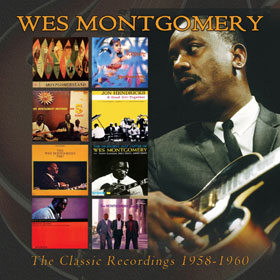 The world’s a much smaller place today than it was a quarter century ago. When I frequented record stores – even once the CD era began – import albums were pricey. They simply weren’t in the budget of the average music consumer in the United States. Things are very different now, thanks in no small part to international retailers like Amazon. American consumers can purchase albums that were heretofore available only in Europe, for example, and have them delivered for retail price plus little more than what they would pay for domestic shipping.

In practical terms, this means that American music buyers can take advantage of the more relaxed licensing/royalty terms that record labels in Europe and the UK enjoy. Licensing a set of eight albums for sale domestically would be an expensive proposition for an American label, and when it comes to jazz – sadly now something of a specialist genre – the costs often outweigh the potential revenue. (How this arrangement affects the original artist and/or their estates is an entirely separate discussion.)

In any event, it’s those modest licensing costs that allow labels to compile and market a set such as Wes Montgomery: The Classic Recordings 1958-1960. (It retails for less than $15!) Jazz guitar pioneer Wes Montgomery burst on the scene at the tail-end of the 1950s, releasing no less than twelve discs for Riverside. (He then left for Verve, and then A&M, before passing away prematurely in 1968 at the age of 45.) Prior to his solo career, he had begun recording as part of The Montgomery Brothers with siblings Buddy and Monk; they would appear on nine LPs between 1955 and 1961. And during that period, Montgomery was also the featured guitarist on albums by The Mastersounds, Jon Hendricks, Cannonball Adderley and other jazz artists.

The Classic Recordings 1958-1960 picks through that vast and varied catalog and compiles eight of those albums onto a 4CD collection. Leaning toward the lesser-known (and harder-to-locate) titles from that era, the set offers a solid survey of the earliest officially-released material in the guitarist’s career. (There are also now some modern-day collections of previously unreleased Montgomery material: Echoes of Indiana Avenue and In the Beginning are essential purchases for the Montgomery fan.)

Here’s a rundown of which albums (originally released on an assortment of labels including Fantasy, World Pacific, Pacific Jazz, and Riverside) are included in the set (all credited to Wes Montgomery unless otherwise noted):

Even on his early sessions, Montgomery was a serious player, surrounded by other serious players. The Montgomery Brothers material showcases the talents of Buddy and Monk (on piano and electric bass respectively) while giving plenty of space for Wes to burn up the fretboard with his assured, smooth-as-butter guitar work. On the Mastersounds record, Wes’ presence is so subtle that he’s barely noticeable (which is not to suggest that the music is not good). The Five Others material expands the instrumental focus to include sax, vibes and more, and is solid, upbeat bop.

Montgomery gets to solo often on the vocal-centric Hendricks album – the singer is reminiscent of Louis Prima crossed with Louis Jordan – but he’s far from the central musical focus of those tunes. Once Wes starts fronting his own trio, the guitar becomes the centerpiece of the music. The production style is also a good bit more up-front and live feeling; Montgomery’s crystalline playing benefits from the change. Montgomery originals fit nicely among the guitarist’s reading of standards. Drummer Paul Parker‘s subtle brush work and tasty Hammond organ from Melvin Rhyne make the trio sides even more appealing. The Trio and solo sides alone are more than worth the modest price of this 4CD set.

Listeners should note that the records’ chronological release sequence is not followed on the 4CD set, though the CDs do feature two albums per disc.

A reasonably detailed (but uncredited) liner note essay helps put the recordings into their historical context. There’s no detail or information regarding remastering (if any), and the provenance of the recordings on this set – needle drops? CD? Master tapes? – is also unknown. The last is unlikely, but the sound quality seems to eliminate the first possibility as well (surface noise can be heard on the Kismet material). Simply put, the fidelity will be just fine to most ears.

Note: Those who would enjoy this set should also take note that the same reissue label has released a second set covering the period 1960-62. It’s a 4CD set as well, and features eight albums that – again – were originally released as Montgomery solo records, Montgomery Brothers albums, and discs by other artists but featuring the guitarist.