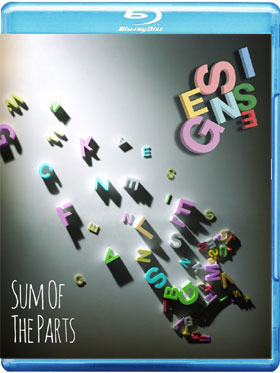 One could say that The Beatles did it first, and thus set the tone and standard for future official biographies. Their Anthology documentary series afforded them the opportunity to tell their story the way they wanted: they could put in what they wanted in, and leave out what they didn’t care to discuss. Creative control coupled with hey-we-were-there access to archival material made for a very satisfying and comprehensive historical document.

It’s fitting that Genesis would get around to mounting a similar project of their own. Though the band splintered several times – they went so far to as call attention to it by titling one of their albums And Then There Were Three… – they seem to have remained on relatively cordial terms with one another.

And so it is that Tony Banks (keyboards), Phil Collins (drums), Peter Gabriel (flute, vocals), Steve Hackett (guitar), and Mike Rutherford (bass, and later, guitar) came together to star in, and oversee, Sum of the Parts. Released theatrically and then on DVD and Blu-Ray, this documentary covers the band’s history, its fractiousness, and its popularity. As Tony Banks is quoted in the accompanying liner notes booklet, “Let’s just put it all out there and people can make up their own minds.”

The film provides plenty of content to allow viewers to do just that. Speeding through the group’s formation and early days, the film chronicles – in chronological order – the band’s history. The footage of the Gabriel-era band is fascinating; truly odd stuff that – whether one likes the music or not (and I very much do) – must be recognized for its adventurous, often groundbreaking nature.

For the most part, Sum of the Parts is a rather candid look at the stress points within the band, issues that would hasten the departures of (most notably) Gabriel and Hackett. When current-day footage of the reunited group (reunited for the film, not to make music) is shown, there’s a pretty clear remaining undercurrent of tension between Banks and…well, the rest of the band. It’s handled with a typical English understatement and reserve, but it remains palpable. 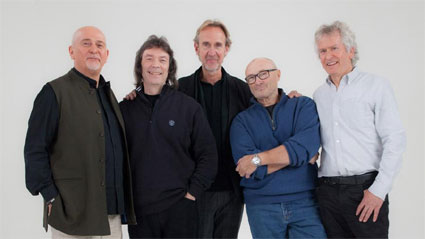 Since their 1974 double LP The Lamb Lies Down on Broadway looms so large in the band’s legend, it makes sense that so much time is spent in the film discussing the album, its development, its tour, and its eventual fallout. The band’s earlier and later material all gets comparatively less screen time. The solo career of Peter Gabriel (who these days looks to all the world like Burl Ives‘ snowman in Rudolph the Red-Nosed Reindeer) gets some discussion, but Collins’ solo work is covered in greater depth. That, too, makes perfect sense, since Collins released his solo albums while remaining in Genesis. (Prog jazz fans: if you’re wondering, Sum of the Parts makes no mention of Brand X.)

A few characters outside the band do weigh in with their onscreen contributions. None is so out of place, however, as Jonathan King. Though the impresario was an important part of the band’s early days, his reputation is so tarnished (Google him if you must) that his appearance onscreen competes with making that “I Can’t Dance” video for MTV as the worst idea the group has ever had.

Lots of live footage and archival photographs help tell the story. Even for those with only a passing interest in the band, Sum of the Parts never drags. The latter-day lineup (specifically Collins, Rutherford and Banks) get just a tad defensive on the subject of having largely ditched their progressive musical approach in favor of a (some would say cynically) radio-ready sound and image (complete with those dreadful MTV-era videos), but it’s hard to see what other approach they could have taken in the film. They couldn’t very well ignore the subject, could they now?

Good question. A wag might suggest that this video would be more accurately titled SOME of the Parts: no mention at all is made – not even in passing – of the group’s 1997 album Calling All Stations. Ray Wilson had taken Collins’ place as vocalist, and guest drummers (including Nick D’Virgilio of Spock’s Beard) took Collins’ place on the throne. But despite the fact that Genesis mounted a 47-date European tour in the first half of 1998, the entire era – and most notably, Wilson’s name – seems to have been purged from the group’s collective memory bank.

Instead, Sum of the Parts blithely skips over the period between 1992 and 2007 (as if to say, “and then – suddenly! – fifteen years passed”) and lands on the group’s semi-reunion tour and live album featuring the Banks-Rutherford-Collins trio plus longtime Genesis drummer Chester Thompson and guitarist Daryl Steurmer. To the band’s credit, both get some additional screen time.

That mild criticism notwithstanding, for fans of the band – or, really, anyone with an interest rock music’s arc of history in the 1970s and beyond – Sum of the Parts is a satisfying, engaging and entertaining video.