“So,” continues guitarist-composer David Torn, “I don’t intend to recreate any of the pieces on only sky in live performance. However, I can accurately recreate the process. Because,” he laughs, “I’m really good at over-intellectualizing anything I do, after the fact. But inside the fact, all I’m really doing…is playing.”

“When I talk, sometimes people expect that they’re going to get this huge intellectual stew out of me,” he says. “But it’s not [the case]. This is what I say, and that is what I play. And they’re very different things. For me it’s all about finding the feeling that needs to be expressed, and following the fairly curvy lines to get there.” 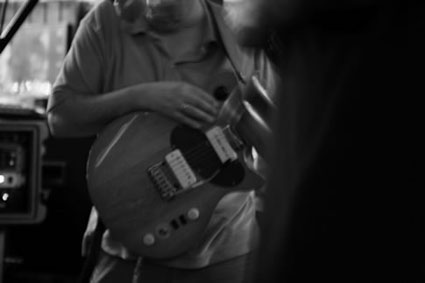 Torn’s method of creating only sky was somewhat unconventional. “It was made in a 1500-seat theatre,” he says. “It was done that way on purpose. I was trying to expand the idea of playing like I play at home. But I love the sound of a big room, so we went to the most incredible theatre that I know of [the EMPA Concert Hall in Troy, NY], turned the lights down, set up all my stuff, and just recorded for two and a half to three days. No studio, no multitracking. None of the professionalism that goes along with being locked in a small room with headphones on. I had no headphones on for this.”

David Torn’s upcoming “house concert” at Streamside provides an interactive experience that differs from the one audiences would find in a traditional concert hall. “On this tour,” he says, “because I haven’t toured in so long, I wanted that. I probably should have looked for even more house concerts. If there are sixty to a hundred people in a room, it’s a much easier way for me to feel what they feel, for them to feel what I feel. And there’s something really appealing about knowing that people are there to engage. It doesn’t feel so much like a show.” Though he’s a fan of the house concert format, his enthusiasm has its limits. “I did one in my own house several years ago,” he laughs. “I’ll never do that again. But I love the idea.”

The guitarist/composer allows that trying to recreate that ambience in a house concert setting is “strange, but it actually fits together. What I was trying to get out of the space of the big room was a space in which I felt free to move around musically. Because that is precisely what I feel when I’m in my little studio at home. I wanted the sound to be able to accommodate that.” 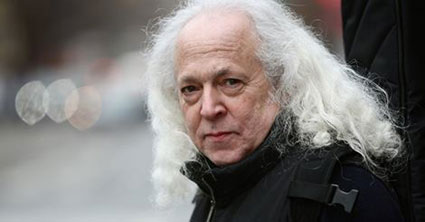 Thinking beyond his solo work, is there anyone new with whom Torn would really like to collaborate? “There are a few, yeah,” he says. “There are a few regrets. I had an opportunity to work with Joni Mitchell in the late 80s or early 90s. But it was impossible to work out schedules. The same thing happened to me with Sting in the early-to-middle 2000s. And,” he grimaces, “I missed working with Ani Difranco because I was an idiot.”

“In terms of the future,” Torn says, “there are a few people that I would certainly like to work with. And they’re not people whom everybody would expect me to say. And…I don’t know if I should even say it, but I’d love to do something – even if it were live – with Gillian Welch and David Rawlings. I also have an idea for a duet project with–” he pauses,  “somebody whom I’m not going to mention.”

But for now, Torn’s immediate focus is on the tour nominally in support of only sky. His website lists early June dates in Washington DC, Baltimore, Carrboro NC, Asheville (June 6) and Atlanta, with others – says the site – “TBA.” Musing on the difference between American and European audiences, Torn sums it up in one word: familiarity. “The audience has always been here in America,” he says. “The problems in the past were amplified by the nature of the business and the size of the country. In one way, it’s easier to advertise in America to everyone. In another way, if you want to experience real live music, it has been very difficult if not impossible for, say, jazz musicians to make a living, not work a day job, and go out and tour the United States. I can easily put a little thing together around my hometown, but these are compounding problems: if I can’t spend a lot of money on recording and distribution and packaging – the look of the thing – then I’m not going to be able to necessarily steadily build a career.

“On top of which, yes, it’s true that we have very little funding for the arts in the United States. Very, very, very little funding. Whereas in European countries – and in South America now – there is governmental assistance and patronage to the arts via people’s taxes. And it’s not – as many Americans seem to believe – useless drivel. It’s something that feeds culture and civilization. And [without that] America suffers in a grand way.”

“However,” Torn adds, striking an optimistic tone, “that doesn’t mean the audience isn’t here. I believe the audience is here. My own tour of the last three weeks show me that my audience is here. There are other things I could do: I could put together a group and play Lars and the Real Girl; that wasn’t just in the film; it was played at the Olympics. I could play Madonna songs. There are lots of thing that I could do that are more commercially attractive – and easier – than what I’m doing now. And yet, people are here. These are some of the best audiences I’ve ever experienced in America. They’re sitting. They’re listening. André [Cholmondeley, tour manager] said to me, “No one’s on their cell phone. There’s no texting going on. No one’s leaving!’ I’m not avant-garde – never have been, never will be – but this isn’t pop music. It isn’t Taylor Swift.” and his working friends – artists like Torn’s best friend Tim Byrne – report similar experiences. “Tim told me, ‘I can’t believe it. The audiences are there!’ People want to hear music that isn’t simply meant only to be sold. I feel very encouraged. It gives me the freedom to explore more; I am going to continue reaching for something to express. And we can all benefit by that.”