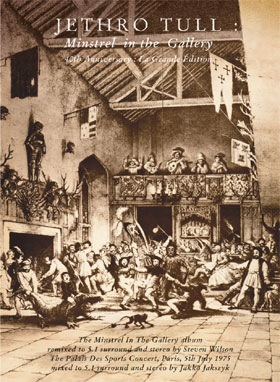 The latest example of Ian Anderson‘s ongoing twofold mission (to encourage a modern-day reconsideration of Jethro Tull‘s back catalog, and to provide be-all-and-end-all versions of those albums) continues with Minstrel in the Gallery: 40th Anniversary La Grande Edition.

The 1975 album spawned only one single a-side release (the title track, briefly appearing at #79 on the charts) but did include one of the group’s best-ever – if lesser-known – cuts, “Summerday Sands,” included on the 1979 pirate/bootleg various artists compilation T’anks for the Mammaries.

Following the established and successful format of the earlier Jethro Tull box/book releases, the new Minstrel in the Gallery provides a Steven Wilson stereo remix. The first disc also includes a handful of alternate/early takes of songs from the album, and a three-song appearance on BBC radio. (As he makes plain in the liner notes, Anderson is not fond of the band’s performance on that BBC session.)

While Wilson’s remix is reliably superb — bringing to the fore previously-buried sonic subtleties – the real jewel of this new set is the second disc. Live at the Palais des Sports, Paris, 5th July 1975 is reason enough to purchase the set. The extremely well-recorded concert has been mixed for release by Jakko Jakszyk (now of King Crimson). While the audience is all but inaudible, this set provides a terrific document of the band’s live onstage prowess in the middle of the 1970s. 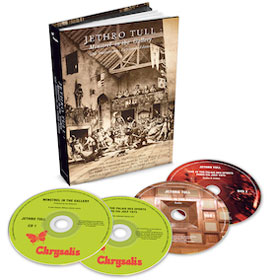 Curiously – at least with the benefit of forty years’ perspective – the concert features hardly any music from Minstrel in the Gallery (only the title track). Perhaps the more acoustic-flavored music of Minstrel was thought not to be of sufficient power to carry live onstage. Whatever the reason, the show is best thought of as a greatest-hits-up-to-now concert by prime-era Jethro Tull. (During its heyday, the band wouldn’t release a live disc until 1978’s Live – Bursting Out in 1978.)

The first DVD in the set follows what is by now a predictable pattern: it provides high-bitrate versions of the album (Surround 5.1), the original stereo mix, and a flat transfer of the 1975 quadrophonic mix.

The fourth disc is something of a red herring. The packaging suggests it contains an audiovisual version of the Palais des Sports concert; in reality it has the Jakko audio mix plus a slide show featuring hundreds of stills from the concert and related visuals. But no moving images.

But wait! That DVD does include nearly nine minutes of video footage from the concert, professionally filmed. It’s superb, and will leave viewers wishing the rest of the footage could be found.

Much is made in the liner notes of the supposed limited musical abilities of bassist Jeffrey Hammond-Hammond. But to my eyes and ears, there’s little evidence to support such carping. Jethro Tull’s music has always been demanding, and both in the studio and live onstage, Hammond always seems up to the task.

The massive liner notes booklet is of the high standard to which all of the Tull reissues subscribe, and it features plenty of discussion of Ian Anderson’s codpieces, for those who are interested in such matters. An essay/interview about the band’s mobile recording unit is of great interest, too, even for those who aren’t fascinated by technical details.

Though it boasts fewer outtakes than most other entries in the Jethro Tull 40th Anniversary Series, the new Minstrel in the Gallery earns its status as the definitive version of the album. The live concert, the images, the remixes, and the booklet make it the comprehensive document of 1975 Jethro Tull.