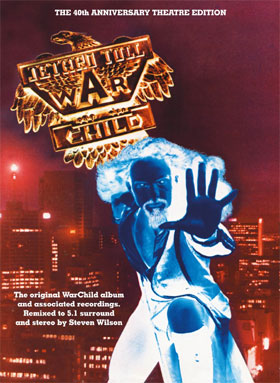 Jethro Tull‘s 1974 album WarChild occupies a curious place in the band’s history. Their previous album, 1973’s A Passion Play, had been roundly shellacked by critics. That album certainly had its fans; it made #1 on the charts, though that might have been a coattail effect of their earlier albums. But by the time of WarChild, the critical honeymoon was over, and the knives were out.

History (revisionist and otherwise) has been kinder to WarChild, however. A contemporary look at it shows that all of the traditional Jethro Tull elements are in place: Ian Anderson‘s provocative lyrics; a degree of thematic unity; lots of flutes; and a generally sardonic musical attitude. And a deeper exploration into classical instrumentation was a hallmark of the WarChild sessions. Moreover, shorter songs were the order of the day.

What those sessions didn’t have, however, was any music that seemed suitable for a single release. For that purpose two songs from the album (but recorded much earlier) were put out as singles, and they remain among Jethro Tull’s most popular and well-known numbers: “Bungle in the Jungle” and “Skating Away on the Thin Ice of the New Day.”

Plans for WarChild originally involved a film, the ambitious premise of which was a battle between Good and Evil. Though a lot of effort went into the initial planning, nothing ever came of the film. Financial difficulties played a part in scuppering the WarChild multimedia production. In the expansive liner notes of the new Anniversary Theatre Edition, Anderson tells readers about the 83% tax rate levied by the UK government, and the band’s failed attempts to avoid having to pay. 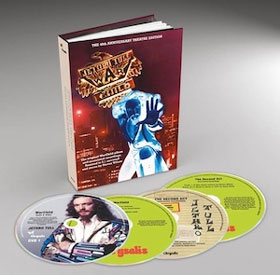 But in the end, it’s all about the music. WarChild has plenty of that; not unlike their previous efforts, the album was designed to be taken as a whole. Though as with all of their albums, the linear narrative matter can (if one wishes) be ignored, and the listener can just dig the theatricality of the music itself.

Over the years, as various related bits of music have been unearthed from the vaults, scattered tracks for the WarChild era have found their way onto reissues and compilations. But the entire approach of this 40th Anniversary series of Jethro Tull albums is to set things right, and (where possible) render all previous releases of the materiel as moot.

Anderson largely succeeds in those efforts with this new WarChild release. The first CD provides a new stereo mix from Steven Wilson, now generally accepted as the master of such things (he’s done similar duties for King Crimson, Yes, Caravan and other 1970s progressive legends). The second disc is filled with related recordings: alternate versions, outtakes, and songs that simply didn’t make the cut of what was originally planned as a 2LP set. It’s worth noting that these tunes are in most ways every bit the equal of the already-released material. And the production values (no doubt aided by Wilson’s remix skills) are first-rate. The hard-rocking “Saturation” is a standout among these. And though he pretty well disowns it these days, Anderson’s saxophone work is impressive. And Jeffrey Hammond-Hammond‘s rocking and idiosyncratic “Sea Lion II” shows that Anderson wasn’t the only one who could write lyrics that fit the Tull mold.

The vibraphones and classical trappings of the ambitious “Quartet” aren’t exactly commercial (from a rock-fan point of view), but they’re fascinating nonetheless. But perhaps the most fascinating part of this new set’s audio portion is the ten tracks of orchestral pieces, only one of which (“Waltz of the Angels”) has been released previously. In fact with the exception of the orchestral “The Third Hoorah” and bits of “The Orchestral WarChild Theme,” none of the orchestral tracks are directly related to the WarChild album as originally released. But taken together, they make a fairly substantial classical (or pseudo-classical) work. At times these tracks feel a bit like film music, which makes sense when one knows that the original project envisioned a film.

A pair of DVDs rounds out the audiovisual component of the new WarChild box (book) set. As is now customary, these include a Surround 5.1 mix (the modern-day equivalent to quadrophonic) as well as a transfer of the original quad LP from 1974. The first DVD also includes silent color footage from the band’s press conference in Montreux, Switzerland, with new (and predictably droll and witty) audio commentary from Anderson. A multi-camera live shoot of “The Third Hoorah” is included, but the blurry footage features studio audio applied to it; no attempt is made to sync the audio and video, but it’s clear that the band is actually playing that song. The fourth DVD includes high-bitrate audio versions of the material from the second CD.

An 80pp booklet provides all of the detail one could ever hope to place WarChild in its historical context, along with lots of photos and additional relevant material. Detailed discussion of (and by) the bewigged female string quartet that joined Tull on the WarChild tour dates will give readers a flavor of what 70s touring was like.

The net effect of this new set is to effectively rehabilitate WarChild, to lead modern-day listeners to reconsider it and its worth. Listening, watching and reading, you may well decide that WarChild is a far, far better thing than you had thought before.