One of music’s greatest guitarists, Larry Coryell has enjoyed – and continues to enjoy – a long and storied career. After his professional start playing with Chico Hamilton, Coryell launched a solo career, enlisting the musical help of some of the most innovative, boundary-pushing musicians to aid in his own musical explorations. He’s played in most every style, and one of the qualities that differentiates him from many of his contemporaries is that he does so with an unparallelled level of authenticity; there’s no whiff of dilettantism in Coryell’s excursions into hard rock, soul jazz, classical, acoustic, or other forms and styles.

Being such a restlessly varied musician carries with it a price, as others in the rock idiom know too well; I’m thinking here of artists such as Neil Young. When you can’t be counted on to make an unbroken string of recordings in roughly the same style, you’re hard to market. Thankfully, Coryell has sustained a career that lets him remain safely above such concerns. The result is a buffet of musical wonders. And though the man rarely looks back (as he told me, he has little or no interest in his back- catalog, and he has no control over it either), there’s nothing – other than the scarcity of some of those discs – that prevents listeners from exploring his older material.

And modern-day listeners have the best of both worlds. Two new releases make this plain: Coryell has just released another new album on Wide Hive Records, Heavy Feel, and something called the LiveLove Series has a new archival release of a January 1975 concert recording featuring Coryell’s underrated and under-appreciated fusion ensemble, The Eleventh House. What follows is a look at both of these new releases. 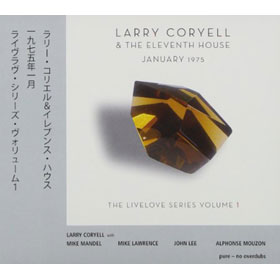 Larry Coryell & The Eleventh House – January 1975
At the time of this recording, Coryell’s Eleventh House were near the peak of their powers and popularity. Thanks to the foresight of Radio Bremen, prime-era Eleventh House were captured onstage in Germany. This flawless recording documents twelve numbers from the show, including three compositions that have never been released before in any form. After grabbing the audience’s rapt attention with a fiery “Bird Fingers,” The Eleventh House settle into a groove that showcases the many talents of Coryell and his bandmates: Mike Lawrence on trumpet and flugelhorn, bassist John Lee, keyboard whiz Mike Mandel (by this time, a longtime Coryell associate), and powerhouse drummer Alphonse Mouzon.

It’s worth recalling that in the early and mid 1970s, musicians could get away with making music that didn’t invite easy classification. Is this stuff jazz? Rock? Fusion? It’s often all three at once; listeners unfamiliar with The Eleventh House might appreciate knowing that their approach is in roughly the same vein as John McLaughlin‘s work with Mahavishnu Orchestra, but perhaps leaning a bit more toward smaller, less busy (or cluttered if you don’t dig the approach) arrangements.

January 1975 features tunes from the 1974 debut Introducing the Eleventh House, and Level One, which was either very recently or (more likely) soon-to-be released. The highlights of the entire show, however, are Coryell’s “Low-Lee-Tah,” and Mouzon’s aptly-titled “Funky Waltz,” both from the debut disc. An extended version (twice the length of its studio counterpart) of “Suite (Entrance/Repose/Exit)” is pretty thrilling, too, what with Coryell making intelligent use of the wah-wah pedal (a device pretty well thought out of fashion by ’75) while his bandmates show that horns and analog synths can coexist (though not exactly “peacefully”).

Those three previously-unheard tunes are Mouzon’s blindingly fast “Tamari,” a Mandel multi-keyboard showcase called “Untitled Thoughts,” and a Coryell one-chord workout to close the set, “The Eleventh House Blues.” All are worthwhile, and hold up when considered alongside The Eleventh House’s official canon. 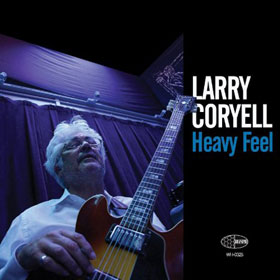 Larry Coryell – Heavy Feel
One could argue that in 2015 Larry Coryell has a lot less to prove. As such, he could – should he choose – rest on his laurels, reiterating what he’s said musically. But that doesn’t seem to be his approach. Not counting some contributions to a compilation, Heavy Feel is Coryell’s third album working with The Wide Hive Players. Produced by label head Gregory Howe, the album features Coryell on both electric and acoustic guitars, joined by bassist Matt Montgomery, drummer Mike Hughes, and George Brooks on soprano sax.

The slow burn is the favored approach by the ensemble for most of Heavy Feel‘s nine tracks. “Ghost Note” is an exemplar of that approach, with the band subtly laying down a backing while Coryell plays thickly chorded jazz guitar. After Coryell’s exhortation to his fellow musos, the ensemble launches into the romantic “River Crossing,” with Coryell providing ace acoustic support while Brooks takes the lead. There’s a north African feel to the tune. When Coryell executes some lightning runs on the fretboard, he moans along somewhat tunelessly; it’s either maddeningly annoying or disarmingly endearing, depending on your point of view.

Some reviews of Coryell’s first outing on Wide Hive noted that the disc was a bit less powerful than it could have been. Whether in response to that criticism or simply as a function of where Coryell and his bandmates chose to go, Heavy Feel does live up to its title. It’s simultaneously subtle and understated while rocking.

The title of “Polished” must be meant sarcastically, because Coryell’s playing here is anything but. It has the immediacy of a first take, and could almost be called sloppy. But it’s good. The title track finds the band laying down a garage-band foundation, but the players still find interesting things to do with it musically.

“2011 East” returns to a jazz vibe vaguely suggestive of what The Bill Evans Trio might have sounded like without a piano (and with a guitarist and sax player). “Sharing Air” goes for the boogaloo, sounding not unlike something The New Mastersounds might cut in a late-night session. “Jailbreak” is not a jazz-rock reading of the Thin Lizzy classic; instead it’s a marching tune with Coryell and Brooks playing lockstep (and then call-and-response) as they execute some exceedingly trick (yet tuneful) melodic lines. It’s a highlight of Heavy Feel. The disc closes with “Foot Path to Oasis,” a return to the sound and vibe of “River Crossing.”

Heavy Feel isn’t Larry Coryell’s most groundbreaking album. But it’s thoroughly enjoyable and – as a document of where the 72-year-old guitar master is today – a recommended purchase.