“I meet some people, and they say, ‘Oh, you’re a musician? You’re never going to eat,’” says the singer-songwriter/guitarist/namesake of Andrew Scotchie & the River Rats. He recently finished a record that responds to the starving artist stereotype: “Like the title of our album says, we all stay hungry. And we’re happy about it.”

Initial tracking for We All Stay Hungry took place in Asheville at Sound Temple Recording Studios, with the bulk of recording, overdubbing, mixing and mastering completed at Eagle Room. A single, “The Best in You,” featuring a guest vocal by local sensation Lyric, was released on April 1. The full record debuted at a release party — a free show — on Friday, April 17, at Highland Brewing in Asheville NC. 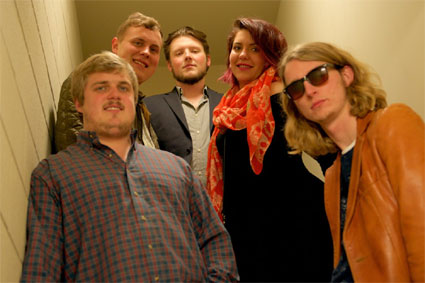 There’s a story leading up to that release. In early 2012, Scotchie started a busking duo on the streets of Asheville. “We had always played electric music,” he says. “But [acoustic] busking was my way to get back to the core of everything.” Through the process of interacting with other musicians, “we just met a lot of people who wanted to play.” The plugged-in version of Andrew Scotchie & the River Rats eventually formed around a nucleus of lifelong companions. “Eliza [Hill, drummer] and I have always been friends,” Scotchie says. Eliza’s brother Asher Hill joined on bass and keyboards.

The resulting trio created an original sound that at times suggests a scaled-down Drive-By Truckers. It was that lineup that recorded the band’s first album, Soul and Sarcasm. The group booked plenty of live dates, earned radio play and even got rotation of one song on a Nashville-based cable TV network.

Onstage, the trio was sometimes joined (“for a couple of songs near the end of the show”) by a pair of horn players, Alex Bradley and Kyle Snuffer. Scotchie recalls that the pair came to him at one point and said, “Hey, we can play the whole set. Just give us the opportunity.” So two more longtime friends rounded out the group: “We [had gone] to school and Boy Scouts together,” Scotchie says.

Having a five-piece band changed the way that Scotchie wrote songs. He would start thinking, “I’ve got the chords; I’ve got the words. What are the horns going to be doing?” The result was a more deeply textured brand of music than before. “A lot of people think rock ‘n’ roll is simple,” Scotchie says. “But so many different elements can go into it: jazz, fusion and even big band.” His newer songs highlight the funkier elements in his songwriting.

And though Scotchie is the leader, the band arrangements grow out of collaboration, out of live performance. “A lot of the horn parts are things that Alex and Kyle came up with on the spot,” he says. “Right onstage. They’d try something, and we’d all say, ‘Yeah. That’s the one.’” The collective showcases its cohesive strength on We All Stay Hungry.

And the band is committed to music as a lifelong pursuit. “I want to be busy, I want to have a schedule, and I want respect,” says Scotchie. “Looking back at this time last year, I’m really happy with where we are now.”

An edited version of this feature was originally published in Mountain Xpress.