The Broadcast Will Continue Touring After This Important Local Message

“We can jam, but we are definitely not a jam band,” says Caitlin Krisko, vocalist and songwriter of The Broadcast. Her band’s albums feature shorter songs because “we write songs; we’re songwriters.” Krisko and guitarist Aaron Austin are co-writers on all of the group’s music, which is as tight and concise on record as it is soulful and exhilarating live onstage.

“My favorite artists are storytellers,” Krisko adds. “I think that it’s really important that we continue to tell stories about our lives,” she says, describing music as a means to create “a sense of oneness between artist and listener.”

Coming out of a tumultuous year that saw two of its founding members depart, Asheville-based (though originally from Brooklyn) The Broadcast is gearing up for what looks to be its busiest year yet. The buzz around the group’s set at 2014’s Warren Haynes’ Christmas Jam led to an invitation to perform at an Allman Brothers Band tribute event being planned for this summer. And while preproduction for a second studio album is well underway, The Broadcast scheduled a local performance (Saturday, April 11, at The Grey Eagle) before returning to the road and then to the studio. 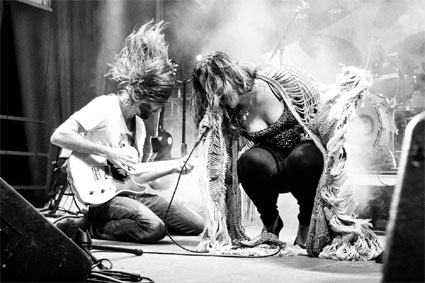 “So much has changed since last year,” Krisko says. “I am really proud of the core members who were able to make it through this transition,” and now the band is “committed on an even deeper level.” Krisko and Austin and percussionist Tyler Housholder remain from the original lineup. Observing that making music for a living is not the easiest path, Krisko believes that “you have to be willing to lose everything for it.”

The Broadcast’s members are savvy users of modern technology as a means of building relationships with fans and potential fans. While acknowledging the advantages of that technology, Krisko believes that instant, accessible quality also disconnects the listener from being able to discover new music. That means in order to break through, a band has to be better and then market itself better. Krisko is optimistic and determined: “Touring on the road has given me a sense of hope that there still are people who want to come together, connect and share in a joined experience.”

Krisko focuses on two important components of the band’s overall strategy: “The live performance emotionally grabs people; the vibrations literally have an effect on their bodies.” And the album is a souvenir, a package that concertgoers can take home to relive the experience of the show. “You can’t completely capture the live experience on an album,” Krisko says. “Where a great producer comes in is being able to capture that energy.”

For The Broadcast’s first album (2013’s Dodge the Arrow, recorded at Asheville’s Echo Mountain Studios), the band worked with producer Eric “Mixerman” Sarafin. “We were so blessed to have one of the most positive first-album experiences,” Krisko says. But the musicians came away from that experience knowing what they would do differently on the next album. For their second recording, Krisko and Austin wanted a producer who truly understood how to record a female-fronted band. They wanted someone like Jim Scott, who produced and engineered albums for the Tedeschi Trucks Band, Wilco and other big names.

“So I emailed [Scott] last November,” Krisko says, “and when I woke up the next morning, I had an email from his people. I screamed!” Scott said yes. And with a large catalog of new material from which to choose, Krisko is confident that The Broadcast’s upcoming album (out early 2016) will please longtime fans while earning new ones.

An edited version of this feature was previously published in Mountain Xpress.