I laughed and expressed my surprise that the sometimes singer/songwriterly Lloyd Cole is a fan of 1970s krautrock. “I’m going to be in Berlin in September, making my debut as a modular synth player onstage live,” he told me. I asked him if he’d be wearing a cape. “I haven’t thought about my outfit yet,” he said. “More importantly, I have to compose some pieces specifically to perform live. Which is,” he said with dry understatement, “a bit different than playing a song live. There will be all monosynths, though you’ve got some polyphony via the use of oscillators.”

On one level, the project represents some uncharted territory for Cole. “I haven’t exactly mapped out what I’m going to do yet,” he said. “I’ve only just accepted the contract to do it.” But the endeavor is not wholly without precedent for him. “Six months before Standards came out, I released an album with a guy called [Hans-Joachim] Roedelius, from Cluster. We made a record called Selected Studies Vol. 1. And I made an instrumental record in 2001 called Plastic Wood. And frankly, if you knew Cluster and you knew Roedelius and you listened to Plastic Wood, you’d say, ‘Ah, Cole must be a Cluster fan.’” 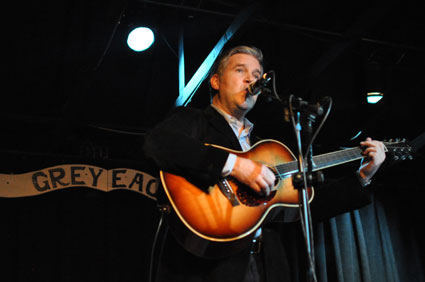 Roedelius is a fan of Plastic Wood. “He even took a copy of the album and put overdubs of his own on it,” Cole told me. “He said, ‘Why don’t you put it out?’ I said, ‘But I can’t! I’ve already released the album!’ So he suggested that maybe we could do something else like this together. It just took ten years for us to get around to doing it.” The two composers brought deliberately unfinished pieces to the project, completing each other’s work. Their working methods are a study in contrasts. Cole said that Roedelius “is a virtuoso, and he can think on his feet. I, on the other hand, construct structures which allow other people to be virtuosos on top of them.”

Cole is clearly excited about the upcoming project. “In Berlin in September is the celebration of [Roedelius’] 80th birthday. And they’re having a festival, or a series of events, for it. And they’ve invited me to perform. Maybe something on my own, and maybe something collaborating with him. It’s exciting, and slightly frightening.”

We went on to discuss the Big Ears Festival, taking place in Knoxville the day after our meeting. Cole mentioned his love of the work of Steve Reich. I observed that composers like Reich and Philip Glass approached minimalism from a classical background, compared with Brian Eno, who came from the rock idiom. “But where they ended up,” I said, “isn’t all that different.” Cole agreed. “I discovered all this type of music as a kid, purely through the fact that I liked Eno and [David] Bowie. I went to see Steve Reich at the South Bank Centre in 1979 in London. I didn’t know anything about him; all I knew was that Bowie liked him.”

Our conversation eventually rounded back to Standards. The album was initially a more or less self-released item. “I gambled on people liking it,” Cole said, with the hope that eventually an American distributor would pick it up. “It still took a little longer than I wanted,” he said. He got several offers, in fact, but settled on Omnivore Recordings. “They were the ones who seemed the most enthusiastic about it. There’s only four people there, but they have a lot of energy.”

Between all of his current activities – live gigs, chatting with journalists about Standards, writing more songs, preparing for the Berlin show – Cole is quite busy. But there’s even more. He told me that later in 2015 there will be a Lloyd Cole and the Commotions box set, a “sort of semi-completist thing” that will gather all of the group’s material in one package.

Cole has been writing and recording his songs for more than thirty years now. As we finished our drinks, I asked him how his approach to songwriting has changed over they years. “I think one of the negative things is that I know what I’m doing now,” he said. “On Rattlesnakes, I just had an idea, and everybody trusted me. And we got lucky. As soon as I started to analyze what I was doing, I got worse at it.” He said that knowing what he is doing is “sometimes an advantage, and I think I’ve got to the point now where I’m past the point where it’s not a disadvantage any more.” He cited the adage of talking [actually writing] about music being like dancing about architecture. “Trying to explain music with language is very difficult. You’ve got to give people a frame of reference, when you’re trying to tell people what you want them to play. So you have to give them reference points.”

Cole went on to make a thought-provoking observation. “Having naivete when things are going well can be a huge advantage. Because you never think of the worst; you never think you’re going to fail. So that’s lovely. Trying to make a record almost thirty years later, you don’t have that. And you can’t fake it. I think that now I know how to make records. I don’t necessarily think I’m very good at it in terms of being a producer, but I think I know what a good producer is. I wish – and I’m not sure if there is enough time in my life to do all these things – I don’t know if I could be that person. A good producer is not somebody who tells people what to play. A good producer is somebody who makes people feel good about themselves when they’re playing. And if they’re not going in the right direction, he somehow or other points them in the right direction by making them think it’s their idea, not his.”