Rick Wakeman, Cannonball Adderley, and Me

Today I’m going to indulge in a brief change of pace. I’d like to tell you about a pair of reissues with which I am involved. I won’t be reviewing either title – what would be the point? – but suffice to say that if I didn’t think they are superb albums, I wouldn’t have written the liner notes. 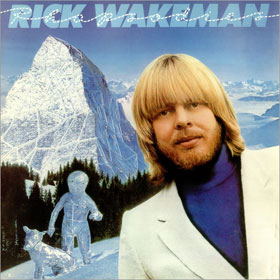 The first, reissued earlier this week, is Rick Wakeman‘s final album for A&M Records, Rhapsodies. This 2LP set capped his association with Herb Alpert‘s label; the Yes keyboard player’s first album – The Six Wives of King Henry VIII – remains his best-selling (and arguably best) album, but Rhapsodies is a successfully varied lot as well. Though he had employed vocalists on some of his earlier A&M albums (even Rick Wakeman’s Criminal Record, another album reissued with liner notes by yours truly), for Rhapsodies, Wakeman stuck to his strengths: piano, organ and synthesizer. A crack band is on hand, and as often as not they play in what might be termed a disco fashion, but the results are not nearly as gruesome as that description might suggest. Flashes of humor are shot through the album, and save for an interesting misstep (a bizarre reading of Gershwin‘s “Rhapsody in Blue”), Rhapsodies is a highly recommended album. My liner notes contextualize the album and even sort of review the tracks therein. 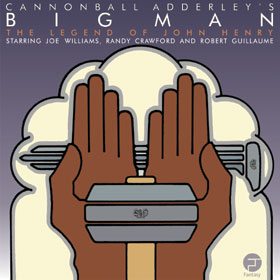 Out next week is an album that’s near and dear to my heart. I’ve written often about how the music of Julian “Cannonball” Adderley changed my life, serving as my adult gateway into jazz. (Audrey and I even had “Mercy Mercy Mercy” played at our wedding last year.) Adderley’s final project was also his most ambitious: a sprawling double LP that combined Broadway, blues, folk tale, avant/free jazz, funk and more. Big Man: The Legend of John Henry was met with mixed reviews upon its release shortly after Adderley’s untimely death. But it’s a fascinating album, with a modern-day allegory that (to my mind, anyway) spoke to the Black Power concerns of the early 1970s through the retelling of a Reconstruction-era folk tale about the “steel drivin’ man.” Famed actor Robert Guillaume (known to a generation as Benson, a core character on Soap and later a self-titled sitcom) got one of his first big gigs providing vocals for this album. And Mr. Guillaume consented to an interview with me, which formed the basis of my extensive liner notes. I also did the package design for the reissue (which includes the entire work’s libretto) and got my first (co-) producer’s credit on an album.

At present I’m writing liner notes for another upcoming reissue, Iron Butterfly‘s classic Ball LP, which will be out later in 2015. With luck, there will be other projects to tell you about in future days.