Paul Lacques: Actually thirteen; we did these sessions in 2002. Y’know, we feel kinda bad. We did the sessions, and thought, “That was weird.” And then we went our separate ways. Then Marc went into mad scientist mode, and sent some mixes. But we didn’t know what to do with all of this. In a way, the mix that evolved over a decade into something that could be on a CD.

BK: I suppose it’s fair to say that the free-form approach you brought to the sessions was informed by everything you had heard and done before. And so now you’re thirteen years older. How do you think the sessions might have been different had you recorded them in 2015 instead of 2002?

PL: That’s an excellent question. We all would have been in a million bands since, but I’ve go to say that I think it would be fairly similar. Maybe some more advanced concepts. Maybe different effects boxes that the guitar players are using.

But we’re pretty much who we are. The band is made up of some pretty strong personalities. I think it would have been fundamentally the same. Stew came out in the fall [2014], and we did a live show. We didn’t know the songs at all; we just played ’em. It was kind of live renditions of song he knew but we didn’t! And it went really well. I think our love of the unknown is still intact. So I think the sessions would have turned out just as well if they had been done today, because we’re just as naïve and willing to try new things.

BK: Panorama City is an unusual project, to say the least. Do you think that the American Composers’ Forum got what they bargained for with the end result?

PL: They’re very cool. We lost touch with them over the years; there was a period when we were doing some pretty avant-garde music, and someone heard it and interpreted it as “modern classical!” [laughs] So we’re hanging with the Cal Arts serial, atonal musical academics with their banks of synthesizers. Some of the meetings were crazy. We’d do some song, us being this brash rock band. And I think half of them were offended. 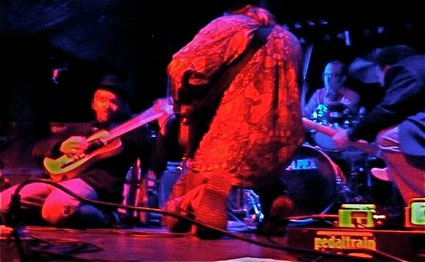 But the people that ran it at the time – the L.A. chapter – were really pushing us and helping us. And they actually suggested that we write the grant. And it was very open-ended; that’s the thing about this forum. It’s made up of people whose main goal is to break the rules of what’s considered music. So I think they had no expectations. If anything, it might have turned out a little more reasonable sounding than they had expected. They might have been expecting white noise or an Ornette Coleman kind of chaos. But oddly enough, it didn’t turn out that way. It turned out far more structured than any of us had guessed. And to me, that’s the most surprising thing about the whole project: it sounds like pop music.

BK: I wonder if that’s because fundamentally, you have a popular music sensibility. So that even when you’re being experimental, the music is grounded in, for lack of a better word, accessibility.

PL: For sure. We all grew up playing Rolling Stones songs, blues, and country music. For Marcus Watkins and myself as guitarists, country and blues is sort of our first vocabulary. Our bass player Marc Doten was raised on more of a jazz band [foundation]. He can play classical piano. Same with Joe [Berardi, drummer]. They went to music school. And Marcus has developed very sophisticated skills over the years. I’m probably the least schooled at this point.

We all came up with a shared taste for what I guess could be called the experimental. But we come out of rock, for sure.

Thank you for appreciating what we’re doing. It’s not for the faint of heart!