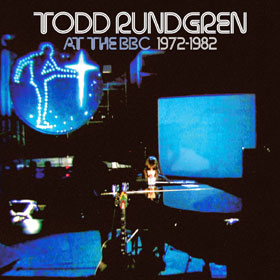 Several years back, Todd Rundgren took a proactive approach to the myriad live recordings that exist documenting his long and varied career. A true renaissance man who engenders fierce loyalty in his fan base, Rundgren may still be a “cult artist,” but he’s one of the most well-documented ones. For many years (during the tape- and CD-trading era) a surprisingly large network of Rundgren fans recorded, collected, cleaned-up and traded recordings of nearly every show the man ever did. So there’s a massive list of live shows dating back to the very early 1970s, and including Rundgren’s various guises: solo artist, member of the early progressive-phase Utopia, member of the more pop-leaning Utopia lineup, collaborator with Bourgeois Tagg, Hello People, Ian Hunter, Joe Jackson and many others…on and on.

But there aren’t just audience bootlegs out there. From his earliest post-Nazz days, Rundgren has appreciated and embraced television and radio performances as a means for reaching potential fans. As such, there are “board tapes” and/or professionally recorded documents of pretty much every tour he’s ever done. And as he sought to have the best among these released officially, the trading market has somewhat died down (by and large, Rundgren’s fans are an ethical lot; they want him to profit from his work).

The latest entry in the “Todd Rundgren Archive Series” is a near-comprehensive collection of his work for the British Broadcasting Corporation. At the BBC 1972-1982 is a 3CD + 1 DVD set documenting four concerts (three in audio, one audiovisually) and various other related bits and bobs.

The first disc showcases an early solo gig Rundgren did for BBC’s Radio One. An excellent quality mono recording from 1972 finds Rundgren at the piano, using backing tapes to accompany himself. An experienced studio rat even then, he created “karaoke” versions of his hits, allowing him to present them in a live onstage manner that combined the precision and arrangement of a recording with the spontaneity of a live show. Of course such an approach is old-hat now, and has been since the dawn of MIDI (musical instrument digital interface), a digital means of syncing multiple sounds sequences. But in 1972 it was innovative stuff.

Even with the confining nature of the backing tapes, Rundgren delivers an off-the-cuff, intimate performance, most notably on the Something/Anything? tune “Piss Aaron.” Few would count the tune among Rundgren’s best, but his onstage delivery of it is undeniably entertaining. And the inclusion of “Be Nice to Me” from his early album The Ballad of Todd Rundgren is a rare and welcome delight. Rundgren even rocks out at the end, turning in a performance of “Black Maria.”

The first disc also includes two songs from the BBC’s Old Grey Whistle Test television program(me). These feature the seven-piece Utopia in 1975, performing “Real Man” from his solo album Initiation) and “The Seven Rays,” a highlight of the Utopia Another Live LP (The package’s DVD also features a/v versions of these same two performances).

Speaking of Another Live, the second disc of At the BBC 1972-1982 is similar but expands upon the content of that set. Utopia’s set of the time (1975) included material from Rundgren’s solo albums in addition to their own songs. The BBC disc features a full concert (or at least something approaching one) in excellent stereo, and as such includes songs that weren’t on the single LP Another Live set (recorded elsewhere). Rundgren introduces “Freedom Fighters” as “the first Utopia single” that was never released. The studio version of the tune was on the group’s debut LP; at nearly six minutes, the live reading here is nearly half again as long as its studio version. Live versions of “The Last Ride” and “Sons of 1984” showed up on other Rundgren albums (Back to the Bars and Todd, respectively), but here they’re presented in the context of a full Utopia concert. And “Sunset Boulevard / Le Feel Internacionale” from A Wizard / A True Star hasn’t been released in a live version before (possibly excepting other archival releases), and it’s a highlight of this set.

By 1977 and time of the Utopia Radio One “In Concert” set documented on disc three, Utopia had pared down to a foursome: Rundgren on guitar, Roger Powell on synthesizer, John “Willie” Wilcox on drums, and Kasim Sulton replacing John Siegler on bass (“all four boys sing,” as they say). Touring to promote both the transitional album Ra and the more mainstream-rock oriented Oops! Wrong Planet, the group performed newer material from those albums, with a quick dip into Rundgren’s solo catalog (“Love of the Common Man” from Faithful) and the set closer “Utopia Theme.” The tighter, compact lineup meant an emphasis upon shorter, more concise songs, but the band still stretches out instrumentally on some longer pieces.

As previously mentioned, the fourth disc in the At the BBC 1972-1982 box set is a DVD. All three sets included are sourced from the TV show The Old Grey Whistle Test. The first (mentioned above) features two songs from a 1975 broadcast. The second (from May 1978” documents “The Bearsville Picnic” (the Albert Grossman-headed Bearsville Records was Todd’s and Utopia’s label at the time) and features the extended “Singring and the Glass Guitar (An Electrified Fairy Tale)” from the proggy Ra album.

And the final set of performances on this set brings things full circle in a way, featuring Todd solo in 1982, this time without the gimmicky backing as he winds his way through a solo material set. The performance – featuring Todd variously on acoustic piano and 12-strong acoustic guitar, and even electric “Fool” Gibson SG on “Tiny Demons” – highlights songs from his Hermit of Mink Hollow LP, and includes the innovative “Time Heals” promo video, one of the earliest clips ever broadcast on MTV (the cable channel had premiered the previous fall). Two songs are included that were recorded but cut from the original broadcast: “The Song of the Viking” (originally on Something/Anything?) and “Lysistrata” (a full group performance of which could be found on Utopia’s Swing to the Right album). His reading of “Compassion” (one of his best but least-known songs) is a highlight. Because of the vintage of the video material, it is presented in old format (4:3 ratio) as it was originally broadcast.

Each of the four discs is encased in a mini-LP style sleeve, and the whole affair is in a box slightly larger than a double-CD. A sixteen-page booklet includes photos and an informative essay by Mark Powell.

Taken as a whole, At the BBC 1972-1982 is essential for the Rundgren fan who must have it all, and recommended equally to the relative novitiate looking for an entry point into Rundgren and Utopia’s large catalog.

You may also enjoy: my career-spanning critical look at all of Todd Rundgren’s output (now quite outdated, but worthwhile nonetheless).