Unlike their earlier deals with other labels, Pugwash‘s recent A Rose in a Garden of Weeds is not a one-off licensing deal. “Omnivore is our label,” Thomas Walsh says. “At this stage in our lives, we try to hold onto our records, but when it comes to Omnivore, they’re definitely our label. And we’re so proud and honored to be with them.” He goes on to reveal that the label has plans for Pugwash’s older material as well. “They’re doing full catalog remastering of all our albums. They have great people running the label from top to bottom. To say they’re seasoned campaigners would be an insult, really. They’re incredible successful music people.” He name-checks Cheryl Pawelski and several others at the label. “And it’s been Lee Lodyga, of course, who’s been our staunchest supporter. He’s a huge fan. And he’s taken on a lot more [with us] than he planned, I’m sure.” 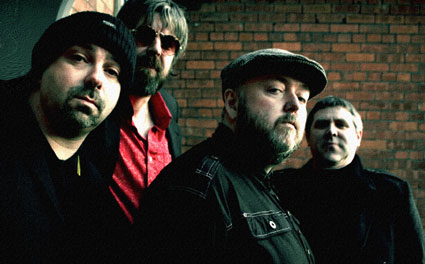 Walsh reflects on the traditional relationships between artist and label. “There can be a lot of miscommunication between America and us in Ireland. Because we can be lazy fuckers, and Americans are so full of of energy. Noting that he’s long since put hard drugs and drink behind him, he chuckles and wryly characterizes Americans’ high energy level: “It’s consistently like they’re on drugs! And you know that they’re not on drugs. We equate it with a drug thing, but it’s really a lifestyle thing! These people are incredibly energetic and passionate. When you meet them you ask yourself, ‘Are these people freaks?’ They’re beautiful; they put us to shame. After a gig, we go back to our hotel room, and I think, ‘We’re a fuckin’ disgrace.’ But the energy that Lee has put into Pugwash is incredible. It would take us ten weeks to do [in Ireland] when they do in ten minutes in America.”

Pugwash did a brief US tour in late 2014 to support A Rose in a Garden of Weeds. “That tour was such an eye-opener,” Walsh says. “It was incredibly quick. And Omnivore have done exactly what they said they would, right from the very beginning. It’s not like some other labels where they try to do everything; they do what they do. Our drummer Joey [Fitzgerald] gets the gigs. We know what we have to do, and so does Omnivore. It’s a great relationship. I’ll be honest with you: I’m forty-five now. And most of us are in our forties. And even if in five or ten years if we say our goodbyes, I’ll still love these people. Straightaway, they’re friends.” I remark how unusual such comments are. “Well,” Thomas retorts, “They’ve been nominated for a Grammy. And I’m just trying to get an invite to the awards ceremony.”

Pugwash’s compilation A Rose in a Garden of Weeds is available from Omnivore Recordings, and the group’s as-yet-untitled album will be released on Omnivore sometime in 2015. Also keep an eye out for Omnivore reissues of Pugwash’s back catalog (five albums originally released between 1999 and 2011), and for Pugwash’s limited number of stateside concerts in March 2015 (mostly in the Northeast).