Some listeners might peg the music of Pugwash as “retro,” though in reality it’s classic pop in the best sense of the word. Many reviewers have pointed out sonic similarities between Thomas Walsh‘s voice and Jeff Lynne‘s. But the hallmark of Pugwash’s music is the song construction. At its best, it’s on a par with the finest efforts from writers such as Difford and Tilbrook (Squeeze), Neil Finn (Split Enz and Crowded House), and Paddy McAloon (Prefab Sprout). Walsh is modest when mentioned in the same breath as those names. “If I knew the hallmarks of a successful song,” he says, “I’d have written a hit by now! The thing is, I do know – and I’ve known for a long time – if you have any talent for writing a song, there are certain tricks you use.” He goes on to explain his craft in a bit more detail. “There’s a lot of chords in my songs. But they won’t do much else than repeat themselves.” Exaggerating slightly to make his point, he says, “If there are twenty-four chords in one of my songs, they won’t jump all over the place. They’ll stay in a nice little cage and wait to be fed. And I don’t do a lot of ‘bridges.’ At least I don’t think I do; I never check!”

“Funnily enough, Neil Hannon [of fellow Irish band The Divine Comedy] was over the other day, helping with stuff for the new record. There’s a song called ‘Oh Happy Days.’ The demo of it was up on the pledge site [for crowd funding of the next Pugwash album, due out in 2015]. So Neal says to me, ‘Did you ever even think of bothering your ass to write a second verse?’ I said, ‘No, nope…No.’ And he just laughed. The great thing is that Neil and I work so great together. He probably would have written an eight-verse life story of how happy the old days were, and how sad it could be now. That’s Neil, and I love him. But with me, it’s, ‘Oh happy days,’ then “ba ba ba,’ and then…goodbye. In two minutes.” 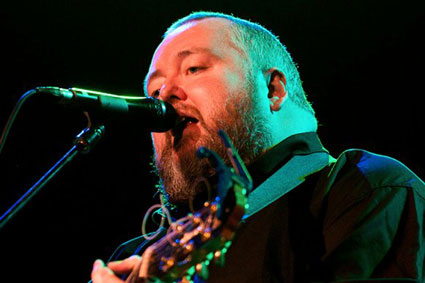 Walsh is an avowed fan of the leave-them-wanting-more style of songwriting. “There’s so many songs that I love, where you think, ‘Ohhh…this is going to be great for three and a half minutes.’ And then boom, it’s gone. That’s especially true of ’60s bands like The Kinks. And The Lemon Pipers. I’m such a fan of their ‘The Shoemaker of Leatherwear Square.’ It’s so short, like a minute-forty or something [actually 2:01 – ed.] I have to play it six times to get the feeling of having heard it once. There’s all that arrangement – harps, and flutes – and they did all that for such a short song!”

I point out the contrast between that approach and the one used on such tracks as Bob Dylan‘s seven-minute, nine-verse opus, “Stuck Inside of Mobile With the Memphis Blues Again.” Walsh replies, “I was an anti- ‘leave them wanting more’ person when I was younger. But I remember when I first heard Michael Penn‘s Free for All. I had to import it from Canada because you couldn’t get it in Ireland. ‘Free Time’ is the fourth track. And on the fade, you hear this great trumpet thing, and you think, ‘Why the fuck is he fading it? It’s so wonderful!’ It’s a mark of genius, really. Michael might have made me start thinking that way about songs. It’s something you’d think every writer would know, eventually.”

The aforementioned crowdfunding effort – a very successful PledgeMusic campaign – has helped raised funds allowing Pugwash to record their upcoming album. The crowdfunding concept is “great for bands like us,” Walsh says. He makes an analogy, then observes, “No, that was a shitty analogy. But you can make it sound brilliant in text, okay?” In essence, the point he endeavors to make is that free downloads do hurt the band’s ability to stay afloat financially. “We couldn’t sustain making records with people investing in us any more,” he says. “So we thought long and hard about how to do it. We could play a bunch of gigs and get the money up ourselves. But it would have been ridiculous. What this pledge approach does is reaffirm our love of people. Because all of these fans, some of them might have money and some might not. But they all put their hand in their pocket and gave us something. It’s an incredible thing to see. We got a hundred-odd percent [of our goal] in ten days.”

The crowdfunding model reminds Walsh of how things used to be when he was very young. “It’s almost like a revival of the old fan club idea,” he observes. “Instead of sending ten dollars and getting a membership card, you send ten dollars and get the album and get your name on it. I’d have been all for that when I was a kid. Not all of the new ideas are killing the old ethics of music.”