Third Time’s The Charm: Pugwash Aims for America, Part One 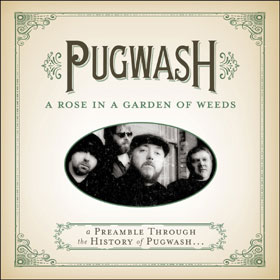 Irish band Pugwash has been around for fifteen years, and during that time, leader and songwriter Thomas Walsh has worked with a long list of people whose names will be familiar to fans of what one might call guitar pop: Andy Partridge, Dave Gregory, Ben Folds, Jason Falkner, Nelson Bragg, Michael Penn, Eric Matthews and many others. But for whatever reason, in all the years they’ve been together, Pugwash has escaped the notice of most American listeners. Walsh believes he knows why this is the case. “We never had a label on the mainland of the U.S.” Thanks to fans who happened to own record labels, Pugwash has had their best music compiled on no less than three separate best-of collections: Australian label Karmic Hit released Earworm in 2003. Ape House, the label run by ex-XTC guitarist/vocalist Andy Partridge, put together the Giddy compilation in 2009. And now, Grammy Award-winning USA-based label Omnivore Recordings has released A Rose in a Garden of Weeds, a seventeen-track survey of Pugwash’s most timeless melodies.

Walsh says that early on, he and his Pugwash bandmates thought, “We could release an album in Ireland or Europe, and then people [all across the globe] would say, ‘Oh, that’s pretty good.’ But no.” That’s not how it worked in the real world.

“We should never have gone into any business together” with Partridge, says Walsh. “Because we’re friends first. And you should never mix [business and friendship] with certain people. We all have our foibles. Andy’s such a lover of what he does; he’s such a passionate person about his music and all aspects of it – his label as well – that he has strong views about everything. He has strong views about milk! So it made itself into a bit of a clash that should have never happened, really.”

But Partridge’s love of Pugwash’s music didn’t pave the way for a proper stateside release of Giddy. “When it came to America,” Walsh recalls, “his deal with the people who were going to bring records to America wasn’t as strong as he thought it was. And it certainly wasn’t as strong as I thought it was. So it didn’t really come out there.” Walsh paints a description – kidding only slightly, one can assume – of boxes upon boxes of Giddy being unloaded on a New York loading dock, waiting for fans to come around and pick them up. And nobody ever did. “It just flopped,” Walsh says.

“It made a tiny bit of a ripple,” he allows. Certainly promotional copies found their way into the hands of some reviewers (this writer included), so some small level of buzz was set alight in the States. “But we knew that we’d only have a chance in the States if we got a label there. And then of course the whole Omnivore thing happened,” Walsh says, positively beaming. “They’ve done it so quickly, and so beautifully. In the last six months, it’s been like, ‘Where has America been all our lives!?’” He notes that he fully understands what it takes to have any chance of breaking into the market in the USA. “You have to embrace the wonderful people in the USA. You have to go over there and play. And we always wanted to do that, but we couldn’t before. It’s incredible how you won’t get any gigs, or any help, when you’re not promoting something. When you’re not on a label.”

Just like The Beatles discovered in early 1964, America is still where it’s happening when it comes to rock and pop. Part of that has to do with the potential that lies within such a massive market. “We’re not interested in playing in Ireland,” Walsh says. “We love our Irish fans, of course. But they can go to someone else’s gig for free for awhile,” he laughs. “It costs us a lot of money to play a gig in Ireland, and everyone [there] goes, ‘Ah, can you get us in for free? Stick my name on the door. And I’ve got nine people comin’ with me!’ I’ll tell you something: You can’t see the fuckin’ door for all the names stuck on ’em. So we’re happy to get away from that for awhile. We can’t wait to get back to America in February and March.”