In 2015, nearly every concertgoer carries a smart phone with a built-in camera, so snapshots of the onstage performers aren’t exactly a rare commodity. But there’s a long and proud tradition of legitimate concert photography, and it’s no hyperbole to call it an art form. Some of the most iconic images in music have come from the lenses of such giants as Elaine Mayes (her Monterey Pop concert shots of Pete Townshend and Jimi Hendrix are classics), Mick Rock, Jim Marshall, Anton Corbijn and Jenny Lens. 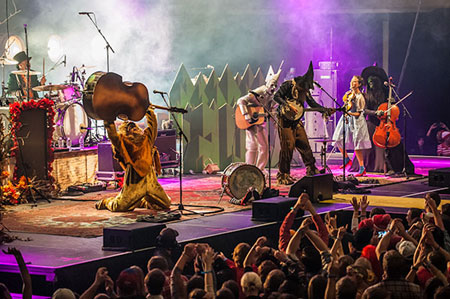 Asheville has its own modern-day exponents of concert photography. You’ve likely seen these characters at any number of local venues; they’re the ones who not only understand the rules (no flash photography, “pit photography” allowed for the first three songs only), but have a keen and discerning eye. Concert photography is about so much more than snapping the shutter at the right moment; it’s about synthesizing what’s special about a performer – someone who deals in sound and movement – into a still and silent visual image that captures the essence of that performer.

Three of the finest Asheville-based concert photographers have created an exhibition of their best work, on display now through April 15 at The Green Sage Café (Westgate). “Front Row Focus” presents arresting images from the cameras of Nick King, David Simchock, and Frank Zipperer. Though all three travel on assignments, “Front Row Focus” is drawn from the best images documenting local performances. Curated by Paul Rollins, the exhibit features dozens of color and black-and-white photos.

The works of the three photographers are displayed throughout the Green Sage’s airy, open space; while the room is well-lit after dark, the photos are seen to their best effect surrounded by natural light. Zipperer – a photographer whose tastes run toward jazz – presents his concert photos primarily in black-and-white format; that format allows the photographer to make visual statements about his subjects through controlled use of contrast. The shots are often up close and personal, and always lead themselves to contemplation and close study.

Much of Simchock’s work displayed at “Front Row Focus” features rich, deeply saturated colors that lend the images an almost three-dimensional quality. The hyper-realism and stunningly sharp focus creates a you-are-there ambience. Nearly all of Simchock’s photos document performances in Asheville; the few exceptions – photos taken in New Orleans and Philadelphia, for example — are so breathtaking and remarkable that their inclusion makes sense.

King’s work is superb in its capturing of those just-right onstage moments; though dealing with subjects who are constantly on the move, the photographer’s documenting of a split-second slice of the performance somehow captures and conveys all of the movement. And it does so with astounding clarity. Though he, too, sometimes works in close-up, King’s wide-angle lens brilliantly and effectively captures the stage as a whole.

All of the photos on display at “Front Row Focus” are available for purchase, but it costs nothing to view them at the exhibit. The photography installation is open for viewing during Green Sage’s normal operating hours (daily 8:00am – 7:00pm).