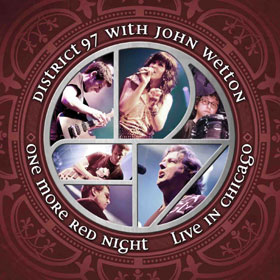 With exceedingly few exceptions, progressive rock is a man’s game. There’s certainly no law against women singing or playing in the style – Julie Slick, for example, is one of the best bassists around these days, irrespective of genre and gender – but the truth is that the progressive rock scene is one in which males vastly outnumber females. (Put another way, straight single guys shouldn’t go to a prog festival hoping to hook up with a nice chick; the competition is likely to be fierce.)

As is so often the case, it’s the exception that proves the rule. District 97 is prog rock’s exception. Fronted by the immeasurably capable Leslie Hunt (yeah, yeah: a 2007 American Idol semi-finalist; hold that against her and it’s your loss), their 2010 debut album Hybrid Child is a dazzling display of prog rock chops wedded to engaging songs and arrangements.

The world being what it is, the group’s success to date is thanks in no small part to having an attractive vocalist out front. But their skill and musical appeal is beyond question, so if a pretty woman who happens to have an excellent voice helps get people to take notice of the band, small or no harm done. District 97 have built a solid reputation on the strength of their studio efforts and their live performances, and they’ve become a fixture at many of North America’s prog festivals. (Compared to other music genres, the progressive rock world is a relatively small community, especially in the USA.)

Not long ago, the band came to the attention of John Wetton, the bassist/vocalist best known from his long tenure as the lead singer in Asia. Among longtime admirers of his work, however, its Wetton’s work with King Crimson that tops his impressive résumé. Wetton handled bass and lead vocals through one of King Crimson’s most creatively fertile periods, appearing on Larks Tongues in Aspic (1973), Starless and Bible Black, the mighty Red (both 1974), and 1975’s live USA album.

Because King Crimson’s subsequent lineups were always possessing of a forward-looking bent, the opportunities to hear songs from Red played at all (much less in arrangements faithful to their studio versions) were all but nonexistent. The closest anything came was the group billing itself as the 21st Century Schizoid Band, populated largely by ex-Crimson members and fronted by Jakko Jakszyk (himself now in the current incarnation of King Crimson, “Mk VIII” as it is commonly known). But the 21CSB was too expensive a proposition to keep alive, and ceased activities after an all-too-brief run (2002-2004).

Luckily for fans of Wetton-era King Crimson (“Mk III” if you’re keeping score), the bassist-vocalist looks fondly upon his work from that period. And who better – who better, I ask – to back him up on a set of classic Crim than this crack midwestern prog band?

None better, as it happens. A brief tour took place in 2013, bringing the music of King Crimson Mk III to modern-day audiences through the musical vehicle of District 97 with John Wetton. And the cleverly-titled One More Red Night (you’ll get it if you’re a fan of Red) documents a single performance from the tour.

The small performance venue Reggie’s Music Joint in the band’s hometown of Chicago hosted the October 2013 set. From the sound of the live recording, one can assume that D97 came out and did a set of their own music first. And then at the show’s midpoint, they were joined by John Wetton at the mic (he doesn’t play bass on this set; that daunting role is ably handled by District 97’s Patrick Mulcahy). The group then proceeds to tear through largely faithful versions of songs from the four Crim albums that featured Wetton.

John Wetton is in fine voice throughout, hitting the notes with power, subtlety and just the right amounts of emotion (when called for). He’s ably assisted by Hunt, who sometimes trades vocal lines with him, and other times provides live accompaniment in places where Wetton had originally overdubbed his voice (she does both on “The Great Deceiver” and several others).

The band is stunning throughout. Playing any King Crimson material requires a level of finesse and precision unachievable by the garden-variety musician, but the members of D97 are clearly up to the task. And while they’re all on fire on this set, guitarist Jim Tashjian deserves special notice for his precise recreation of mid 70s Robert Frippery. Jonathan Schang‘s drum work compares favorably (and sounds a helluva lot like) drum master Bill Bruford, as well. If there’s a criticism of this set – and this really isn’t one – ace keyboardist Rob Clearfield is somewhat underutilized in this show. That’s due, of course, to the relatively minimal amount of keyboards called for on these numbers.

The band stomps through “21st Century Schizoid Man,” a song that dates from King Crimson’s earliest days when Greg Lake was their singer. But the song figured into Mk III sets, so its inclusion makes sense here. And it also gives Clearfield an opportunity to display his abilities within the context of the King Crimson material, making it even more welcome. A truncated arrangement of the malevolent and majestic “Starless” provides another opportunity for dark, Mellotron-flavored keyboard lines; it’s also a showcase for Wetton’s vocal. Serving up a severely abbreviated summary of the dissonant second half of “Starless,” the band segues into “Easy Money,” where Wetton and Hunt engage in some wordless vocal harmony.

With Bruford retired and Fripp otherwise engaged, One More Red Night is as close as modern-day listeners are ever going to get to a Red-era King Crimson reunion. Put this CD on, close your eyes, and you’ve pretty much got one.

Note: I haven’t a clue why the album is going for upwards of US$56 on Amazon (see box). But it’s available from the D97 web site at a vastly more reasonable price.