Late in 2014, I was contacted by the music reissue label Real Gone Music. Label head Gordon Anderson asked me if I’d be interested in writing the liner notes for an upcoming release. I had already done a number of projects for RGM, including a Brotherhood CD reissue, a Cannonball Adderley title, and a Rick Wakeman project. But with regard to this potential assignment, I wasn’t at all familiar with the name Bobby Lance, the artist whose pair of early 1970s albums were released on Atlantic and Cotillion (an associated subsidiary label). Both LPs went out of print forty-plus years ago. But a quick visit to YouTube convinced me that his music – very much in the Muscle Shoals/Stax blue-eyed soul mold – was right up my alley.

The thing was, there was very little in the way of hard information on Lance or his albums. Gordon gave me a bit of decade-old info on Lance’s last-known-location, and pointed me to another blogger’s brief essay (from a few years ago) in which the writer asserts a possible Duane Allman connection.

Even though I had little to go on – and a deadline – I was hooked.

Fast-forward to a few weeks later; by that time I had found and spoken to a number of people connected to Lance, a highly-regarded musician who had played on the album, and Bob Lance himself. You really need to hear the music, but the back story is nearly as important. Here it is, in three parts. – bk

The musical story of Bobby Lance starts years before The Beatles scored their first hit in America, and reaches its peak in the early 1970s with the release of two solo albums for a major record label. Lance’s career arc includes close associations with some of music’s most legendary names, though Lance never achieved the high profile that they enjoyed. 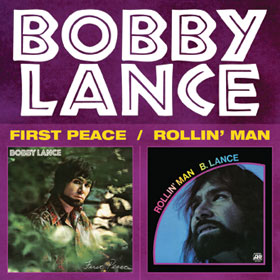 Orphaned at a young age, Brooklyn-born Lance was for many years effectively raised by his sister Fran, seventeen years his elder. Fran married Norm Robins (née Rabinowitz) in the late 1950s, and Norm took a great interest in the musical pursuits of his wife and brother-in-law. In fact it was Norm Robins who picked up the tab for a very young Bobby Lance to cut a single for Square Records, a local label. The pre-teen Lance cut a song of his own composition, “Baby I’m Gone.” Very much in the Bobby Vee teen idol mode, the song reflected the popular style of that time, but very few copies were pressed. Robins, lacking connections in the music business, wasn’t able to get the song onto radio or into widespread distribution. But the experience did whet the appetites of everyone involved to keep trying.

Bobby and Fran had already begun writing songs together: though a classically trained pianist, Fran stuck to writing lyrics, while brother Bobby composed the music. Though both were white Jews from Brooklyn, their songs’ lyrics reflected common, universal themes, and their music displayed their deep interest in African-American rhythm and blues.

Back around 1957, teenager and fellow Brooklynite Richard Perry had formed a vocal group with two of his friends; they called themselves The Escorts. By 1962 and the time of their third single, they had replaced their lead vocalist with female singer Goldie Zelkowitz; that lineup released “I Can’t Be Free” on Coral. The song was written by the now very active team of Francine “Fran” Robins (often misspelled on credits as Robbins) and Bobby. When Zelkowitz (later known as Genya Ravan) left The Escorts in early 1963, Bobby came in as lead vocalist; he sang on their last two sides.

Elsewhere in 1963, a Brooklyn doo-wop group called The Monorays released the red vinyl 45rpm single, “Face in the Crowd” b/w “Step Right Up” on Pittsburgh’s tiny Astra label. Both sides came from the pen of the Lance/Robins team. The siblings remained busy, writing tunes for Maxine Brown, The Sidekicks, The Ravenettes, and Zelkowitz’s new group, Goldie and the Gingerbreads.

A 1965 Lance/Robins composition (with Richard Perry, now in the dual role of co-composer and session producer) performed by The Young Generation yielded a genre minor-classic in “The Hideaway.” The Young Generation was notable for its lineup: three twelve-year-old girls, one of whom, Janis Siegel, would go onto fame as a member of Manhattan Transfer. (“The Hideaway” is included on Real Gone Music’s 2011 compilation, The Red Bird Girls). Around that time – with both doo-wop and girl-group styles well past their sell-by date – Bobby Lance and Fran Robins began writing songs that displayed a more R&B-inflected style.

By 1967, Lance and Robins connected with gospel-turned-R&B singer Thelma Jones; she would cut a number of singles for Barry Records, the small label run by colorful and notorious music industry figure Hy Weiss (and named after Weiss’ son). The b-side of her 1967 single, “Oh, Oh, Here Comes the Heartbreak” b/w “Gotta Find a Way” was arranged by Lance. Though the single didn’t do much chartwise, it established a working relationship between Jones and the young arranger/composer.