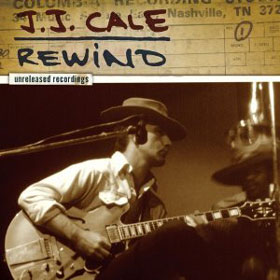 To the music-buying public at large, J.J. Cale is little more than a footnote. Some recognize his name and acknowledge he’s the guy who wrote two of Eric Clapton‘s biggest hits, “After Midnight” and “Cocaine.” Some know a bit more, and note that he also composed “Call Me the Breeze” (a popular Lynyrd Skynyrd tune). Some confuse him with ex-Velvet Underground viola player John Cale.

Fewer still are familiar with his own word as a recording artist. Cale released fifteen albums between the early 1970s and the end of the new century’s first decade (he passed away in 2013). A good half-dozen compilations have sought to distill his work down to single-album proportions, and for the listener new to the man’s work, any of those is a fine place to start.

For those interested in diving further into Cale’s music, a 2007 album titled Rewind: Unreleased Recordings provides a surprisingly complete overview of Cale’s talents. Newly reissued on vinyl, Rewind doesn’t sound at all like a collection of leftovers, discards and half-baked efforts. It’s a fully realized album, and it’s all the more remarkable this it is so, seeing as the fourteen cuts are drawn from all phases of his career.

To those less familiar with his material, Cale’s style as showcased on Rewind will sound remarkably similar to Clapton’s laid-back, post-Derek and the Dominos musical persona. The mot charitable view is that when British guitarist Clapton got back to his roots, he just happened to end up sounding like Oklahoma City-born guitarist. No matter: Cale’s sound is heavily influenced with a Southern gospel/roots sensibility, a sly, quiet shuffle style that imbues all of his work with a smoky, smoldering aura.

As showcased on Rewind, Cale is a most understated character. Even when he rips out a wah-wah laden solo (as on “Since You Said Goodbye”), his musical fire quietly glows more than it licks at the sky. His countrified musical sensibility never asserts itself; his approach seems to be more along the lines of, “Her’s what I’m doing. Stay and listen if you like.” That approach may help for account for the man’s relatively low profile. He seemed more content to stay and play in the shadows, away from the limelight.

While many of the first several cuts on the disc are Cale’s reinterpretations of the work of others (Randy Newman, Clapton, and Leon Russell: like-minded artists all), the second half (and in this case, second side) of Rewind is all Cale originals.

The closest that Cale comes to high energy on Rewind is “Bluebird,” but its uptempo vibe is more bluegrass-leaning than anything else. Pedal steel guitar is the highlight of My Baby and Me,” the closest Cale gets to old-style country on this collection. “Lawdy Mama” feels a bit like a rewrite that combines “After Midnight” and “Call Me the Breeze.” Though it’s a fine tune, its tail-chasing nature makes it less fulfilling listen (and perhaps explains why it went unrevealed for years).

Unfortunately, the 2015 vinyl reissue of Rewind doesn’t include any discographical information, so we don’t know the recording dates or years for these cuts, and the studio personnel can only be guessed at. But none of that detracts from enjoying the listening experience that is Rewind: Unreleased Recordings. Those new to Cale will get a fine introduction to his work, and further investigation will yield richer rewards. And Cale fans will want it for completeness’ sake. Either way, it’s a fine record, made all the more special as a warm and wonderful sounding180-gram vinyl edition.