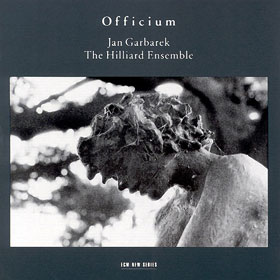 This double-album – originally released in 1994 – is a transcendent, compelling work that combines jazz with choral/classical music. Featuring vocals sung in Latin by The Hilliard Ensemble (countertenor David James, tenor Rogers Covey-Crump, tenor John Potter, and baritone Gordon Jones), Officium is nearly an all-vocal album. But the haunting saxophone work of Jan Garbarek (on soprano and tenor saxes) adds a dimension to these performances that takes them well beyond the realm of devotional choral performances.

The performance was recorded in an Austrian monastery, and the result certainly sounds like it. It’s unlikely that the ambience captured by producer (and ECM head) Manfred Eichler could have been captured in any conventional recording studio, no matter how high quality. The echo-against-stone aural texture gives Garbarek’s tenor a yawning quality that sometimes makes it difficult to distinguish from a cello. In fact, the Norwegian saxophonist’s instrument effectively becomes a fifth voice, blending as he does into the vocal milieu of the Ensemble.

This initial collaboration between Garbarek and the vocal quartet was so successful that they mounted a series of tours, and followed up the release of Officium with further recorded cooperative efforts. Officium may well have been the inspiration for the release of Chant, the album of Gregorian chants featuring the Benedictine Monks of Santo Domingo de Silos, also released in 1994. There’s little doubt that Officium – the more modern and sophisticated work of the two – helped renew interest in the musical form of the Middle Ages.

In the expansive booklet that accompanies this 2LP reissue, Eichler comments on the genesis of the session, noting that the idea came to him initially as potential accompaniment to a movie he had planned to make in Iceland. The music of 16th century composer Christóbal de Morales (which figures largely in Officium) so moved Eichler, though, that in the end, as he writes in the booklet, “No longer able to reconcile the intensity of the sounds with the figure of Geiser [the film’s central character], I later decided on other music [for the film]. The vision remained. And now this recording.” Potter adds, “What is this music? We don’t have a name for it.”

The libretto includes all of the Latin lyrics to Officium‘s fifteen tracks, but no English translation is provided. That notwithstanding, the power and the majesty of the performances transcends words and, perhaps, meaning.