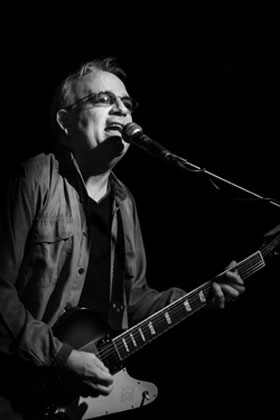 What I didn’t realize at the time is that the setback of rotator cuff surgery and recovery wouldn’t keep Jamie Hoover from creating new music and new recordings. “I thought, ‘Well, I’m not gonna be able able to play guitar for while,’” Hoover recalls. “So I got interested in the idea of trying to sing the parts.” Thus began the process of a vocals-only project. Initially, Hoover had in mind another Jamie and Steve EP. “I talked with Steve [Stoeckel] about it, and he wasn’t really into doing a whole record like that. And you’ve got to really be into something like this to be able to do it.” So Hoover began work on what would become Jamie Two Ever. (In the end, only a portion of the disc is vocal-only tracks.)

“I wanted to make a point of not using drum machines on it,” he says. “I played buckets and pots and pans instead. So it has that sound to it.” Despite the inclusion of a track titled “Honest Work,” Jamie Two Ever is very much unlike Todd Rundgren‘s A Cappella, a 1985 album that – on paper, at least – seems like pretty much the same sort of musical excursion as the original idea for Jamie Two Ever. “I’m a big Todd fan,” Hoover says. “I make no bones about that. And I’m very familiar with that record. But I didn’t want to do what he did, which was basically sampling [vocals] on an Emulator.” Rather than treating his vocals through a sampler, on Jamie Two Ever‘s vocal tracks, it’s mostly Hoover’s natural voice.

Despite the grab-bag approach to songs on the album – some vocals-only, some with instruments, most solo, one with Steve Stoeckel guesting – Jamie Two Ever holds together as a cohesive whole, and provides a good sampler of the Jamie Hoover signature sound. The guiding principle when making the recordings was simple, Hoover laughs. “I just wanted to please myself. If I get it to where I’m happy with it, then the narcissism comes out, and I’m ready to say, ‘Hey! Look at this!’” And since the disc wasn’t made with the idea of creating an album, it has more of a collection-of-singles feel. “I always think in terms of, what sounds like a single? And then it’s a matter of sequencing those songs so they flow together.”

The digital and physical (CD) versions of Jamie Hoover’s new album differ significantly: the CD includes nearly twice as many tracks (fifteen total). “The difference is simply financial,” Hoover states. In days gone by, a record label would handle the distribution of composer royalties for songs “covered” on an artist’s album; today, the onus sits squarely on the recording artist himself. As far as the songwriters getting paid, Hoover has no qualms with that. “It’s the right thing to do, of course.” But the current arrangement exerts significant front-end financial pressures on the recording artists. “I did that for my [2004] Jamie Hoo-Ever album, and it cost me an additional $800. That – for an individual doing an independent release – is really expensive.” So the digital version includes only Hoover originals, leaving off his vocals-only reading of The Beatles‘ “Misery” and a truly weird all-minor-chords reinvention of Rubber Soul‘s “I’m Looking Through You.” 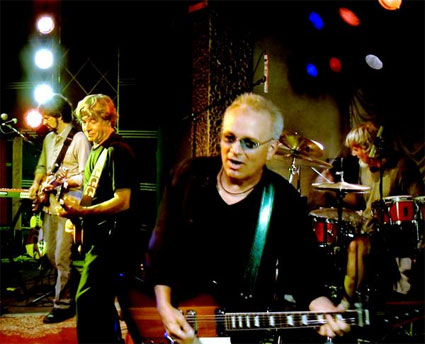 “I decided to make it a kind of marketing thing: only the 300 physical copies would include those other songs. If you want those, you have to buy the CD.” He laughs and adds, “Shameless promotion.”

Meanwhile, Hoover is still on the mend following his recent surgeries. Another Jamie and Steve EP is in the works. “We [The Spongetones] did some unannounced gigs not long ago. And I’m still producing, working on a lot of projects. And I can play. But my arms still hurt like hell. I can’t do push-ups or anything like that, but I can play. I’ll play until I’m tired.” He chuckles, “I think I could still do a four-hour gig, but at the end I’d feel like I’d been thrown off a truck.”