Album Review: Son of Kraut: The Next Generation of Krautrock 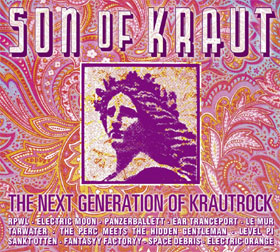 Though it might seem otherwise to the casual observer, the term krautrock is neither pejorative nor disparaging. In its classic sense, the label refers to improvisationally-based rock with spare musical foundation. As the word suggests (in an undeniably gauche manner), the form originated in Germany.

When one thinks of krautrock, bands that often come to mind are Can, Tangerine Dream, and Kraftwerk (the latter’s hypnotic, epic-length “Autobahn” is an exemplar of the genre).

The style reached its apex in the 1970s; today when one sees or hears the term, it’s nearly always in the context of music from the past. But – depending on how the term is understood – the krautrock label can be applied to modern-day music. Especially if a strictly literal interpretation is used (in other words, German rock), all manner of musical artists fit under the umbrella.

Certainly garage/psych revival bands like The Roaring 420s don’t fit into this discussion. Nor, of course, do some fantastic American expat artists who have made Berlin their base of operations (Anton Barbeau, The Fuzztones, and Brian Jonestown Massacre‘s Anton Newcombe, to name but three). But a number of interesting artists do fit the bill, and while they’re made barely a ripple on the musical consciousness of American listeners, collectively they’ve created a body of work that bears further investigation.

But how to do so? One could start by reading Krautrocksampler, the 1995 book by the genre’s most prominent champion, Julian Cope. But there are two problems with that idea: first off, the book is now twenty years old, so it can’t address, y’know, current acts. More problematic is the going rate for the long out-of-print title: currently upwards of $230 for a used copy on Amazon.

With that option off the table (PDF scans of Cope’s book do circulate online, and as of summer 2014 there’s “talk” of reissuing it), we turn instead to a compilation CD. The German label Sireena released a fine overview of “classic” krautrock not long ago: Live Kraut: Live Rock Explosions from the Heyday of Krautrock! focused on what one might call the first wave of the genre. Band names like Grobschnitt, Guru Guru and Jane will be wholly unfamiliar to American audiences, but for the most part, their music isn’t so out-there as to be unintelligible to American ears. (The same can’t be said for some of krautrock’s more adventurous acts: Kraan and Birth Control are pretty freaky; I have a few vinyl albums by each, and hope to find more later this year when I visit Germany.)

Happily, Sireena has filled this niche by releasing another compilation, Son of Kraut: The Next Generation of Krautrock (never let it be said that the Germans don’t spell it right out for you in their titles). Once again, here is a disc (with twelve tracks) filled with artists who are virtually unknown in the USA. RPWL might be familiar to those who regularly visit this blog; I’ve both reviewed their music and interviewed the group’s Yogi Lang. RPWL are featured on this set with “World Through My Eyes,” the title track off their 2005 album. It’s fine enough, but doesn’t show the group at their best, and isn’t truly representative of the band’s oft-displayed appealing characteristics.

The other eleven tracks are a varied lot. Some do explicitly build on the motorik textures of older krautrock: Ear Tranceport‘s “Lock In (Namby Pamby)” has that chugging, mechanical beat applied to a melody that’s largely driven by acoustic guitar. And the one-chord “Stranded” from Space Debris will delight fans of Pink Floyd‘s Ummagumma, as it meanders purposefully though similar sonic territory over the course of its nearly ten minutes.

Sankt Otten‘s vaguely sinister instrumental “Nach Dir Die Sinnseflut” will remind listeners of Tangerine Dream at their soundtrackiest. Electric Moon deliver a deeply textured vibe on “Madrigal Meridian,” sounding like a Teutonic (and at times, more tuneful) Nine Inch Nails. One man band Level Pi engages in some evocative krautrock that features some straightforward rock guitar riffage; it too wouldn’t be out of place in a film soundtrack.

The Perc Meets the Hidden Gentleman is a wholly different affair. Seemingly taking its sonic inspiration from former Berlin resident David Bowie, “The Moon of Both Sides” is perhaps the track on Son of Kraut most likely to connect with the casual listener. The brooding, dreamy “I Can’t Walk My Floor” by Tarwater is cut from similar cloth as the music of Austin’s Black Angels.

“Psysomsyl” from Electric Orange features seven minutes’ workout on a single chord; the track grows in intensity, not unlike some of Glenn Branca‘s work, or classic-period Godspeed You! Black Emperor. Things take a decidedly more tuneful direction with “On Stranger Tides” from Fantasyy Factoryy. The hand drumming and repetitve electric guitar riff suggest a campfire version of Pink Floyd, as does the track’s Roger Waters-like vocal.

The intriguing instrumental “”O.M.E.N.” from Le Mur initially heads back into the psych revival region, but some treated saxophone riffage suggests what Black Sabbath might sound like with some added brass instrumentation.

Son of Kraut wraps up with some prog-metal, a genre heretofore unexplored on the set. Both the band name (Panzerballet) and the song title (“Vulgar Display of Sauerkraut”) provide hints as to where this Teutonic Metallica are headed. Some tenor sax will throw metalheads for a loop, but otherwise, the genre’s hallmarks – blindingly fast guitar licks, thundering rhythm, semitones – are all here. Overall, it’s a bit jarring in the context of Son of Kraut‘s mostly moody atmosphere, but it gets better as it goes along.

The poster-styled liner notes (in both German and a chuckle-eliciting English translation) provide enough information to help those wishing to investigate the bands further. For listeners interested in a sampler that is both adventurous and not a million musical miles away from their comfort zone, Son of Kraut is recommended. It’s a safe bet that you’ll find something you enjoy in this album filled with unfamiliar names.

N.B.: There’s an additional title in this series, a disc called Jazzkraut: Teutonal Jazz Rock Excursions. It features the aforementioned Kraan and Volker Kriegel; I will do my best to score a copy and review it here when I can.