Album Review: Sid Griffin — The Trick is to Breathe 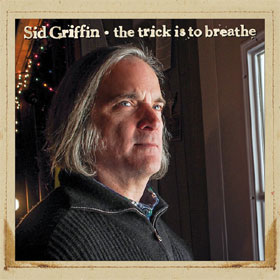 In the immediate wake of the excesses brought forth by psychedelia, popular (rock) music took a decided turn toward the simpler, more pastoral. Mere months after Cream were hitting the charts with “Sunshine of Your Love” and Jimi Hendrix was endeavoring to stand next to our fire, groups like The Band were finding success with a much more toned-down, sepia-tinted sort of music. That style owed more to acoustic instruments, even when they were employed in rock fashion.

While the charts splintered into genres as the 70s wore on, this simpler (dare I say softer) approach was taken to another level – a higher or lower one, depending on one’s need for rock in their musical diet – with the rise of the sensitive singer/songwriter. For all his merits, James Taylor exemplifies this turn away from the visceral in popular music, at least for a significant portion of the listening public.

But before the singer/songwriters took hold, and in connection with the pastoral approach, some very interesting (and creatively fertile) things were happening in popular music. The Byrds, Poco, Moby Grape and a few others had been investigating the sweet spot where rock and more acoustic-based forms met, and the results were sometimes exemplary. But the hybrid style didn’t gain a strong foothold in the pop marketplace.

Not right away, anyhow. But more than a decade later, concurrent with the rise of what is sometimes called the paisley underground movement, a number of musical artists took another look at combining rock and folk (and/or country) styles. There wasn’t really a succinct name for the hybrid then – today we might call it proto-Americana – but the music from artists such as The Blasters and Lone Justice had as its foundation that commingling of musical genres.

And without a doubt the giant among these was The Long Ryders. Led by guitarist (and player of other stringed instruments) Sid Griffin, The Long Ryders could be pointed to by decided fans of hard-rocking music of the 80s as the one “twangy” band that they really, really dug. The group folded near the end of the decade (happily they reunite on occasion), and the members went their various ways. Griffin continued to cultivate his career as a writer, a curator of music, and a musician with solo albums. He also started a group called The Coal Porters; almost wholly rooted in Americana-type instrumentation, they also rocked.

Griffin’s latest album, The Trick is to Breathe, combines the best elements of the hybrid rock-Americana style, and it’s also a lyrics-focused album that fans of the singer/songwriter genre will find very rewarding. It’s most certainly not a rock record – there’s not a note of electric instrumentation to be found – but it has an undeniable (if hard to pin down) rock sensibility about it. Griffin’s vocals are mixed right out front, allowing listeners to follow along in his story-songs without straining their ears. On the gentle “Ode to Bobbie Gentry,” Griffin makes the observation that “no one ever comes to no good in the show-biz world,” but the fact that he’s making albums like this strongly suggests otherwise. “Blue Yodel No. 12 & 35” is a bluegrass romp, but one that’s fun and free of artifice; even an avowed non-grasser such as this writer can’t be helped but drawn in by the lighthearted lyric set against a familiar melodic structure. Maybe it’s purely coincidental (and maybe not), but “Circle Bar” is vaguely reminiscent of Tom Rush‘s reading of Joni Mitchell‘s similarly-titled “The Circle Game.”

Griffin’s gentle mandolin plucking is at the center of “Between the General and the Grave,” and some melancholy fiddle work helps create a fragile ambience for this tale of war. Perhaps the most interesting track on The Trick is to Breathe, “Elvis Presley Calls His Mother After The Ed Sullivan Show” is also the track that sounds the most like The Long Ryders. This fanciful rethink of an imagined conversation between the King and Gladys Presley is warm and sentimental, painting a portrait of Elvis when he was young and relatively innocent (“I’ll still be your son when all is done”). Griffin’s Elvis conveys some hard-earned wisdom to his mother: “Mama, never party after the show.” Musically, it’s a cousin to “Harriet Tubman’s Gonna Carry Me Home,” from The Long Ryders’ 1987 LP Two Fisted Tales. Whatever its provenance, it’s a delight.

“Everywhere” is the album’s longest track, and it waits until more than halfway through to change up the arrangement. But it’s worth the wait, with some wonderful close harmony vocal work. A reinvention of the sixties folk-rock classic “Get Together” is nearly unrecognizable, but in Griffin’s capable bluegrass-centric hands, the old adage “a good song is a good song” is proved yet again. With its fade-in and fade-out, the brief, clanging instrumental “Front Porch Fandango” sounds for all the world like a spontaneous jam that happened to get caught on tape; more of it would be even better.

“Punk Rock Club” is a bizarre – yet enthusiastically welcomed – left turn on The Trick is to Breathe. On this spoken-word track, Griffin recites a collection of comments, perhaps from selected audience members. In their most deadpan voices, Griffin and his friends give us lines such as, “Why is the singer so angry?” and “Why does the drummer hit so hard?” This piss-take of rock’s poseur tendencies is very knowing, and very, very funny. The crosstalk near the track’s end is reminiscent of some of the experiments Robert Fripp did with The Roches on his The League of Gentlemen album.

The gentle guitar picking on “Who’s Got a Broken Heart” finds Griffin with both feet in singer/songwriter territory. He reaches deep and pulls out a more nuanced vocal than is typical, and subtle cello sawing adds the perfect accompaniment. The three-quarter time story-song “We’ve Run Out of Road” feels like the kind of song Willie Nelson comes up with at his best. Griffin’s careful arrangement touches help the song strike the perfect balance between slick and down-home.

Griffin wraps up the stellar album with “I’ll Forget You Very Well,” a high-speed bluegrass tune that riffs on tried-and-true phrases and lyrical snippets that overtly reference Bob Dylan and The Beatles (“No Direction Home,” “I Saw Her Standing There,”) all put to clever, smile-eliciting use.

The Trick is to Breathe is a start-to-finish triumph.