Though it’s in many ways an informal affair, Warren Haynes Presents Christmas Jam has been growing in a deliberate fashion. Thanks both to concertgoer demand and the long line of musicians wishing to be involved in this fundraiser event, the festival – now in its 26th year – expanded to two nights a few years back, and has added extra events downtown.

The Christmas Jam By Day presents musical artists – many of whom are local and/or regional sensations – in smaller, more intimate settings. The acoustic jam, hosted by Drivin’N’Cryin‘s Kevn Kinney – has been part of the festival since the beginning. Its newer, more plugged-in counterpart takes place just down the street at Asheville Music Hall and its downstairs annex, The One Stop. 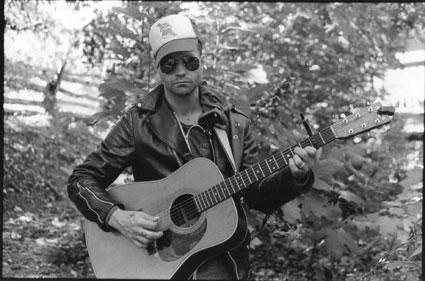 Guitarist-vocalist Aaron “Woody” Wood has been a fixture of the Jam By Day for the last several years; usually the organizers contact Wood and ask him to participate. “This year, I kinda reached out to Kevn Kinney through Facebook,” Wood says. “I asked if I could play again this year. I never heard back from him. Next thing I know, it’s in the paper!” Wood is as well-known nationally as he is in his longtime hometown of Asheville; as a member of The Blue Rags, Custard Pie, Sufi Brothers, Hollywood Red and a solo artist, Wood’s brand of music incorporates Piedmont blues, bluegrass, soul, and good old fashioned rock’n’roll.

For this year’s Jam By Day event, Wood will appear at both Asheville Music Hall and Jack of the Wood. For the latter, he says, “I’ll be playing some newer stuff that I’ve written. The crowd there…you can hear a pin drop.”

Wood’s Asheville Music Hall set is with his pick-up band of musical brothers, Trouble. The group is an ongoing collective of well-known and in-demand local/regional players who convene for the occasional gig. Trouble also features Jay Sanders on bass, keyboardist Ryan Burns, Shane Pruitt on guitar, and drummer Frank Bloom. “We go together like red beans and rice,” Wood says. Trouble builds spontaneous jams out of well-known songs. “The best way to hear songs that I really, really love,” Wood says, “is to play ’em.” He likens each song to “a ‘face.’ Then we start playing, and that’s how we put ‘eyebrows’ on it.”

Trouble has been together in one form or another for as long as Wood has been playing the Jam By Day. “I think what we do is really in line with what happens on Saturday night, at the main Jam,” Wood says. “Musicians who love to play get together with people they really love to play with.” That informal approach encourages players to just hang out and do what comes naturally, with the added features of a huge crowd of fans in attendance, and fund raising for a good cause. For the last several editions of the festival, proceeds have benefited Habitat for Humanity. The whole event “has a real family type of feel,” says Wood.

VIP pass holders get admittance to both Jam By Day events at no additional charge.

Wood explains his perspective on the jam aesthetic: “You can get a bunch of musicians together – people who have never played together before, and who might not play together again – and play songs they all know: ‘What key would you like to do this in? A major? Okay.’” And in that sense, Wood contends that all of it – no matter what style of music each player comes from – is really folk music. “Because all the folks know that shit, y’know what I mean?”

This feature originally appeared in print in Mountain Xpress.