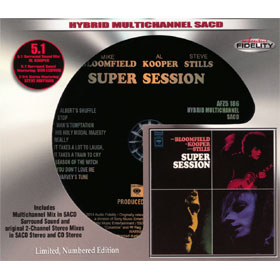 In 1968, the concept of a “supergroup” was still fresh; Lillian Roxon even wrote about it – and its possibilities – in her Rock Encyclopedia. Al Kooper devised what became Super Session as a collaboration between him and guitarist Mike Bloomfield, late of Paul Butterfield Blues Band and Electric Flag. When the notoriously unreliable Bloomfield flaked halfway through the project, Kooper brought in Steve Stills to finish the album. Tasty (and generally tasteful) playing is all over the nine-track record. This release includes the long-delayed 5.1 mix version; Kooper’s liner notes tell the story. A sixties artifact everyone should hear.