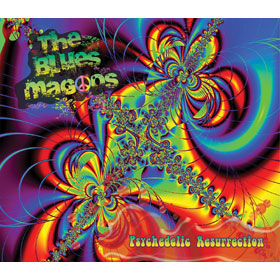 Those early Blues Magoos albums were products of their time; the studio tracks have a distinctive mid-sixties vibe to them. The songs on the group’s new Psychedelic Resurrection album maintain some of that vibe, despite nearly everything having changed about recording music in the years between Electric Comic Book and 2014. Peppy Castro says that “it’s probably easier” to capture the band’s intended sounds now than in the old days. “Because, for example, in the old days, editing was a nightmare!” He laughs. “You had to get the razor blade out. But I love challenges – I love solving problems – so for me, the goal has always been ‘How close can I get to the warmth of analog?’ I’m one of those guys who, as the technology was advancing, didn’t want to be left behind the curve. So in embracing digital technology, I bring with it my wealth of history, my experience of being in the business for fifty years. It’s a fun journey.”

The band’s first two albums were very successful, and both Psychedelic Lollipop and Electric Comic Book (both 1967) are exemplars of the psychedelic rock/pop style. As far as the production techniques employed on those records, “that was not so much our call,” Castro says. “We were involved in the music. We found our niche and decided, ‘Okay, this is the direction for the band.’ We were so inside the music; constantly writing, working like gears in a machine. As far as us being concerned with things like ‘panning,’ we didn’t get into that stuff so much on the first two albums. It was all very new to us. We went in, we tracked the songs, we overdubbed the vocals, and that was it.” 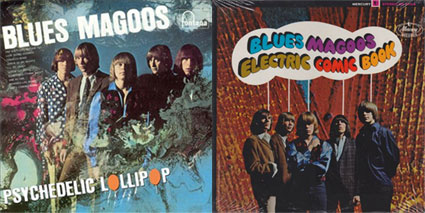 At the time of its release, many acts whose songs appeared on Lenny Kaye‘s 1972 2LP compilation, Nuggets, had no idea that their tunes were on that record, or that the record even existed. It certainly had a role in instigating the psychedelic rock revivals of the 1980s and beyond. The Blues Magoos’ “Tobacco Road” is right there on Side Two. “Somebody had told me about it,” Castro recalls. “But I didn’t know Lenny then. I always thought it was a nice thing, and I didn’t pay it any mind. Now I look back on it, knowing Lenny, and I see just how influential the record was. With the perspective, I see it, but at the time, it was just, ‘Oh, that’s good.’ I blew it off; I thought of it as, ‘We’re in the 99¢ bin now,’ like it was a sort of K-Tel thing.”

Castro reflects upon the culture that brought forth the music of bands like the Blues Magoos. “Between the [Vietnam] war, and flower power, and half of the United States getting stoned and dropping out, the music was so creative. Every band was entirely different! It was just an amazing explosion of creativity.” During that time, The Blues Magoos were successful enough to be asked to appear on several TV shows of the era; the “Pipe Dream” clip from The Smothers Brothers Comedy Hour is a classic. Many of those variety shows brought together edgy rock groups who sang – if a bit obliquely – about drugs and whatnot, right alongside what most would consider “square” performers.

“Life was so simple then, in comparison to today,” Castro observes. Cable TV didn’t exist; FM radio was just starting up.” Pop culture was more homogeneous. “And we we thrown onto those shows,” he says, “for the kids. Variety shows were for Mom and Dad and the family…’And now, for the kids, here’s the Blues Magoos!’ So it was taken in stride. In those days, if you had a hit record, these were the normal things that got done. But it was like being in a dream state for me, because I was so young.” 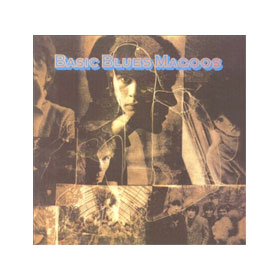 The Blues Magoos’ third release, 1968’s Basic Blues Magoos, is held in high regard among critics today. But it failed to chart at all. “I don’t know if a lot of people know this,” Castro says, laying out the circumstances that led to its commercial failure. “’Pipe Dream’ was the first single from Electric Comic Book. In those days – and nothing’s changed, really – the conglomerates owned the business. And every ABC-owned or -syndicated AM station – that means hundreds of radio stations, all over the United States – banned the record. Because they were afraid of the drug reference.”

It mattered little that “Pipe Dream” carried what was effectively an anti-hard drugs message; that nuance was lost on the suits. “We thought we were putting a positive message on it,” Castro says, “but purely because of part of the lyrics, WABC banned it.” And other stations quickly followed. “We lost the record, basically,” Castro sighs. “Mercury panicked, and they flipped the record, making ‘There’s a Chance We Can Make It’ the new a-side. And then that went Top 40. But once we got banned by ABC, the vultures were out. There was a smell of, ‘These guys got one hit, but their second one didn’t make it. So…’ And thus came the one-hit-wonder tag upon the band.” Going forward, Mercury’s promotion of The Blues Magoos was halfhearted at best.