“Damn! We thought you was dead! We thought you died in…nineteen-whatever!” That’s Swamp Dogg, recounting a common reaction he gets when people meet him in person. He’s very much alive, living in Los Angeles, and as busy as ever.

In his 2003 book, Lies and the Lying Liars Who Tell Them, Al Franken (now Senator Al Franken, D-MN) made a goal of re-popularizing the phrase “kidding on the square.” In short, as Franken describes, it means, “kidding, but also really meaning it.” The phrase – and the practice it describes – has been around for years, but one of its most skilled practitioners has long been laboring without the recognition he deserves. Since 1970, Swamp Dogg (aka Jerry Williams) has been releasing albums that combine sociopolitical commentary with music. He’s sometimes compared to Frank Zappa, but Williams’ music has always been based in a tuneful, groove-oriented approach. 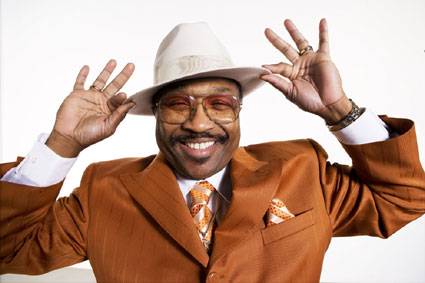 Swamp Dogg got his start as a soul singer, producer and arranger using his own name; after scoring a hit (at age 24) with the 1966 single, “Baby You’re My Everything,” he landed a job as an in-house producer at Atlantic Records.

But it was in Williams’ guise of his alter ego Swamp Dogg that he began crafting his most enduring work. Songs like “Mama’s Baby, Daddy’s Maybe” (from his debut LP Total Destruction to Your Mind) set the tone for Swamp Dogg’s approach: lay down a catchy groove, arrange it in an almost-slick (read: commercial) way, and then put some provocative and/or controversial (but always humorous) lyrics on top of it. If you put on one of his albums – say, 1971’s Rat On, with its oft-voted Worst Album Cover Ever – and don’t listen closely, you might think you’re just hearing some really good, undiscovered 70s funk-soul-r&b. But then you pay closer attention to the words in a song such as “These Are Not My People,” and you discover – as Sly Stone, one of Swamp Dogg’s heroes, might say – there’s a riot goin’ on. (Be sure to check out his new ode to the man, “Where is Sly?”) 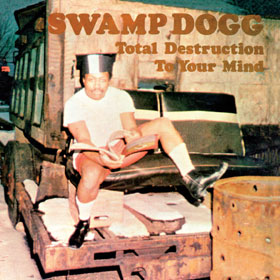 For his trouble, Swamp Dogg earned (and still deserves) the label “cult hero.” His efforts have rarely translated into fiscally profitable results. Still – thank goodness – he marches on, and his latest album, The White Man Made Me Do It (his 21st long player) shows that time has blunted neither his sharp wit nor his musical skills.

I first learned about Swamp Dogg in the pages of Richie Unterberger‘s Unknown Legends of Rock’n’Roll. Unterberger’s profile of Swamp Dogg gave me a good sense of the man’s pointed, intelligent wit. With his songs that tackle universal and always-topical themes such as racism and inequality, that wit comes in handy. “It’s difficult to get a person’s attention,” Swamp Dogg observes. “But then even after you get it, it’s a challenge to hold it. So doing a little parody-type lyrical thing always helps.” 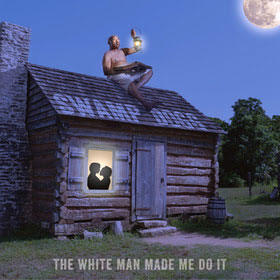 While never heavy-handed, Swamp Dogg often manages to convey real content in his songs. The title track on 2014’s The White Man Made Me Do It is a good example; the song’s extended outro features Swamp Dogg listing lesser-known African-Americans who have contributed to society in notable ways. The tune is almost a history lesson. Asked why he didn’t mention Garret Morgan, credited with development of an early traffic signal, Swamp Dogg says, “I didn’t want [the listener] to feel like you went from entertainment in your living room to a schoolhouse.”

“The point is,” he continues, “there are hundreds – thousands – of legends who blacks can take as idols. They will take a football player right out of college – somebody who’s had two great years – and all of a sudden he’s deemed a role model. And he hasn’t really done anything to make him a role model. You can be a role model if you’re [still] alive, but I think you gotta have a lot of age on ya.”

Still, Swamp Dogg is no finger-waving, pull-your-pants-up sermonizer; he’s always about entertaining first, and holds on to his irreverent attitude: “George Washington Carver didn’t rape no white girl in school, or any of that bullshit,” he points out. Then he quickly adds, “And if he did, he got away with it!”

Swamp Dogg is adept and comfortable trafficking in a wide array of styles: funk, soul, blues, disco, country. He views the various genres as “different dimensions of one big thing. You’re always using something from another genre, even if it’s only five notes, or six notes, or a lick.”

Unlike many r&b artists – especially ones who recorded in the 60s and 70s – Swamp Dogg has worked hard to regain control over his back catalog. Nearly all of his albums are available in authorized versions – in one format or another – via his website, swampdogg.net. Swamp Dogg mentions his experience many years ago with the people at Louis Drozen‘s Laff Records, a label that primarily released raw-and-raunchy comedy albums (by artists such as Redd Foxx and LaWanda Page) squarely aimed at a black audience. “They made a cover for the self-titled album. It was a picture of me. In a swamp. With a dog. With a dog! It was awful! I said that I wanted to make my own cover, and my wife said to me, ‘Look at the covers you make! They’re no better!’”

Several Swamp Dogg albums (but not the Laff Records one from 1982) are available on physical CD, on the Alive Natural Sound label. The different formats sometimes feature different material: the CD version of The White Man Made Me Do It includes a bonus disc of songs featuring production, arranging, and/or writing by Swamp Dogg; tracks include sides by Irma Thomas, Z.Z. Hill, Swamp Dogg himself, and more. Swamp Dogg notes that another format of the album doesn’t include those tracks, instead featuring “an excerpt from my autobiography, which is called Kiss My Ass.” 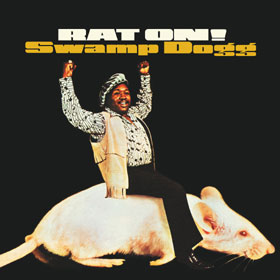 “People can buy it when I finish it,” he says, and then his voice trails off, slightly perplexed: “Richie Unterberger is supposed to be writin’ it with me. It’s either him or Ben Greenman. I’ve been so busy.”

Swamp Dogg continues, “I’m trying to do like they did in the old days – though ain’t nobody want to bring back the old days – put my stuff out through two different distributors.” Red Eye and Burnside (the latter “my distributor for the last twelve years or so,” Swamp Dogg says) handle distribution of his physical product. “And what I love about them is, not only do they work, but they pay ya! Motherfuckers’ll send you a check every month. I don’t care if it’s only $37. They’ll send you a check for $37 or $37,000; they don’t care. As soon as they get paid, they pay you. And if they don’t get it, you don’t get it.” He believes that if record companies did business in the past like the companies he works with do now, “the business would not have gotten as fucked up as it is.”

Asked about any plans for upcoming live dates, Swamp Dogg mumbles vaguely about some efforts his “acting manager-at-large” is making, and then stops, brightens, and laughs. “In answer to your question, no, we don’t have any work!” But he fully expects that to change. “We’ve gotten rave reviews everywhere we’ve gone,” he says. “We haven’t been booed offstage yet.”

As a matter of fact, thanks both to the availability of his music, and to its timeless themes, Swamp Dogg is gaining new fans. “I’m acquiring a new audience. I done fucked around and outlived my [older] audience,” laughs the 72-year-old. “Them motherfuckers are dropped dead. But luckily, some of the kids heard my shit bein’ played around the house.” Swamp Dogg says his current audiences are “young, and they aren’t afraid of people who speak out.” And they’re open to the themes found in songs like “Prejudice is Alive and Well” on his latest album.

Swamp Dogg is refreshingly modest about his work. “I ain’t never told nobody that what I was sayin’ is total truth,” he insists. “It’s what I feel. Just what I feel.” And he’s sincerely happy to sit down for conversations with writers like myself. “You’re helpin’ keep me alive,” he says. “I mean it: people think I’m dead!”