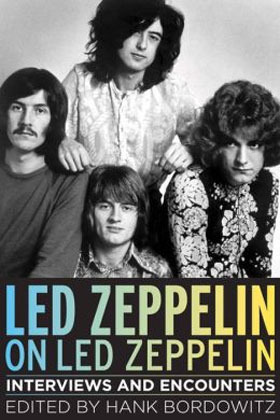 It’s often unfortunate when a writer with an axe to grind pens the history of one of music’s great historical figures. It borders on tragic when such a work – often with its own very narrow point of view – slips into popular consciousness as something approaching a definitive history. It happened with Albert Goldman‘s trashy biographies of Elvis and John Lennon, and it happened again with Stephen Davis‘ 1985 book Hammer of the Gods. That book focused almost solely on the legendary bad-boy antics and decadent lifestyles of Led Zeppelin.

While few would argue that the lurid episodes described in Hammer of the Gods were cut from whole cloth, the truth was perhaps less sensational than the book made it out to be. In all likelihood – if the true stories of other bands are any indication at all – many of the most salacious stories described in Hammer‘s pages involved the roadies more than the band members.

No matter; the point is that the music is what brought most readers to that book and ones like it; you wouldn’t have waded through No One Here Gets Out Alive if you didn’t dig the music of The Doors, now would you?

So it’s refreshing to have a book about Led Zeppelin that focuses more on the music and the personalities of its members. Led Zeppelin on Led Zeppelin is exactly such a book: editor Hank Bordowitz has taken on the massive task of digging up (and getting clearances for) dozens of interviews with the four members of Led Zeppelin. And unlike, say, The Beatles Anthology text – an essential work – Led Zeppelin on Led Zepeplin takes the band at their word, but in real-time.

What I mean is that each of the interviews compiled in this book is presented in its original form, not reconstituted with the benefit of hindsight. No, Jimmy Page and Robert Plant (and to lesser degrees, John Paul Jones and John Bonham) are here in print giving their answers to (largely) intelligent questions posed by rock journalists of the day. So there’s no how-will-history-view-this attitude presenting itself in their answers. Other than Bordowitz’s brief and useful introductions, each of the interviews provides the reader with a clear picture of what the men in Led Zeppelin were thinking and saying when they thought and said it.

The band members take themselves seriously, but not too seriously. They were just about the biggest band on the scene in those days, but – especially when chatting with the better music journos of the day, the ones they trusted – they are candid and forthright. They laugh off or dismiss a great deal of the hype that surrounds them, yet they’re not afraid to discuss how they see themselves and their music fitting into the big picture.

It’s entertaining to gain a sense of the individual personalities, and to better understand each of their relationships to the band and the myths that surround it. Fascinating, too, is to read contemporary discussions about their post-Zeppelin endeavors. Interviews about The Firm, for example, would otherwise fade into the mist: I mean, how likely would one be to dig up an interview with Jimmy Page in which he discusses his work with (Plant nemesis) David Coverdale? Placed here in the context of the overall Led Zeppelin story arc, such content is much more illuminating and worthwhile than it would otherwise be.