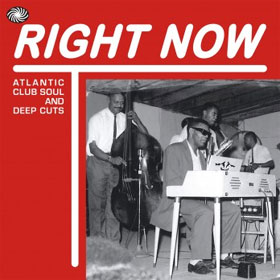 I’ve observed before that Fantastic Voyage makes full advantage of the unique copyright/licensing laws as they exist in the UK; in the United States, putting together a package such as Right Now would be prohibitively expensive, and also certainly a money-losing proposition.

As it is, once again we have Fantastic Voyage to than for compiling a peerless set of music, classic recordings that have long gone unheard by all but the most fanatical crate diggers. The mighty Atlantic label – along with its Atco subsidiary label – was home to some of the best rhythm and blues, soul, rock and roll, and blues artists. And while the most well-known cuts are easily found in myriad places, there are countless “deep cuts” that are rarely heard. Many are excellent songs, and quite a few are of great historical import. And on this new 3CD set, 86 of them are collected in best-available sound quality.

Most of the Atlantic r&b greats are represented here: Solomon Burke, Ben E. King, Ray Charles, Ruth Brown, LaVern Baker, and The Isley Brothers are just some of the artists found on this set. But it’s the lesser-known cuts that surprise and delight the most. So while Joe Turner‘s seminal rock’n’roller “Boogie Woogie Country Girl” is here in all its influential glory, so is the amazing “Right Now” by – of all people – Mel Tormé. Electric piano and combo organ are out front in a Cuban-flavored tune that – like so many of the tunes here – sounds like the missing link between rock’n’roll and pretty much any other earlier style you’d care to name.

The lyrical themes here are pretty much the usual stuff: love, betrayal, sex. The Coasters‘ “I’m a Hog For You” is a random and delightful example. Making things more interesting than they might otherwise be, Right Now compiles well-known artists doing lesser-known versions of of well-known tunes: so we have The Top Notes (instead of The Isley Brothers) doing “Twist and Shout,” and Stick McGhee & His Buddies‘ 1950 recording of “One Monkey Don’t Stop No Show” (instead of any of the successful cover versions). Joe Turner makes Lead Belly‘s tune absolutely swing with “Midnight Special Train.”

Lois Wilson‘s detailed liner notes provide the context so often missing in lesser compilations: every tune is noted with its Atlantic or Atco matrix number, release date and composer. Wilson also presents brief, concise background (when available) on the artists and songs included.

Right Now focuses primarily on the 1949-1962 period, in part because of (once again) the UK’s approach to copyright of older material; in practical terms, this might mean that a decade from now – if we’re very lucky – Fantastic Voyage might put together some amazing compilations of Atlantic material from the Muscle Shoals/Stax era.

Fantastic Voyage has released a raft of worthy historical compilations, but Right Now may well be the very best from among them.