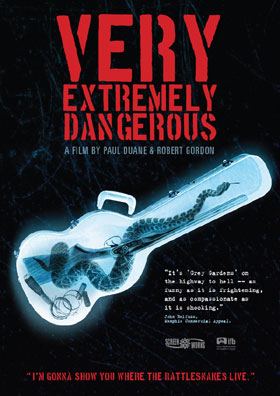 There are antiheroes, and there are antiheroes. One supposes that Jerry McGill is one. He certainly possesses a primary prerequisite: a worldview that measures everyone and everything though the whatt’s-in-it-for-me lens. I’m hesitant to throw around the terms narcissist and sociopath, but if you have a working knowledge of how those labels apply to a human being, you’ll likely find that the character as portrayed in Very Extremely Dangerous pushes some of those buttons.

McGill was pretty much a footnote in the Sun Records story; he released a 1959 single for the label before flaming out. While he made a brief – and exceedingly menacing – reappearance in William Eggleston‘s Stranded in Canton, a mid 1970s black-and-white film that sought to document the underground scenester vibe of Memphis in those days, McGill spent most of the time between the early 1960s and present day either in jail, on his way to jail, or running/escaping from jail.

And he got into plenty of trouble when he was on the outside. McGill has that particular character type, one that mystifies most of us, but is completely irresistible to a (sad) select few. So it is that his sidekick through many of his misadventures figures largely in Very Extremely Dangerous. So it is, too, that said sidekick is summarily tossed aside – not that by most reasonable standards he didn’t deserve it – and then disappears completely from the narrative. (That he died is a perfunctory postscript; sorry for the spoiler, but like McGill, Very Extremely Dangerous is nothing if not wholly unsentimental.)

McGill has a girlfriend, too, and she’s a major character in the story. But she doesn’t allow her face to be shown on film, suggesting she has some modicum of self-respect and dignity. But her presence in McGill’s story at all strongly suggests otherwise. Meanwhile, McGill, abusive junkie that he is, fails to earn this viewer’s sympathy even as he faces life-threatening illness.

The film is as much about Irish documentarian Paul Duane trying to make the film; this device has been used countless times in films, and it works reasonably well in this example. The viewer is party to the frustrations – and life-threatening situations – that Duane faces in his quest to document McGill and his story. But some viewers may well ask: why bother? McGill is a musician of limited means, and knowing more about him may have the effect of making the viewer less, not more interested in his music. It had that effect upon me.

The film is a collaborative effort between Duane and celebrated music journalist/author Robert Gordon. Gordon himself never appears in the film, though his name (and tapes from his answering machine) figures prominently in the story. Knowing Gordon’s peerless storytelling abilities, one wonders why he is (seemingly) not more involved in the film itself.

Throughout the film, the viewer may find him or herself waiting for that moment of redemption, that denouement in which all things come together to deliver something resembling a happy ending. Or at least some kind of resolution. If that’s what you’re looking for, you will come away from Very Extremely Dangerous very extremely disappointed. View it with an open mind and take the story for what it is, and you may – just maybe – find value in it. You might even like McGill’s music. But you probably won’t like or respect him. If you do, seek help immediately.

(Note: by the film’s end, McGill is – against all odds – still alive. He’s dead now. It’s hard to imagine that he’s missed by many.)