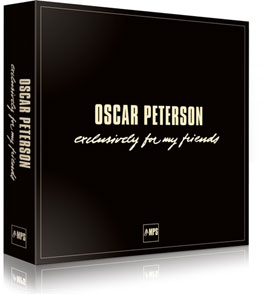 Oscar Peterson was one of the most beloved figures in jazz. His recording career began in 1945, got fully underway in the 1950s, and tapered off as his health declined (he passed away in 2007). His catalog of recorded works is vast – well in excess of 200 albums – and contains many records considered essential to serious jazz fans.

One of the most interesting chapters in his discography is the series of albums released under the heading “Exclusively for My Friends.” In 1968, Montreal-born Peterson recorded six albums, all recorded in the small German city of Villingen-Schwenningen, specifically in the private living-room studio of Hans Georg Brunner-Schwer. (A ’65 session at Brunner-Schwer’s forms part of one of the discs.) Working in various configurations – solo piano, as a trio – Peterson effortlessly wound his way through the Great American Songbook, standards, show tunes, and (occasionally) his own compositions. These intimate performances – some of which were recorded in the presence of a small, invited audience – have been combined in a lavish, 6LP set titled Exclusively For My Friends.

The six LPs that make up this set –all of which The Penguin Guide to Jazz considers part of a jazz “core collection” – were originally issued in the late 1960s as individual albums; in 1992 MPS (the original issuing label, owned by Brunner-Schwer) licensed the set to Island Records, who reissued the material in a 4CD box set. But now in 2014, MPS has brought the material back to market in its original format. 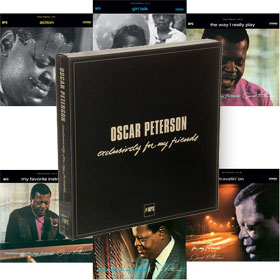 Well, more or less. In many ways, the new Exclusively for My Friends box set is the best of all possible worlds, an improved version of the originals. The records have all been pressed on 180 gram virgin vinyl. The utmost care has gone into the remastering of the albums (a liner note essay from MPS Producer Dirk Sommer titled, “Best Sound or Faithful to the Original?” explains the process (Sommer answers his own question: “Yes!”), noting that the entire audio chain of sequence is analog (AAA). The sound reproduction on these vinyl LPs may well be the finest I have ever heard. The care that went into the original recordings has been sustained straight through to the mastering and pressing of these new vinyl reissues.

The packaging is stunning as well. Each of the LPs is housed in its own gatefold sleeve, complete with the glossy, four-color artwork featured on the original LPs. The box that holds all six is quite sturdy, and classily understated in its design. But of course it’s the music that’s the real story here.

Action (Vol. 1)
The first recording in the series, Action (recorded 1968) finds Peterson joined by Ray Brown on bass and drummer Ed Thigpen. Tunes from the songbooks of Cole Porter (“At Long Last Love”) and the Gershwins (“I’ve Got a Crush on You” and “Foggy Day”) make up more than half of the disc. The watchwords here are nuance and subtlety: Peterson’s deft, lyrical piano work is the centerpiece of the session.

Girl Talk (Vol. 2)
This album – also originally released in 1968 – combines two sessions, one dating from the year of its release, and the other circa 1965. Louis Hayes (drums) and bassist Brown join Peterson on two tracks, including a medley of Porter and Johnny Mercer tunes; Bobby Durham and Sam Jones are in the studio with Peterson on the remaining numbers. 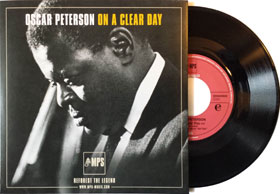 The Way I Really Play (Vol. 3)
Jones and Durham again support Peterson on the third album in the series, recorded April 1968 (and likely from the same session that yielded much of Girl Talk). This set is notable for featuring the only original Oscar Peterson compositions in the series, “Sandy’s Blues” and “Noreen’s Nocturne.” Elsewhere, it’s more classics from the pens of Gershwin and Mercer, among others.

My Favorite Instrument (Vol. 4)
For this set (also recorded in April 1968), Peterson goes solo to showcase a set of standards including “Take the ‘A’ Train” and “Body and Soul.” Peterson’s readings are short and to the point: though the run time on the album is roughly the same as the others in this series (around 40-42 minutes), this set features more songs.

Mellow Mood (Vol. 5)
The title of this album – again from ’68, again with Jones and Durham on hand – is a bit misleading: it’s no more or less “mellow” than the other entries in the series. Another interpretation of a show tune (Anthony Newley and Leslie Bricusse‘s hit “Who Can I Turn To,” from the 1964 musical The Roar of the Gresepaint – The Smell of the Crowd) and more from both Duke Ellington and the Gershwins feature alongside Horace Silver‘s “Nica’s Dream.”

Travelin’ On (Vol. 6)
The last in the series – from the same sessions that yielded Mellow Mood – takes its title from the traditional song, here given a blindingly fast and precise reading by Peterson’s Trio. Francy Boland‘s “Sax No End” was a relatively new tune at the time of the Trio cutting their version of it here.

A limited-edition, promo-only 45rpm disc in picture sleeve of “On a Clear Day” (from Girl Talk) and “Alice in Wonderland” (from The Way I Really Play) went out to lucky reviewers. This new 6LP set is also available on open-reel tapes; those of a certain age may recall that in the late 60s and early 70s, open-reel tapes were the format of choice for audiophiles; these limited-edition tapes follow the same all-analog processing chain as their vinyl counterparts. Exclusively for My Friends is, as it happens, not exclusively for those with turntables or open-reel decks; the individual albums are also available in digital format – that would be AAD (analog recording, analog mixing, digital mastering) – for purchase/download from MPS.