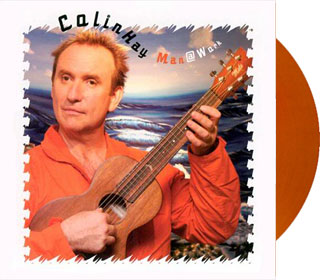 If you’re a pop music listener of a certain age, you remember Men at Work. Smiling, photogenic darlings of early MTV, they broke through in that early period of the cable channel, a time when – because the major labels and artists didn’t yet take music video seriously – a raft of new pop acts broke through into the mainstream.

While Men at Work’s videos were fun, visually appealing slices of pop culture/product, it hurt not a bit that the band crafted infectious, upbeat tunes. And so it was that the Band From the Land Down Under scored a string of hits. But as it was with so many of the era’s stars, the group that introduced Vegemite® into the North American lexicon burned brightly on their first two albums (1982’s Business as Usual, and Cargo from the following year) and then faded as quickly; their third album (1985’s Two Hearts) achieved neither critical plaudits nor any sort of significant record sales.

But their songs were enduring slices of highly melodic pop. As recently as last year, I created a Pandora “station” for casual listening around the house. The station was built around the music of one of my most treasured bands, Crowded House. And though they came on the scene a bit after Men at Work, the New Zealand/Australia-based band traveled in sonic territory that (at least according to the complex algorithms that Pandora uses) isn’t miles away from what Men at Work did. So it was that several of Men at Work’s songs popped up on the “station.”

But the versions I was hearing weren’t the originals: instead, they were re-recorded, sometimes slightly rearranged readings from the group’s singer, songwriter and front man, Colin Hay. (Hay was born in Scotland, by the way, but yes, he’s the guy you think of when you picture Men at Work in your mind’s eye.)

These new versions, as it happens, were originally released on Hay’s 2003 album, Man @ Work (a self-explanatory title if there ever was one). Man @ Work was Hay’s eighth album; he began his solo career in earnest with 1987’s Looking for Jack, released not long after Men at Work had broken up. That string of solo releases is held in reasonably high regard by many critics, and the releases chart Hay’s gradual reinvention as a singer/songwriter (primarily on acoustic guitar), shedding his ostensible “new wave” image (though there was precious little about Men at Work that truly qualified as new wave). With Man @ Work, he applied his current, stripped-down style to the songs that had originally brought him to fame. The album does revisit a bit of his solo catalog, but for the most part, it’s about recasting the Men at Work hits and album tracks in a mold that’s less dated – no 80s drum sounds nor PPG Wave synth burbles here – so as to fashion the tunes in a more, shall we say, time-honored fashion.

Hay delivered these recast versions not only on Man @ Work, but – more crucially and with a much higher profile – also onscreen, with an occasional appearance on the American sitcom Scrubs (that show’s Zach Braff is a major fan of Hay’s work). Hay also toured with Ringo Starr‘s All-Starr Band in 2003 and 2008. Meanwhile, however, Man @ Work reportedly sold 100,000 copies yet clearly escaped the notice of many people who would have enjoyed it (read: me).

It seems that Man @ Work is a pretty fair distillation of Hay’s current musical guise as a solo pop-centric troubadour, and as such, the decision was made to reissue the album in 2014. Moreover – and again recalling the early 1980s – Man @ Work is now available as a vinyl release.

The 2003 CD release of Man @ Work featured thirteen tracks; the 2014 vinyl reissue (with the appended front-cover subtitle of [acoustic vinyl]) drops five tunes: “Looking for Jack,” “Storm in My Heart,” “Don’t Be Afraid,” and “To Have and To Hold,” all tunes from his solo career, and “Be Good Johnny,” one of the Men at Work hits. And then he adds a few new (or should I say, “new”) tracks, including a radio edit of “I Just Don’t Think I’ll Ever Get Over You.” Another new track of note is a reading of Business as Usual‘s “Down by the Sea,” here featuring Hay’s longtime bandmate Greg Ham (the guy who played the flute in the tree, and lost a 2009 plagiarism suit for its riff). That track would be the last time Ham and Hay collaborated in the studio; Greg Ham passed away in 2012.

The resulting retooled album represents an improvement over the 2003 release: the hyperkinetic “Be Good Johnny” in particular was ill-served by being recast as an acoustic number. But overall, the 2014 collection of new-old and old-old versions of old-old-old tunes will remind listeners that those Men at Work songs had a whole lot more going for them than just their amusing, heavy-rotation video clips.

Hay’s voice has changed little in the decades since Men at Work, and though the acoustic-led versions (many of these songs feature full-band, electric backing, albeit with Hay’s six-string and voice out front) are more subdued and subtle than the Men at Work originals, that serves mainly to highlight how strong the melodic lines really are. If Hay’s versions sound like anybody else, their combination (most notably on “Down Under”) of gentle acoustic guitar and drum machines is very reminiscent of yet another antipodean act, Flight of the Conchords.

So while the point can be made (and certainly was upon Man @ Work‘s original release) that this album of greatest hits self-covers seems a dubious enterprise, the reworked versions present the songs in a manner that – not to overstate things – is timeless. Hay’s readings remind us of the quality of the songs, without forcefully conjuring mental images of a guy in a palm tree playing a wooden flute. For that alone, Man @ Work has value. That it’s a pleasant listen makes it even better. Though it falls somewhere short of being an essential purchase, it’s recommended to those who might think or say, “Sure, I liked those hits that Men at Work had back then, but I never listen to that stuff now.”