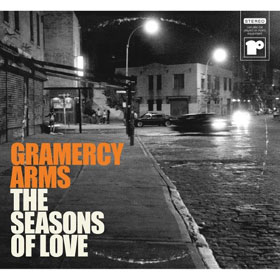 As a rule, I make it a point to avoid reading reviews of an album before writing a review of my own. I don’t want my opinion formed by the undue influence of some other reviewer’s point of view. But I do like to do a bit of basic research – to get some background – before I write about an album. And so occasionally I accidentally stumble across a review during that endeavor.

That’s what happened while I was looking for a bit of information on The Seasons of Love, the new album from Gramercy Arms. I got the CD some time ago, and by the time it came to review it, I had largely forgotten the background of the group (whom I had not heard of prior to this year). I had a vague sense that Gramercy Arms is some sort of supergroup (akin to The New Pornographers, who I’ll be seeing in concert next week) or perhaps someone’s side project. (Neither assumption was correct, as it turns out.) In my quick search for details, I found a review that described the group’s sound as “slightly cheesy.”

Whoa. Hey, I understand that one man’s Velveeta is another man’s fine fromage, but there’s nothing cheesy about The Seasons of Love. Yes, the songs do concern themselves largely with matters of life and love – the song titles make that plain – but this is some high quality stuff. Perhaps someone raised on a steady diet of 90s grunge rock might find the melodic quotient too high, but for anyone who appreciates the melodic sense of, say, Paul McCartney, Gramercy Arms’ new album is a real treat.

For those attuned to melodicism, The Seasons of Love ensnares the listener right out of the gate. “Always in Love” has a sprightly, upbeat, piano-and-drums led rhythm that strongly recalls Electric Light Orchestra‘s “Mister Blue Sky.” Or perhaps Ben Folds Five‘s masterful “Kate.” It sounds unlike either of those, really, but there’s a composition-in-the-proud-tradition vibe that tells you they know and appreciate a good, strong tune.

Knowing, lived-in lyrics come at you rapid fire; throwaway lines rush by quickly, but if you catch them, you might crack a little smile when you hear “you and whatshisname still goin’ strong” and such. Economic use of horn charts is a hallmark of the tune (and the album as a whole) too.

The minor-key soulful tip of “Beautiful Disguise” makes it clear quickly that Gramercy Arms aren’t all about sweetness and light. But there’s a sense of authenticity in this achingly beautiful song. Gramercy Arms is the project of Dave Derby, a songwriter who busies himself with all manner of projects including work for film and television. That commercial media focus shows itself in his accessible approach to songwriting. And Derby is a fan of that reliably melodic kind of music; on The Season of Love, he enlists some of his friends/heroes; their talent shines throughout the record. Erin Moran (not the actress but instead the artist also known as A Girl Called Eddy) is one; Lloyd Cole (who has his own excellent new album, to reviewed here soon) is another. Matthew Caws (Nada Surf) and Tanya Donnelly (Throwing Muses, The Breeders, Belly) are two more.

Still, it’s Derby’s show. And not all of the songs are built around piano: “The Night is Your Only Friend” is a shimmering acoustic guitar-based tune that strikes a note halfway between the bright pop of “Always in Love” and the melancholy of the slower numbers. Strong melodies and sharp hooks are supported by memorable lead guitar runs and soaring , carefully-placed horn charts.

“Novemberlong” is another winning tune in that classic pop mold, but “Playing With Fire” weds reverbed, spaghetti western guitar and a sting section (violin, voila and cello) and what sounds like a pedal steel guitar to create an intimate, somber, contemplative mood. “Yours Untruly” launches with a slow-as-molasses drum beat that gives way to a soaring arrangement that is reminiscent of Polyphonic Spree; the massed vocal chorus strengthens that connection, but the distorted lead vocal and stabbing, soaring guitar leads keep it more in rock territory.

“The Season of Love” (note the slightly different spelling) features lead vocal from Donnelly and Verena Wiesendanger; oddly enough, it sounds like Elliot Smith supported by a Burt Bacharach arrangement. Put another way, it’s pure pop bliss, and if Mike Myers ever makes that rumored fourth Austin Powers film, it belongs on the soundtrack.

“Say the Word” is another unassuming yet lovely pop tune with lots of oooh vocalisms. “Thin” wraps up the album in somber fashion, with a funereal pace punctuated by sustained piano minor chords. As the tune unfolds, more instruments – gurgling organ, single-note electric guitar lines – are added into the mix. It has the feeling of a slow-waving goodby on a misty morning. And then it’s over. But those who dig solid songwriting with a high melodic quotient would do well to keep an eye and ear out for the next Gramercy Arms album, whenever it happens. Meanwhile the absolutely-not-a-bit-cheesy The Seasons of Love is short-listed for Musoscribe’s best albums of 2014.