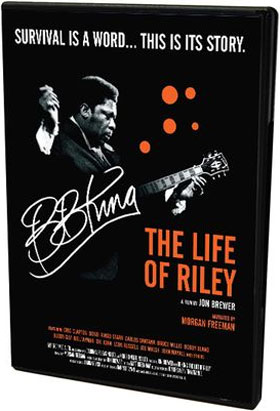 I know people who argue that – as a creative work – the music documentary is dead. They point out that the medium has become a rote retreading of tired techniques; that every possible clever, creative or even interesting method of telling a story onscreen has been beaten to death, leaving only the shell of a concept in its wake.

I understand what they mean. It’s nigh upon impossible to find a music documentary that doesn’t have these four things:

Okay, I overstate things a bit here, both to make a point and possibly elicit a small chuckle. But the fact remains that – like the book says – when it comes to music documentaries, it often seems as if there’s nothing new under the sun.

Jon Brewer‘s new documentary B.B. King: The Life of Riley falls into many of these traps: it has the actors, the post-production, U2‘s ubiquitous lead singer, and Freeman (the last as both off-screen narrator and onscreen “talking head”). But despite its often rote approach, The Life of Riley transcends cliché. This is no doubt thanks to its subject matter. B.B. King is very much the real deal, and so even when tired devices are used to chronicle his life, the substance wins out over the style.

Throughout the film, Brewer’s approach seems to be chronological, but a close watch shows that the narrative often jumps forward and backward in the timeline, in service of the mini-narrative being explored. As much is left out of the story as is put in, and the viewer likely comes away feeling that they haven’t been told the whole story. (For example, we’re left wondering if he’s still married to Sue Carol Hall; he’s not). And his monumental, historic 1974 concert in Africa deserves more than the cursory mention it gets in the film. But in the absence of any other career-spanning look at King, The Life of Riley is what we have. And in the wake of King’s very recent suspension of his tour (for health reasons; he’s currently 89 years of age), now is the perfect time for such a film to appear.

In Brewer’s defense, The Life of Riley is perhaps the only music documentary in which the inescapable likeness and voice of Bono does truly deserve its place in the film. U2 toured and performed with King, and their “When Love Comes to Town” (featuring King on vocals and guitar) is one of the better pieces of music they’ve produced. (It’s less clear, however, why Bruce Willis gets screen time, but we’ll leave that one for another day.) And despite the fact that having Freeman narrate your film has become tired even as a joke device, the man’s clear yet laconic cadence is an excellent vehicle for narration.

As portrayed in The Life of Riley, King is painted as something of a good-natured rascal, one who always has a smile but whom you’d best not cross; it seems once he achieved success, he invariably (and inviolably) got his way. Fair enough: if any musician can be said to have paid his dues, King – who came from indisputably hardscrabble beginnings – is that man.

Music fans will come away from The Life of Riley wishing there was more in the way of performance clips in the film. But for that, there’s always King’s deep catalog of music. His most recent album is the Grammy-winning One Kind Favor; I reviewed it on release way back in 2008.

In the end, unlike its subject matter, The Life of Riley doesn’t yield anything that’s groundbreaking or especially inspiring. It’s perhaps only a small notch above an A&E Biography TV special (do they even make those any more?), but it remains worthwhile viewing.