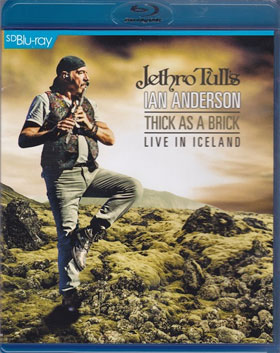 In 2012, Jethro Tull leader Ian Anderson mounted a tour to promote his latest solo album, Thick As a Brick 2: What Ever Happened to Gerald Bostock? The tour and album both represented a high point in the recent musical activity of the ever-busy Anderson.

I saw the Asheville date of that tour in my hometown, and got the chance to interview Anderson for a print feature in advance of the performance. At the time, however, I reviewed neither the album nor the live show. This new DVD (also available on Blu-Ray) is a document of the show, which is in part a document of the album.

While in the last several years, Anderson’s flute playing has actually improved (we discussed that in our first interview, back in 2007), his vocal ability hasn’t fared so well. In fact, a 2010 DVD (Jethro Tull – Live at Avo Session Basel) vividly illustrates what the ravages of time have done to Anderson’s pipes). Still, as the Thick As a Brick 2 album shows, his songwriting and arrangement skills (and, again, his flute playing) remain sharp, reliable tools.

It is clear that Anderson realizes his strengths and weaknesses. And his solution to this set of challenges is nothing less than inspired: he’s added a new character to the onstage lineup. The Yorkshire-born Ryan O’Donnell was born in 1982, the same year Jethro Tull released their fourtten studio album, The Broadsword and the Beast; around the time of O’Donnel’s fifth birthday, Tull received the dubious honor of a Grammy Award for “best heavy metal album.”

But while the young O’Donnell may not have grown up during the classic era of Jethro Tull (arguably 1970-77), his demonstrably understands and appreciates the Tull aesthetic. Leaping about the stage in a most theatrical fashion – and freed from the demands of having to play an instrument – O’Donnell is able to convey not only the sound of his voice (and let it be said that his vocal texture and phrasing are very similar to that of Anderson in his prime), but the movement and visual flourishes so critical to the narrative of Thick As a Brick 2.

O’Donnell’s onstage presence allows Anderson to have it both ways: he can play his delightful flute parts – including ones that overlay the vocal lines, something he’s obviously never been able to do before now – and he can sing the parts of his signature vocals that lie within his diminished range. And with O’Donnell’s help, it all sounds as good as it possibly can.

Thick As A Brick 2 picks up the story of the child character Gerald Bostock, now fully grown and full of modern malaise. Onstage, Anderson and his team make full use of video clips at key points in the story; these – starring Anderson in one of several character roles – show that in addition to his myriad other skills, the sixty-something Anderson is a fine and natural actor.

Thick As A Brick 2 is full of humor, sarcasm, wit, drama…and lots of good music. Similar to the approach used on the original 1972 Thick As A Brick, the work is presented more or less as a single piece (yet with its sections distinctly titled), and is built around a central musical motif. But unlike, say, Roger Waters‘ three-note riff that represented most of Pink Floyd‘s 1979 The Wall, the Thick As A Brick 2 motif is at its core quite musical, and involved enough to sustain its use across an entire album.

The 2012 performance in Iceland is – by design – nearly identical to the performance I witnessed that same year in Asheville. The choreography dictates that this is so. The first half of the performance is a live reading of the 1972 album; after a brief intermission ,the band returns to present Thick As A Brick 2. And while when I first heard the modern-day sequel (studio version), I sensed that it paled somewhat in comparison to the ’72 album, when the two pieces are performed live, end-to-end, Thick As A Brick 2 benefits greatly. It’s a worthy successor to its predecessor. And with the flawlessly performed, filmed and (courtesy of King Crimson‘s Jakko Jakszyk) audio-recorded DVD Thick As A Brick Live in Iceland, fans of Anderson and Jethro Tull are presented with a must-have purchase. And that’s no mean feat for someone like Anderson, producing vital works some 45 years after releasing his debut album. If you like anything you’ve ever heard from Anderson, you definitely won’t want to sit this one out.