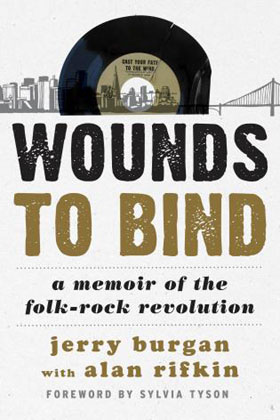 The 1960s music scene was populated with people who – if they survived – have tales to tell. First-hand witnesses to (or participants in) the social and cultural upheavals that changed the way we looked at the world; movers and shakers in the development of new and groundbreaking musical forms: those are the stories we enjoy reading.

With due respect to Jerry Burgan, one of several guitarists in folk-rock group We Five, his new book Wounds to Bind: A Memoir of the Folk-Rock Revolution is not a leading exemplar of those kinds of stories. This is not to say that his tale isn’t interesting; it most certainly is, and he (aided by coauthor Alan Rifkin) tells his story in brilliant detail, with much shade, light and color.

But the thing is, We Five are notable in equal parts for having one hit (the gloriously spine-tingling “You Were On My Mind”) and, it must be said, for being on the periphery — as opposed to being an active part —  of the scene. As worthy as “You Were On My Mind” was and is, the group didn’t write the song – Sylvia (Fricker) Tyson composed it. And Burgan didn’t come up with We Five’s inventive arrangement: guitarist/arranger Mike Stewart did that.

To his credit, Burgan never casts himself in the role of hero/protagonist: he never makes outsized claims as to his importance. Instead he places himself as close-proximity witness to the events that unfolded around him, and his recounting of the story maintains his sense of awe and wonder. Wounds to Bind isn’t a score-settling tome: Burgan has good things to say about (nearly) everyone with whom he worked. Still, Wounds to Bind does present one man’s perspective on the folk rock scene of the mid 1960s.

Burgan is at his rhapsodic best when writing about the arrangement and recording of “You Were On My Mind.” His (and Rifkin’s) written deconstruction of the song and its genesis serves to highlight the brilliance of the We Five version of the Ian and Sylvia tune. In fact, theirs is less a “version” and more a rethinking: in addition to changing the lyrics (for airplay), Mike Stewart and company created lyrical emphases that didn’t exist in the original, and added instrumental flourishes that made the song a timeless, transcendent piece of earnest folk-pop-rock.

Burgan’s recounting of his time on the road in Dick Clark‘s traveling revue is also a richly rewarding read. Of particular note are his characterization of Paul Revere and the Raiders, and his telling of a Thanksgiving episode in rural West Virginia. And Burgan rightly highlights the significance of having drummer John Chambers in the band in a time when mixed-race groups were highly unusual (to say the least). And his stories about We Five (by then on the downhill side of success) performing in front of ultraconservative audiences in Texas and Utah are well-told and (rare within the context of the book) simply hilarious.

The fact of the matter remains that We Five never capitalized on the success of their lone hit single. Near the book’s tail-end, Burgan recounts a recent conversation with Jerry Moss, co-founder (with Herb Alpert) of A&M Records, the label that released We Five’s music. Moss apparently has fond memories of the first We Five album, struggled to recall the second…and as for the third? Nothing. That same reaction likely holds true for even the hardest of hardcore sixties folk fans: nothing We Five did post-”You Were On My mind” got notice, and – based on Burgan’s telling of the story – not a whole lot of it was all that memorable anyway.

And therein lies the challenge in a book such as Wounds to Bind. The story that most people want to know about takes place within the space of a few years in the middle of the 1960s. But of course Burgan can’t just leave it like that; doing so wouldn’t make sense. So a chunk of the book (arguably a disproportionate amount) is given over to discussing events post-”You Were On My Mind.” Sadly, it gets less and less interesting – and farther from the core of the folk-rock story – as it goes along. Anecdotes about Burgan and his wife playing desultory gigs in Las Vegas and Reno are more than a little depressing, and his memories of Sammy Davis Jr., Jerry Van Dyke, and Gary Lewis are serious downers as well. And though Burgan makes no apologies for it – nor should he – the story of him moving into pharmaceutical sales seems to exemplify the “selling out” that so many sixties luminaries railed against.

That said, Burgan makes it clear that he – unlike pretty much every other figure from that era about whom I’ve ever read – was largely apolitical. And a guy’s gotta eat. So while no one’s questioning his life choices, a significant percentage of Wounds to Bind covers material that’s just not all that compelling.

Sad, too, are the fates met by all of Burgan’s ex-bandmates. Wounds to Bind does “solve” the “mystery” of whatever happened to vocalist Beverly Bivens, but that story might be met by most readers with a resigned shrug and a sigh. Surprisingly little is discussed about Burgan’s wife Debbie’s role as Bivens’ replacement in We Five (documented on the now-rare Return of the We Five and Catch the Wind LPs), beyond the author making clear again and again that Debbie didn’t much care for touring (or drugs).

Some mention is made of the 2009 compilation There Stands the Door, a best-of/rarities CD that shows We Five to far better effect than did their A&M releases, highlighting the fact that the group drew influences not only from folk (such as the group Mike Stewart‘s brother John was in, The Kingston Trio), but Tin Pan Alley and show tunes. That focus suggests that – had We Five held together and been better marketed by A&M, they might have had a shot at a place in the music scene not unlike Spanky and Our Gang achieved. But because A&M had their hands full with “adult” pop (The Tijuana Brass, Sergio Mendes’ Brasil ’66, The Baja Marimba Band), and viewed We Five as too far into the rock sound (ironic considering how little regard its members had for rock music in general), things never went that way.

At its best, Wounds to Bind is a fascinating memoir of an important time in music and culture. Unfortunately, at its worst, it’s simply not all that compelling. Many glaring errors (one moment The Raiders’ lead singer is named Marc Lindsay; the next’s he’s Mark Lindsay, then Marc again; that’s just one example of several I could cite) suggest that Wounds to Bind could have benefited from an editor’s careful once- or twice-over.

Verdict: a qualified recommendation. Parts One and Two are well-written, essential reading, and those who get that far will want to read the rest, but Part Three is downbeat and less rewarding for the reader.