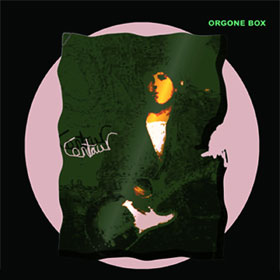 Looking backward for one’s musical inspiration (and/or sound) is not a new approach. Countless bands and solo artists have built careers out of recreating a style that has come and gone, and quite a few of them have won critical and even commercial success for their efforts. But more often than not, when this approach is employed, the results manifest themselves as overly studied: they may impress aficionados of the style, but they fail to offer much in the way of anything new or exciting.

What that means is that when an act that creates a pastiche of an old style comes along and does manage to be new and exciting, it’s a rare thing. And that is what has happened with Orgone Box. Another in a proud and long line of bands-that-are-mostly-one-guy (see also Karl Wallinger‘s World Party, Trent Reznor‘s Nine Inch Nails, etc.) Orgone Box is the brainchild of Rick Corcoran. Corcoran’s approach is to make music that sounds as if it were written and recorded either in 1967 England (think of The Pretty Things‘ SF Sorrow and much of the music on Nuggets II: British Empire and Beyond) and/or the late 1980s (think of the so-called “Paisley Underground” groups out of Los Angeles), and/or the 1990s Britpop explosion (See: Oasis, Cast, Blur). In my estimation, one could do a lot worse than reference those musical touchstones.

Orgone Box’s new album Centaur isn’t really a new album, though: the group’s 2001 self-titled debut contained a dozen songs, and 2014’s Centaur (released on the Kool Kat Musik label) reprises seven of them, albeit with slightly altered titles (and possibly different takes/mixes/versions). (A 2005 album called My Reply may be the source for some Centaur tracks; I haven’t done an A/B comparison.) But the fact that Orgone Box failed to make any impression stateside a dozen-plus years ago more than justifies Kool Kat bringing this fine music to the attention of contemporary audiences.

The entirety of Centaur hangs together nicely, but there are true standouts among the ten tunes. The mid-tempo “Anaesthesia” is vaguely reminiscent of The Church, and features a straightforward and brief but exceedingly memorable lead guitar solo. “Mirrorball” leans on the phase shifter a bit heavily, but it delivers a hypnotic vibe.

The shimmering, folk rock of “Ticket With No Return” sounds like The La‘s fronted by Robyn Hitchcock. And that points out a quality of all Orgone Box music: Corcoran’s voice sounds a heckuva lot like the former Soft Boy. As Corcoran’s themes center more around love and other workaday concerns, he does answer the question “what would Robyn Hitchcock sound like if he didn’t sing about spiders, frogs and lightbulb heads?”

“Hello Central” adds a Help! era jangle to an 80s-style arrangement. But one of Centaur‘s two finest tunes is the earworm of “Judy Over the Rainbow.” Yes, the title alone evokes thoughts of 1967, but the hard-driving guitar riff (effectively doubled in places by the bass guitar) has more in common with Revolver. If you don’t nod along with this tune, you’re probably wasting your time with this review. The song is a delight.

But “Judy” isn’t even the best tune on “Centaur.” That honor goes to “Find the One,” a gentle, breezy We Five-styled folk rocker with impeccable production values. The volume peal work on the signature riff is reminiscent of The Beatles‘ “Yes It Is,” but the tune itself is timeless. Corcoran’s densely overdubbed vocal harmonies (full of la-da-da vocalisms) float effortlessly atop lovely acoustic guitars and softly jangling electric guitars. Some very subtle string synthesizer work adds the finishing touch. Notably, it’s the only track on Centaur that exceeds the four-minute mark.

Much was made at the time of Orgone Box’s debut about the album’s so-called lo-fi production aesthetic. That DIY spirit remains on Centaur, but there’s enough polish here to make one thin the songs were cut at Abbey Road. It’s a fully realized sonic effort.

If you like the sonic approach used on this album, you’ll love the songs. If retro-minded music isn’t your cup of tea, you’ll likely want to look elsewhere for your new-music fix . As for me, I’ll be hoping that Centaur sells well enough to spur the recording and release of more new Orgone Box tunes.

Centaur is available on CD from Kool Kat Musik.