Book Review: The Next Elvis 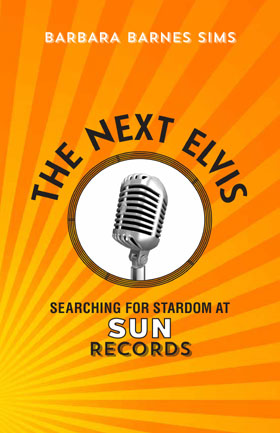 There have been countless books written about Elvis Presley and/or the early years of Sun Records in Memphis, Tennessee. But a new book by someone who was there (for a time, at least) sheds some new light on the tiny yet famous and incalculably important label. Barbara Barnes Sims‘ The Next Elvis: Searching for Stardom at Sun Records is a quick, episodic trip through the period 1957-1960 at Sun Records. The author (then known by her coworkers at Sun as “BB,” short for her then-unmarried name) effectively replaced legendary figure Marion Keisker and worked as assistant to Sam Phillips for more than four years.

Viewed from one point of view, it can be said that during Barnes’ time at Sun, she was firsthand witness to the steady decline of the label: Elvis’ contract had already been sold to RCA; Johnny Cash and Roy Orbison both cut material for Sun and left for greener pastures; Jerry Lee Lewis‘ promising career effectively imploded in the wake of his marriage to his “almost fourteen year old” cousin Myra; and –as Barnes recounts in vivid detail – the promising talent of Charlie Rich was overlooked as not worth nurturing.

Barnes isn’t afraid to shine a light on the shortcomings of her boss and co-workers; she never does it from the standpoint of a dirt-disher; rather, as someone who knew these people as flesh-and-blood humans rather than iconic figures of pop culture history – she merely calls ’em like she sees ’em.

There’s a Mad Man-esque quality to Barnes’ reminiscences of her trips to the big (New York) and comparatively bad (Chicago) cities to take part in the old-boys networks of record company execs, mobbed-up jukebox companies, and the like; the sense of wonder experienced by the young Barnes (then in her mid-twenties) is palpable. Clear, too, is the impression that she was nobody’s fool, no pushover, no shrinking violet.

If you’ve ever read the (relatively brief) liner notes on the back of such treasured LPs as Johnny Cash With His Hot and Blue Guitar! or Dance Album of Carl Perkins, you’ve read Barnes’ prose already. Her writing in The Next Elvis is every bit as clear and concise, but the book’s pace – a slightly choppy series of one- to three-page vignettes (the one-page “Sam Tells Me His Life Story” is an illustrative example) – feels a bit more like a manuscript than a finished book. Also – and, one supposes, befitting a Southern woman now in her late seventies or beyond – The Next Elvis has the feeling of a book that has left out some of the juicier bits.

A few characters from Barnes’ story leap off the pages, characterized by the author as in possession of more talent than their overall success might suggest. Billy Riley (aka Billy Lee Riley) is one; Jack Clement is another. And some of the characters – people you might think of as somewhat lovable – come off as just the opposite (Orbison is one, painted by Barnes as a deeply depressed figure). Of course Jerry Lee is every bit as volatile as one might expect. And The Next Elvis tells the reader more about the overlooked Jud Phillips (Sam’s brother) and his role in the label’s operations than any other book of which I’m aware.

Still, the author’s depiction of the man at the center of it all feels a bit too circumspect: Barnes seems to be trying mightily to walk the fine line between sketching a full and accurate portrait of Sam Phillips and honoring his memory by not going too far into the dark corners. To be fair, her characterization of Phillips (whose family cooperated to a great extent in providing images for the book) does suggest a divided, flawed man capable of greatness and its opposite, just like everybody.

The author’s work at Sun – or, more accurately, for Phillips International, an associated label – included the key responsibility of writing and laying out an industry tip sheet of sorts called Scandal Sheet. In this periodical, Barnes not only highlighted current Sun and Phillips International releases, but weighed in on worthy material put out by – gasp! – Phillips’ competitors. Such a broad-minded vision is all but unthinkable in the modern marketplace, but Barnes was a pioneer of this even-handed approach. It’s the sort of thing only a true fan of the music (and a gifted writer) could think of pulling off.

While it’s a worthy gambit to draw interested readers, the book’s title is ever-so-misleading as well: there’s little in Barnes’ written history that suggests anything along the lines of a talent search. More representative is the throwaway line about Sun staffers making an enemy of the postal carrier by refusing any and all unsolicited “audition tapes” sent in the mail. And though Barnes’ own tastes in those days often ran toward the harder rhythm and blues stuff, she makes it clear that Phillips’ failure to appreciate the importance of country music (not to mention his failure to anticipate its commercial rise) helped lead to the demise of the label’s best years.

The Next Elvis tells one person’s story of her experiences at Sun during an important period, and so for anyone with even the mildest interest in the history of rock’n’roll, it’s a worthwhile read.