DVD Review: Money for Nothing 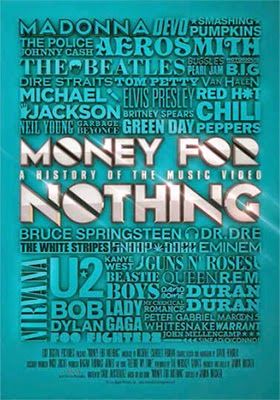 I approached this DVD with more than a bit of trepidation: would the filmmakers attempt to bestow great and weighty cultural importance upon the music video format? Or would they take a History Channel sort of approach to it, adding melodrama where little actually existed?

I was delightfully surprised when I viewed Money for Nothing: A History of the Music Video. The whole affair is aimed squarely at the sort of viewer who’s closely familiar with music videos in general. The 78-minute DVD is paced for the ADD generation(s), with the narrative broken into a long menu of bite-sized pieces, none lasting much longer than two minutes.

Money for Nothing charts the history of the music video via two timelines, two points of view. First, the form itself. After tossing a red herring or three the viewer’s way – suggesting that music videos began with MTV’s broadcast of The Buggles‘ “Video Killed the Radio Star” – the film tells us, hey, wait a minute. The Beatles‘ A Hard Day’s Night, right? But no: Money for Nothing rightly (if in exceedingly brief fashion) points to Scopitones (from the 1960s) “Soundies” (from the mid ’40s) and finally Walt Disney‘s Fantasia (1940), and even to early animated color films out of Germany in 1933.

But Money for Nothing never goes all academic on the viewer; like the subject it’s chronicling, the film keeps moving, never lingering on any image of idea for more than a brief second. Certainly the arc of MTV’s rise and fall is followed, since the Viacom cable channel was the embodiment of the medium for many years.

Money for Nothing isn’t afraid to chart the downfall of the form, and even makes its own suggestions as to why music videos became moribund on television (and why they still exist, albeit in a different form). The film rightly categorizes music videos as “advertisements,” but concedes that quite often it wasn’t clear what exactly was being sold.

Well, except when it was: fantasy and sex (and often both) are unsurprisingly the top items being pushed by music videos. Music videos have rarely been a means of delivering subtlety, and the film concedes that as well. But neither does Money for Nothing ridicule the form: it seems to suggest that music videos are a bit like a painter’s canvas, or a blank piece of paper: what is done with them depends largely on the artist.

And the “artist” is the focus of the second timeline the film follows: not the music artist, but rather the filmmaker. As the hundreds (literally hundreds) of film clips flicker across the screen, the bottom corner info lists the artist, album, director and year, just like good ol’ MTV did back when it broadcast music videos. And the second timeline explores the work of notable filmmakers. After giving props to the music video heavweights (Godley and Creme chief among them), I was surprised to see the names of so many well known motion picture directors among the credits: Julien Temple and Jonathan Demme, sure. But Jim Jarmusch, Martin Scorsese? Their participation helped legitimize the form. Or did it just help them pay some bills in a lean era? Money for Nothing leaves that call to the viewer.

The DVD isn’t without its flaws. While mentioning The Monkees as a key component in the early history of the music video, no mention is made of Mike Nesmith, the man who pretty much invented the idea of a channel that showed music videos all the time (he sold that idea to Viacom). And no mention is made of Paul Revere and the Raiders, even though they appeared on television mugging and miming to their songs more often than any other musical artist before or since. And while I’m not a particular fan of the videos, not a single clip (nor mention thereof) of the 1980s’ most ubiquitous music video trio, ZZ Top, shows up in Money for Nothing. (They also missed mentioning Todd Rundgren‘s important and pioneering work in music videos, but I’ll give ’em a pass on that one since he’s not the household name he deserves to be.)

Near its end, Money for Nothing largely concedes that the era of the music video has long since ended, but it makes the case that some interesting work is still being done in the form. (It manages to do so without mentioning YouTube; neat trick, that.) Like the ephemeral and ultimately fun if insubstantial form it chronicles, Money for Nothing isn’t a wholly satisfying film, but it’s the best look at the history of the music video that’s been done so far. Recommended.

Tags:money for nothing, virgil films