A Guest Feature by Annelise Kopp

J Mascis is the loudest acoustic show I’ve ever seen. During his September 28, 2014 show at Asheville NC’s Grey Eagle, J was seated onstage with two guitars nearby, and surrounded by three large guitar amplifiers. By his side were two large bottles of coconut water. For nearly the entirety of the show, Mascis sang and played with his eyes closed, occasionally opening them to turn a page in his song binder, switch guitars, or on rarer occasions look down at the stage, or – rarer yet – into the crowd. 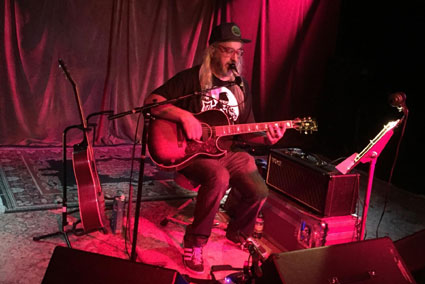 Mascis is most famous for being a founding member of Dinosaur Jr, the influential band who have been playing since the 80s. I had the pleasure of seeing Dinosaur Jr play at Atlanta’s Variety Playhouse in 2009. It was the loudest show of any kind that I’ve seen to date. Seeing J Mascis play in the intimate context of the Grey Eagle offered a new, and welcome, perspective.

Mascis has steadily maintained his solo career alongside his involvement in Dinosaur Jr; his solo dates began as a string of one-man acoustic shows. Dates on his 1995 tour were recorded, and yielded his first album, Martin + Me, which was released in 1996. Though he’s considered a guitar virtuoso, Mascis’ solo work has been more subtle in its musical expression.

Though he’s taken on an acoustic, folky sound in much of his solo work, what J is doing to a guitar can be classified as shredding. His raspy vocals layered over fuzzy – albeit more delicate – guitar melodies illuminate not only what J has contributed to Dinosaur Jr and the role he has played in the development and growth of their sound, but also the parts of his expression that just don’t fit into that vessel. When one listens to J’s solo work, it’s easy to think, “this is Dinosaur Jr!”

In 2011, Henry Rollins (once Black Flag frontman and now public speaker, actor, activist, musician (and the list goes on), opened for Dinosaur Jr on their Bug tour, revisiting their 1988 album in its entirety. For Rollins’ opening set, he broke from the spoken-word format he’s toured with in recent years, instead choosing to interview Dinosaur Jr, one of his favorite bands. Rollins, in a related radio interview for Seattle’s KEXP, queried the band: “You guys have been touring consistently throughout the 80s the 90s, and bravely and triumphantly through this new century as well. What does touring and playing as often as you all do mean to you? Still enthusiastic about playing every night? Is it still fun?”

Mascis, infamous for his elusiveness and brevity in interviews, came out with, “More than ever, yeah. I like it a lot better now then when I was a kid. I was… I dunno… more ungrateful I guess… and just kinda depressed or something.”

And you’d almost have to feel that way. Mascis has hardly taken a break from playing shows since playing in hardcore band Deep Wound with Lou Barlow (with whom he founded Dinosaur Jr just a few years later). That was in the early 1980s. Some twenty years later, Dinosaur Jr and J Mascis are still touring. Amidst this, Mascis has continued to release new albums with Dinosaur Jr, release solo material, and be involved in innumerable other projects.

Mascis has recorded with Kevin Drew of Broken Social Scene; played banjo on one of The Hold Steady’s albums; played guitar on GG Allin’s Hated in the Nation; and provided lead guitar tracks on Thurston Moore’s Trees Outside the Academy (which was also recorded in Mascis’ home studio).

It’s through his music that J connects with his fans. In spite of his insular stage presence and disinterest in exposing himself to interviewers, J communicates volumes of meaning through his work. His most recent solo albums, Several Shades of Why and Tied to a Star are accessible to Dinosaur Jr fans and new listeners alike. Still, like an intimate conversation with old friend, the experiences are different and illuminate interesting, sometimes profound, parts of who J Mascis is. Apart from J’s solo work in the context of Dinosaur Jr exists a catalog of work that speaks for itself through its different stages of maturity.

At the end of the show, Mascis exited stage right, eyes mostly to the floor as he stepped just outside the door, lingering briefly before returning to the stage. True to everything we’ve ever known of Mascis, the charade of the ever-standardized-encore was performed listlessly. He returned to play one final song and killed it. The crowd cheered, respectfully, because seeing J Mascis play live is seeing a modern legend.