I’m getting married today! And I’m so happy about it that I have a gift for my readers: an extra, weekend piece. This is an edited version of a feature that ran a couple of weeks ago in Asheville NC’s local altweekly, Mountain Xpress. — bk

New Orleans is rightly acclaimed as the birthplace of jazz, that most American of art forms. But the city’s rich, multi-ethnic heritage gave rise to an even earlier musical style. Though Mardi Gras Indian funk doesn’t enjoy jazz’s high profile, the lively and expressive form is kept alive through the music and performances of groups like 101 Runners. Recently in Asheville for two shows, Sep. 13 and 14, and featuring War Chief Juan Pardo, the group is an exemplar of the Mardi Gras Indian tradition, renowned for pageantry and reveling at Mardi Gras carnivals in New Orleans. 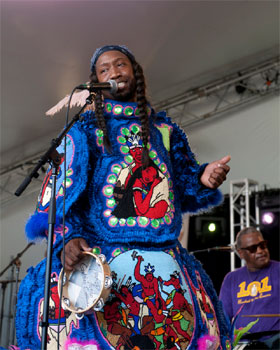 Band leader Chris Jones characterizes Mardi Gras Indian funk as the musical product of “a magic, mystical, spiritual and ancestral tradition” dating back to the late 1800s, a time during which “local Indian tribes and formerly enslaved African Americans had commonality.” These ethnic groups had common problems, and helped each other in many different ways. Centered around New Orleans’ Congo Market, they interacted freely and often, trading goods and mingling bloodlines. Jones points out that the oral tradition of singing, chanting and drumming that developed among the combined cultures is “relatively undocumented,” though some recordings by artists such as Jelly Roll Morton showcased the developing style. The first tribe debuted in the 1880s, calling itself The Creole Wild West; they remain active today. Jones considers the Mardi Gras Indian tradition “one of the most incredible subculture phenomena” in America: “two of the most oppressed peoples of the time were able – through craft and song – to form a bond that helped them weather the storm.” And that strength has helped the tradition continue to this day. “There’s a lot of mystery” to that tradition, Jones says. “A lot of things, they keep close to their vest.”

Asheville’s Goombay festival, then, is an ideal showcase for 101 Runners. The deep connection between Native Americans and African Americans is explored in the group’s percussion-centric music.

Perhaps the most well-known major group exploring the style was The Wild Tchoupitoulas; produced by Allen Toussaint, their 1976 album brought the style to national prominence. They added “a foundation of funk organization” to traditional tribal drumming. 101 Runners build on that style, further exploring the music’s African percussion roots. “A lot of the music starts with the chants and percussion, then the music comes in,” Jones explains. “Then we go on the musical journey together.” He laughs and sums it up as “organized chaos.” 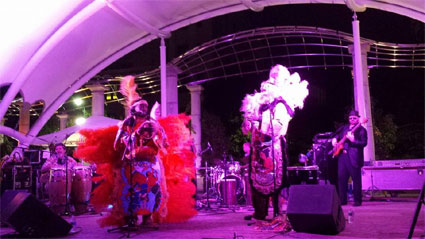 The band’s pair of Asheville dates – an “official Goombay after party” at New Mountain, and a parade and show to close out Goombay on Saturday night – featured African dancers and the flamboyantly dressed Mardi Gras Indians. 101 Runners widened their musical vision further to include a number of local Appalachian musicians who joined in. Jones has experience in this area: he conceived and produced the BlueBrass Project, a series of recordings that paired New Orleans and Appalachian musical styles. Asheville-based musicians Jay Sanders and Woody Wood are veteran members of the loosely-knit 101 Runners collective. Asheville concertgoers experienced a unique mashup of cultures and roots music styles. By focusing on that – plus the African elements highlighted in the Goombay festival – the group could “cross-pollinate.”

“They originally wanted us to play 45 minutes” at Goombay, Jones says. “That’s like two tunes for us!” 101 Runners negotiated to play longer. But Jones stresses that the dance-oriented, partying Mardi Gras Indian funk is about fun; it’s not “deep and trippy and jammy.”

Jones says that War Chief Juan Pardo “spends countless hours” creating his outfit; the result is full of beads, feathers, rhinestones and other colorful ornamentation. There’s nothing like a 101 Runners performance, promises Jones. Onstage, 101 Runners are “never the same thing twice. In ten years, we’ve had two rehearsals. And one of them was terrible!” Jones observes that the ancestral nature of the music – paying tribute to so many American traditions – can often “wake up some of the ones who came before. One thing I learned really early was not to put any confines on it. We let the music take us where it goes; it’s moving artistic expression.”