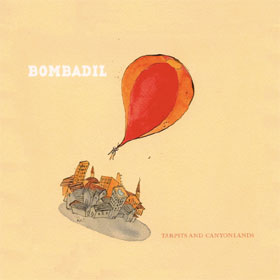 With a slightly more arty take on the approach favored by bands like Fleet Foxes, on Tarpits and Canyonlands, Durham NC-based Bombadil crafts a music that feels like equal parts Americana, baroque art-pop, and quirky Van Dyke Parks-styled worldAmericana. Metallic-sounding tack piano forms the centerpiece of many of the disc’s arrangements, but out-front vocal harmonies figure largely in the group’s sound, too.

But before you start thinking that Tarpits and Canyonlands is some sort of bandwagon-jumping exercise designed to glom on to the success of Fleet Foxes and their ilk, consider this: the album was originally released back in 2009, upon which it sank with nary a trace. A number of serious setbacks contributed to the album’s failure-to-launch, but the most serious setback occurred when band member Daniel Michalak (“considered the band’s driving force,” sayeth the press kit) was waylaid with a serious – and incapacitating – medical condition called neural tension. So despite some early positive reviews, Bombadil disappeared from sight, taking the promise of Tarpits and Canyonlands with them.

After five years(!) of treatment of most ever kind, Michalak started to get better. But things went slowly…very slowly. In 2012 Bombadil finally took to the road for a tour, which went well.

Well, now it’s 2014. Earlier this year the band – rightly convinced of the quality of their largely overlooked 2009 album – reissued Tarpits and Canyonlands. But they didn’t simply burn up a stack of CDs. Oh, no: Tarpits and Canyonlands has been given the most lavish reissue/repackage one can imagine. A sprawling 2LP vinyl set comes housed in the sturdiest gatefold sleeve I’ve ever seen, complete with artwork and extra goodies that border on the precious. But for a standout album of its quality, the lavish treatment makes sense.

In connection with the reissue, Bombadil returned to the road; the next several weeks will see the band take a southern swing, with October dates in Ohio, then Virginia, two dates in their home state of North Carolina, two in Georgia (Atlanta and Athens, natch), and three in Tennessee (Gatlinburg, Nashville, and Knoxville.