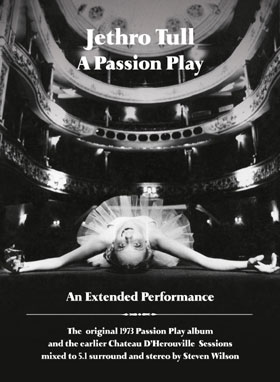 Unlike, say, Creedence Clearwater Revivial – or even The Beatles – Jethro Tull have rarely been anyone’s idea of a “singles group.” As the leading folk-prog group of the rock era, the Ian Anderson-led group released a steady line of albums, one a year from 1968-80. And many of those did spawn a single: seven of the group’s 45s in that period charted in the USA, and five made the UK charts. (There’s little overlap in those two lists, suggesting that Tull’s appeal was quite different to American and British audiences.)

But of course, from a commercial point of view (and an artistic one, as well), albums and singles are aimed at different segments of the listening audiences. While the group’s 1973 album A Passion Play spawned only one single (“A Passion Play” [edit 8] b/w “A Passion Play” [edit 9]), and it reached only the lower rungs of the charts in the USA (and Germany), the album itself was a number-one hit stateside. Some of that success could be down to its following on the heels of the band’s biggest success, the previous year’s Thick as a Brick. And like that record, A Passion Play is designed as a single piece of music, designed to be taken as a whole.

In 2003, a CD version of A Passion Play was released; it included a bonus video track, but otherwise offered no new tracks. Now in 2014, Chrysalis has released a sprawling, four-disc set, filled with goodies.

The first disc features the original A Passion Play album but it’s been given a new stereo remix by Porcupine Tree‘s Steven Wilson; Wilson has previously performed his stellar remix work on catalog items from King Crimson and Caravan, as well as on other Tull albums. Wilson has a knack – no doubt aided by modern technology that simply didn’t exist back in the 70s – for bringing out previously buried sonic elements in these forty-year-old tapes. In some cases, it’s a matter of limitations on the number of available tracks back in the 1970s; artists would often fill up the multitracks, then “mix down” to fewer tracks, then continue. The result would effective set in stone the early parts of the mix, and each “bounce” caused a slight (but noteworthy) loss in fidelity.

With today’s digital technology, the number of tracks is limited only by the size of the studio’s hard drive (in practical terms, that’s limitless). So Wilson is able to go back to all of the first-generation discrete tracks for each instrument, vocal and sound effect (when the tracks are available) and construct a new mix using all first-generation audio signals. Add his talent, creativity and keen ear, and the results are fantastic.

The sessions that yielded what we now know as A Passion Play were in fact the second attempt that Anderson and his bandmates made at a followup to Thick as a Brick. In 1973 Jethro Tull decamped to Château D’Hérouville studios and recorded a full album’s worth of material; ultimately it was not used. For this expanded reissue of A Passion Play, Steven Wilson has constructed a new remix based on those sessions; this material fills the second CD in the set.

As was done on other Wilson remixes, this set also includes the material in higher bitrate, in a number of formats. The third disc – a region-free DVD – features Wilson’s A Passion Play remix in DTS 96/24 5.1 Surround; Dolby Digital AC3 5.1 Surround; and 96/24 PCM. You’ll need a DVD-A-compatible player to read that data, of course. And quite honestly, you’ll need ears not damaged by decades of loud rock’n’roll to appreciate Wilson’s work in full; to me, it all certainly sounds splendid, but I imagine that there’s a lot I’m unable to hear.

The third disc also includes some related video content: a music video for A Passion Play‘s “The Story of the Hare Who Lost His Spectacles,” and film footage used onstage during Jethro Tull’s concerts in support of the album. The fourth disc gives the Château D’Hérouville sessions the same high-bitrate treatment.

The entire affair is packaged in a hardcover book (roughly the size of an old Hardy Boys mystery) and includes an expansive 80-page booklet. In addition to Wilson’s notes on the remixes, a lengthy and enlightening essay from Martin Webb (based on interviews with the players on the sessions), there are various other bits of photos, clippings, quotes and the like. The compilers have endeavored to create an “ultimate” version of Jethro Tull’s 1973 work product, and they’ve succeeded on most every level.