It’s not easy putting together the lineup for a music festival. All sorts of competing forces work against each other in the planning process. You want a lineup that’s cutting-edge, but you need to keep it accessible enough to sell tickets. You want an eclectic lineup, but you also might want to make selections based upon some sort of overarching theme.

The organizers of Transfigurations II – a celebration of the anniversary of Asheville NC-based Harvest Records, previewed here – threaded the needle with this year’s festival. The lineup drew from a wide array of genres, wide enough to appeal to aficionados of the out-there as well as to the mildly adventurous festival-goer.

I wasn’t able to make it to either of the first two nights – held at local Asheville clubs – but I enjoyed an afternoon and evening on Blennerhassett Island in nearby Marshall NC, site of the Saturday segment of the festival. Set up across three stages, the festival featured a small outdoor stage near the water for solo- and small acts (amplified acoustic and such), a large outdoor stage, and an indoor stage in the gymnasium building of what used to be a school. I bumped into a friend at the festival, and in conversation, we decided that the crowd numbered around 500-800 people, a nice size if you’re attending. I estimated the crowd’s mean age to be about half my own, but there really was music for all tastes here. Food and beer lines weren’t overly long, and one could get as close to the performer as one wished (more on that later). 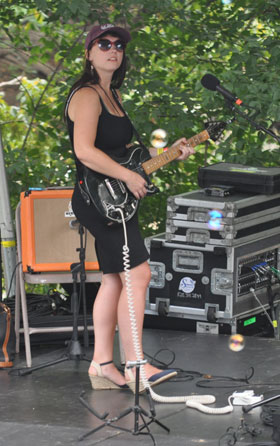 Upon arriving, I caught a few minutes of the tail-end of Steve Gunn‘s set on the big outdoor stage. My initial impression – commenting on both the band and Gunn’s vocals – was that the whole thing sounded a bit like The Grateful Dead backing Greg Lake.

Next, Asheville-based Angel Olsen appeared on the small outdoor stage solo, accompanied only by a solidbody electric guitar. Her angsty, heartfelt melodies were delivered by the amped-up, slightly distorted guitar, yet she played in a folky style. Her vocals included a fair amount of what might be termed yodeling. Not exactly my cup of tea, but Olsen is clearly very good at what she does, she seems quite free of artifice, and the sizable crowd (which grew as her set went on) was enthralled, thoroughly enjoying her performance. 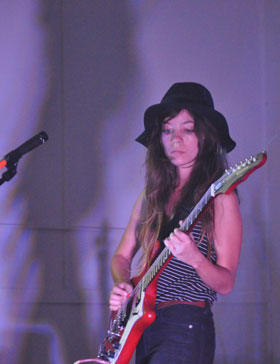 When Olsen finished, I walked the couple-dozen steps to the indoor stage where Quilt would perform. They hadn’t quite started their set yet, so I walked up front to take a closer look at their onstage gear. I was surprised and delighted to find a Rheem combo organ. Rheems are somewhat rare beasts; as combo-organ.com notes, the company is best known for their water heaters (no, really). The Mark VII that Quilt had was in excellent shape, unexpected for a keyboard manufactured 1966-68 or so. Though I had never heard the group, I knew that Quilt was described as “dream psychedelic,” and that alone was enough to pique my interest. Seeing the Rheem organ suggested to me that they might be (or at least sound like ) the genuine article. 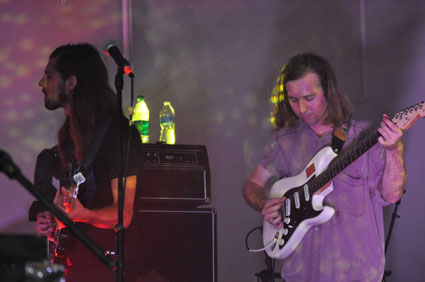 Indeed they were. The four-piece stuck mostly to original material from their two albums, and while there was a faint whiff of “Paisley Underground” about their sound, for the most part their hypnotic-yet-catchy songs didn’t sound like anyone else in particular. Though this was a daytime set in a sunlight-filled gym, eventually the sun moved just enough (Blennerhassett Island is surrounded by mountains) so about mid-set, the room dimmed a bit. 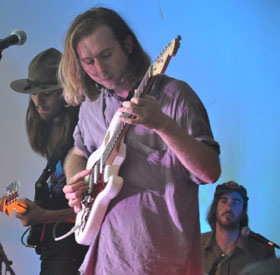 That meant that the way-cool vari-lites and projections cast the desired effect upon the group, giving them a look highly reminiscent of the photo on the back cover of The Velvet Underground With Nico. The kind of music they played – though more hooky than even the Velvets’ most pop-oriented tunes – only heightened the similarity. My comment at the time was, “I have t-shirts older than them, but they ‘get’ it.” I bought their (vinyl) album at the merch table as soon as their set was over.