Ken Stringfellow: Listening to Failure, it would be hard to tell what we were listening to. Because the album has a very sixties vibe to it, kind of like if some sixties beat group moved to California. But I can give you a breakdown that will show you where some of these songs came from. I can tell you what I think they’re direct rip-offs of, and you’ll see through the sixties-ness of them to the original source.

“Under Easy” sounds a bit like The Byrds or something like that. But it really is [based on] a Bob Mould song. There’s so many Bob Mouldisms in the chord progression and melody; it’s just that the production fools you into thinking it’s sixties-based. We were absolutely obsessed with Hüsker Dü; they were heading into a more songwriter-y vibe; they had left the punk sound behind. 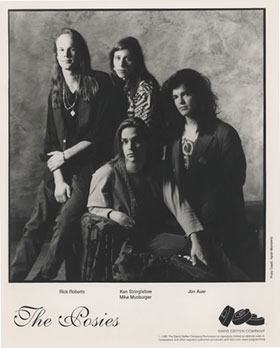 Jon Auer: Two bands that we absolutely worshiped were The Replacements and Hüsker Dü.

Ken: “At Least for Now” is maybe a little closer to its source. It’s a less agonized version of a Paul Westerberg song. Imagine it as a slightly more cheerful version of “Here Comes a Regular.” We were massive Replacements fans. And what was a nice turnaround is that when this record got released as an LP and started to get national airplay, it really became a favorite of Paul Westerberg’s. He took us on tour shortly thereafter.

“I May Hate You Sometimes” seems like it’s some sort of Beatles ’65 thing, but if you listen to the wordplay and the nonstop vocals, it’s a little bit of Elvis Costello. It’s a title that has so much irony in it that it’s not clever enough to be great irony.

Jon: You can certainly hear the influence of The Beatles, but any record made past a certain time has that influence on it. If you wanted to compare “I May Hate You Sometimes” with “The Word” from Rubber Soul, we copied the cowbell, the percussion track. It’s pretty much an homage; we just ripped ’em off.

Ken: Of course we had the sixties music influence because of our parents and their record collections – those were the first records we were encountering – but at the time, we listened to a lot of the great, clever songwriters of the UK scene: Squeeze, XTC. In fact the drum intro in “Paint Me” is directly lifted from XTC’s “Ball and Chain.”

Jon: A band that cannot be underrated as an influence upon us at the time is XTC. So while we were into the sixties scene, we were influenced by artists who had been influenced by it as well. Skylarking is one of my favorite records; so much so that on our album Frosting on the Beater, we tried to sequence the songs in the same way that they did on Skylarking. I’m giving you way too much information; you get the gist.

Ken: “The Longest Line” is [based on] a Smiths song on Meat is Murder. And you can hear REM influence on “Believe in Something Other than Yourself,” even down to the chord progressions. It’s dangerously close to the chorus of “Radio Free Europe.” And there’s a thing in “What Little Remains” with a kind of reverb-y backing vocal; that’s directly ripped off from REM’s “Pilgrimage.”

I was really into the California punk scene with Black Flag and Dead Kennedys; and Blue Note Records stuff was a big influence on me…even though there’s no bebop on this album. We were into a little bit of everything. Being small town people as we were, in the pre-internet age, music listening was based on opportunity, on what things came your way. At this time, we were still learning. We weren’t old and experienced enough to have a body of work to synthesize into new things.

I love musical quotes; now I like to weave a musical pun into every album I make. But I vary it, and most people never discover them. At that time we were less subtle. 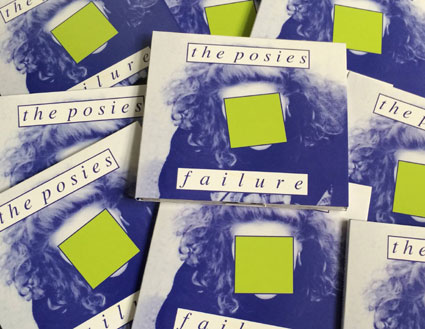 Bill Kopp: Your vocal harmonies have long been the main signature of The Posies. When you started out – and now, even – did you have to carefully work those individual parts out, or did they evolve naturally as you worked on the songs?

Jon: The singing is probably one of the most natural things about The Posies. This is going to sound horrible, but Ken and I were in the choir at our school. So even though we weren’t singing together in a band per se, we were learning about things like harmonies and counterpoint. To even further the geek ante here, we had extracurricular activities together that involved singing: we were in a thing called jazz choir. And to make us sound even geekier, we did that in the mornings before our first class. We didn’t wait until after school; no, we got up an hour earlier to go to this thing.

Bill: So I suppose whether it was conscious or not, there was a fair amount of musical theory underpinning your vocal arrangements on Failure…

Ken: The harmony vocal parts came very quickly, very easily. The chord progressions lend themselves very easily to being made with harmonies. That was always there with us; they were not labored over. There’s a lower second harmony in the verse of “Under Easy.” That just happened on the spot.

Jon: If people ask me what makes The Posies unique, I’d say its the harmonies. We did all of the vocals for the album in one weekend. Lead, harmony and backing vocals – all of them for that record – were done in a two-day period. All twelve songs.