Everything Comes Together: The Paul & John Interview, Part Three

The album that would become Inner Sunset was announced in 2013, but the project’s gestation was a lengthy process, especially when compared to the quick, DIY measure employed by most other artists on the Mystery Lawn label. “Several factors contributed to the album taking so long to come out,” John Moremen explains. “First, we wanted to record it at Mystery Lawn Studio with Allen Clapp engineering. It was a very busy four-year period for Allen, working with The Corner Laughers, Alison Levy, Jim Ruiz, Agony Aunts, William Cleere, Marshall Holland and [John Moremen’s] Flotation Device. We had to wait until Allen and the studio were available.” Paul Myers stresses that “Allen was ridiculously generous with his time, resources and talent, but that often meant we had to wait while The Orange Peels recorded and toured, or while other Mystery Lawn people had their turn with him.” 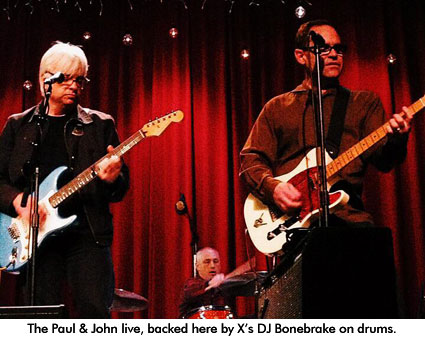 And while The Paul & John‘s mid-project decision to use only newer songs resulted in a better record, that too set the completion date back somewhat. “Over the course of four years,” says Myers, “our sound evolved, and the later songs were better than the early ones. We’d decided that there’d be no filler or dead weight songs; every moment had to be uniformly ‘awesome,’ if only to ourselves.” Moremen notes that “we completely rewrote the album about a year after we started working on it.” And that, Myers adds, “meant throwing out stuff, re-cutting some stuff, and writing new stuff. Time flies when you’re having fun.”

Moreoever, while Inner Sunset is a carefully crafted work from start to finish, it’s the product of two men who remain very involved in a multitude of other musical (and music-related) endeavors. “ We aren’t a day-to-day thing,” Paul Myers points out. “We both have other projects and jobs, so we end up taking weeks and months to accomplish what some bands do in a couple of days.” During the years leading up to the eventual release of Inner Sunset, music journalist/author Myers was writing and doing promotional work for A Wizard / A True Star, his excellent book on Todd Rundgren. Meanwhile, Moremen was “busy working on The Orange Peels’ Sun Moon album, recording a new album with Flotation Device and playing shows with Alison Levy, Roy Loney, and Half Japanese.” He laughs and says that “It’s kind of a miracle that we finished Inner Sunset with all those other projects happening.” 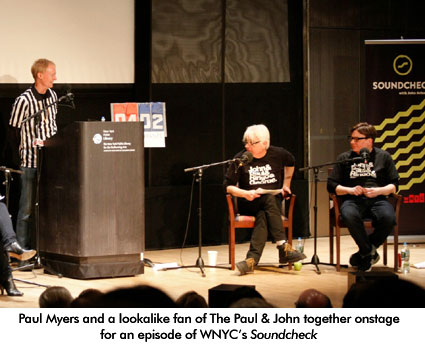 Yet another factor that affected the release timetable for Inner Sunset was the pair’s reliance upon crowd funding to finance the album. “I was a nervous wreck when we first launched our Kickstarter and donations weren’t coming right away,” Myers candidly admits. “You start to doubt your mission, and for me, it stirred up old demons about social popularity. Insecurities run deep with me, and I really began to feel scared.” But once word got out about the planned album, support grew quickly. “The best part was the overwhelming support,” Moremen says. “People really, really wanted to see this album come out. We had so many positive vibes coming our way from so many people wishing us well.” As the funding deadline approached, fans rallied. Myers explains that “in the final weeks, the drought lifted, and a deluge of pledges came in. We exceeded our goal. So now, I feel gratified that people really did care. And I hope they actually play and enjoy the record.”

And though it was ultimately successful, Myers and Moremen learned a lot from the Kickstarter experience. “The next time I do one of these, I’m going to put a little more planning into it regarding budgeting,” says Moremen. Striking a hopeful note, he adds, “the next one should be a lot easier!” Myers sums up the crowdfunding concept in a single sentence: “People ultimately love to help creative people bring their artistic dreams to life.”

The Paul & John’s Inner Sunset is available now from Mystery Lawn Music. And as Todd Rundgren, one of Myers’ musical heroes, might say “And there’s more.” Paul says, “we’re putting together the live band [a record release show in San Francisco is scheduled for October 30], and we hope to start writing more songs together real soon. That’s where it all starts for me. I really hope it’s not another four years until a follow up!”