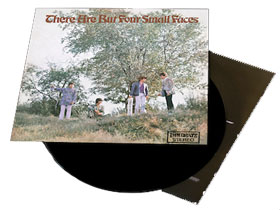 History has a way of playing tricks on us. How many of us American fans of Beach Boys music remember that Pet Sounds was – upon its original release – considered something of a commercial failure? The album’s subsequent elevation into the Pantheon of great albums has caused us to forget that inconvenient bit of trivia.

So, too, do many of us – and I’m first thinking of myself here – fail to recall that as impressive a body of work as they created, The Small Faces were not hit makers on the US charts. Chalk it up to any of several factors: “they were too British” is a common explanation. They themselves in interviews have opined that their lack of touring stateside had a good deal to do with it.

No matter. The music they created is filled with charms. And with the benefit of hindsight and context, it’s very much of a piece with the best of the era’s rock, and doubtless influenced those other artists who did hear it.

The group’s 1967 album There Are But Four Small Faces may well be the group’s most accessible entry point for the uninitiated. The following year’s legendary Ogden’s Nut Gone Flake is arguably even better, yet at the same time more idiosyncratic, giving rise to those “too British” sentiments. But on There Are But Four Small Faces, the quartet’s brand of rhythm and blues-influenced rock meshes nicely with Summer of Love styles and sentiments. From the memorable “it’s all too beautiful” refrain of “Itchycoo Park” to Kenney Jones‘ phase-shifter-treated drum fills on the same tune, the album is that rarest of creatures: very much of its time, yet somehow timeless. The stomping r&b of “Talk to You” – featuring some lovely piano figures from Ian McLagan – is a near perfect balance of finely-tuned subtlety and uncompromising rock. Throughout the twelve-track album – now reissued on vinyl alongside a 2CD version that features stereo and (DJ promo) mono mixes and bonus tracks – the Small Faces assert their right to the label “best British band you’re least familiar with.” 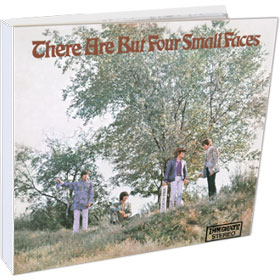 “I’m Only Dreaming” utilizes gentle piano and vibes, and finds Steve Marriott leaning in a melodramatic crooner direction, but the song’s dynamics include plenty of space for the vocalist to belt it out as well; that shift in tone inside a song was a hallmark of the group, and served to showcase all of their strengths within the confines of a three-minute (or so) pop tune. And echoes of that style can be heard in subsequent material from The Marmalade and Grapefruit, two of the many acts greatly influenced by The Small Faces. (The fact that you may well not have heard of those groups is yet further testament to The Small Faces limited commercial reach in the 60s).

“I Feel Much Better” weds a twee “do waddy waddy / shang a lang” vocal chant to some thunderous bottom-end work from bassist Ronnie Lane; the group seemingly had an endless knack for melding the sweet and sour, the light and the heavy.

The album’s song most well-known (to Americans) is “Tin Soldier.” McLagan’s memorable electric piano introduction, followed by an overdubbed organ, joined then by Marriott’s crunchy lead and the rest of the band: all these together would be enough to render the tune a stone classic. But it develops from there, showcasing the ace riffage and vocal-cord-shredding performance from Marriott and his band mates.

Perhaps it’s mild overstatement to compare a brief tune such as “Get Yourself Together” to the mini-operas Pete Townshend was writing – see: “A Quick One (While He’s Away)” – but the variety put into Small Faces tunes such as this often rivaled the intricacy of late 60s songs from The Who.

“Show Me the Way” (not the later Peter Frampton tune) is built around some very baroque harpsichord work from McLagan; it’s the most of-its-time sounding track on There Are But Four Small Faces, but it’s an understated gem nonetheless.

Owing to its clear drug-taking lyrical references, “Here Come the Nice” was a controversial tune in the UK. But that didn’t keep it from being a great tune. And “Green Circles” is reminiscent of some of the Yardbirds’ late-period pop experiments; again that combination of heavy rock and light-classic influenced pop is a winning recipe.

The album wraps with “(Tell Me) Have You Ever Seen Me,” ensuring that There Are But Four Small Faces is a no-filler album, itself a rarity in the mid 60s. The CD reissue version’s inclusion of the mono mixes – designed for maximum impact on AM radio – are enjoyable in their own way, but as the stereo album is relatively free of wide-panning stereo gimmickry, the two mixes are not a world away from one another. The CD set comes in a very nice hardbound book, plus a well-put-together booklet of photos and essays. But there’s something about the vinyl. Unlike me, you might not need both. But if you appreciate any of the best rock the mid 60s had to offer, you need at least one.