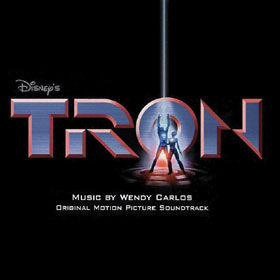 The soundtrack of the 1982 motion picture TRON showcased the work of synthesist-composer Wendy Carlos in a more commercial context than was normally the case for her work. A new 2LP edition restores deleted material that wouldn’t fit on the original single-LP version.

After the brief “Creation of TRON,” which barely registers as a tune, “Only Solutions” features – of all things – Journey, doing what soundtrack supervisor Michael Fremer characterizes as their best Police impersonation. (The Police were in fact Fremer’s first choice to provide the required pop track for the film.) Aside from gated reverb drums, it’s not a bad tune. Journey were near the apex of their commercial viability in ’82, and — consistent with the tenor of the times — the studio (Disney) threatened not to release a soundtrack album without a potential single.

Most of the remainder of the TRON soundtrack album is Carlos’ work. Perhaps surprisingly, the material is the opposite of what one might suspect: the orchestral parts – courtesy the London Philharmonic Orchestra – were cut first; only then did Carlos judiciously add her synthesizer parts to the score. The result is an album that’s richer – and far less dated – than synth-centric works tend to be.

Like any science fiction movie with dramatic content, parts of the TRON score recall Gustav Holst‘s “Mars, the Bringer of War” from The Planets. But Carlos does so in a way that’s not overstated; her synth parts on “Ring Game and Escape” put more sonic distance between her and Holst.

Clearly, the music was intended to convey and support the emotional themes displayed on celluloid: the workmanlike titles (“Love Theme,” “Ending Titles”) make that explicit. But the music stands well on its own. Carlos’ synthesizers do form the basis of a few tracks, most notably “TRON Scherzo.”

The Sweeping, magisterial “Miracle and Magician” wouldn’t be out of place in one of the Lord of the Rings films. And “Theme from TRON” has almost no synth, Carlos’ composition relying instead on the LSO for its delivery. “1990’s Theme” is Journey’s second and last appearance on the soundtrack. As an instrumental theme, it works well. But as the track is full of what now sound like 80s pop tropes, its whiny guitar effects and stiff drum tracks feel dated.

With heavenly choirs and orchestral arrangement, “Love Theme” seems a bit over the top; but probably fit perfectly with its film scene. If you were a kid when you saw TRON, this is probably the moment in the film when you got up and went for another bucket of popcorn.

“Tower Music – Let Us Pray” is the album’s most effective pairing of electronic and orchestral sounds; unless one listens very closely, it is difficult to discern which sounds are from which. And on a good stereo system, the lower register notes on “Sea of Simulation” will shake your home’s foundation.

“Ending Titles” brings things to a close with some sumptuous pipe organ work under the film’s closing credits; it’s a fitting end to an evocative score.

The new 2014 2LP version of the TRON soundtrack benefits from a remaster, and spreading music onto two discs allows a louder and clearer sound overall. About the only thing that could have been done to improve this vinyl reissue would have been to make one disc translucent red, the other blue. (Both records are blue on my review copy.)

The excellent liner notes (a Wendy Carlos-penned essay from the 2001 CD release, plus a 2014 essay from Fremer) help place this groundbreaking and forward-looking soundtrack album in its proper historical context.