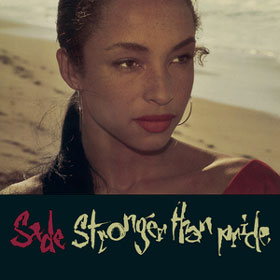 Love is Stronger Than Pride, the third album from Sade (the band named after lead vocalist Sade Adu) was a commercial juggernaut on its original 1988 release, yielding four hit singles in eight months, three of which made the US charts. With its recent reissue, now seems as good a time as any to review it with the hindsight of more than a quarter century(!)

Sade Adu could be considered an Astrud Gilberto for the late 1980s; though Sade’s music wasn’t categorized as jazz, it had an exotic, world-music vibe that was a key ingredient of its success. The soft and sultry voiced chanteuse crafted albums full of mellow, generally minimalistic instrumentation.

The title track opens the record in characteristic fashion, with guitar leads held until near the song’s end. The nearly cymbal-free percussion feels like hand drumming. “Paradise” moves in a more uptempo, dance-oriented direction, though – like most all Sade songs – it never finds its way into rock territory. The tune stakes out a hypnotic beat, while Adu’s overdubbed vocal harmonies are joined here and there by breathy backing vocals.

The sleek arrangement features lyrics that won’t be most people’s idea of groundbreaking poetry, but neither will they embarrass the group. Musically, it’s little more than a two chord jam that goes nowhere, but it doesn’t really need to. It’s greater than sum of its relatively humble parts.

“Nothing Can Come Between Us” starts off as if it were “Paradise, Part Two,” but some nice dialogue between bass and guitar (with electric piano backing) improves things. The song’s reliance (once again) on but two chords threatens to become problematic. For all its charms, it’s a vamp in search of a song.

The Spanish guitar figures that form the basis of “Haunt Me” offer a welcome change from the album’s stasis. Graceful acoustic guitar and Andrew Hale‘s agile piano backing provide a backdrop for Adu’s smooth, yearning vocal. A soulful saxophone solo and subtle string section work provide texture. The album credits mention a solo violin on this track, but it’s so low-key as to be nearly inaudible.

“Turn My Back On You” approaches funk territory – or what passes for funk on a Sade album– in a muted fashion. Here Adu explores the upper register of her vocal range. For the first (and thankfully, almost only) time on Love is Stronger than Pride, the drums have a heavily processed, 80s feel to them. The song is built upon an unusual time signature, but – like many components of the group’s music – it’s so subtle as to be barely noticeable.

“Keep Looking” is more in keeping with Sade’s signature slick European style; as ever Adu seems not to be breaking a sweat cutting her vocal parts. Some tasty guitar soloing from Stuart Matthewman once again mines a Spanish style. “Clean Heart” doesn’t veer far from the confines already established on the disc, but it does feature one of the album’s stronger melodic lines. The track also features some appealing brass section work that’s not heard elsewhere on the record. Congas enliven “Give It Up,” but overall the album’s homogeneity starts to wear thin for the listener interested in a bit of sonic variety. Electric piano gives “I Never Thought I’d See the Day” a contemplative air; the song is pretty but underdeveloped.

It’s curious, then, that Sade would choose to close their third long player with “Siempre Hay Esperanza,” an instrumental groove. The track is pleasant enough but — here we go again — fails to go anywhere; a single bass figure atop an exceedingly subtle two-chord vamp is about all that happens here. But the backing does provide a suitable showcase for some sax work.

In 2014, Audio Fidelity has reissued Love is Stronger Than Pride on limited-edition, 180-gram vinyl. The audio has been remastered, and discs are issued in limited, numbered editions. The sturdy and heavy gatefold sleeve opens to display a full set of lyrics and a curiously low-quality (scanned?) photo of the group. Sade Adu penned all the lyrics, and had a hand in writing all of the album’s music; she also arranged and produced the sessions, which took place in Nassau and Paris. The group would wait four years to follow the album up; 1992’s Love Deluxe offered more of the same styles, and once again charted worldwide.