Last week, my fianceé and I bumped into an old acquaintance of mine; he is a guitarist who, back in 2005, my then-current band had tried to recruit. It hadn’t worked out at the time, but I always remembered him as an especially good-natured and versatile player. When we were chatting, he mentioned that he had recently spoken to a woman who really liked that old band I had; sometime in 2005, we had played for her birthday party. Apparently now she was interested in asking if we’d re-form to play her upcoming birthday.

I replied to him that – for a long and occasionally unpleasant list of reasons – that would be extremely unlikely to happen, but the conversation did get me to thinking about that old band, and the highlight of its time together.

A little over eight years ago, I enjoyed a once-in-a-lifetime experience. While I have been in bands on and off since 1980, it has been the rare case in which I’ve ended up playing a nice stage in a classy venue. As a (mostly) cover-band musician, I’ve generally found myself onstage in places with names like The Shovelhead Saloon, Frank’s Buckboard and the like, playing to often disinterested and/or drunk crowds.

This was different. And it almost didn’t happen.

In the aftermath of the death of my good friend and lead guitarist Dave, my bandmate and friend Mike decided we’d try again to put together a group. We got with Dave’s surviving girlfriend Susie, and she brought along her friend Debbie, an expert at crafting vocal arrangements. Eventually we added my then-wife Joan to compete the female vocal front line, and we held auditions and settled on a guitarist and a bassist. (The guitar slot would change often in the band’s brief existence.)

As we built our song list – focusing on “sunshine pop” of the 60s with strong emphasis on vocals, since five of us sang – we also began looking for gigs. We found quite a few local engagements; most of these were private parties, events and the like. We were not what you would call a “bar band,” and since in 2005-6 smoking was still allowed in North Carolina bars, we were none too keen on that kind of gig anyway. 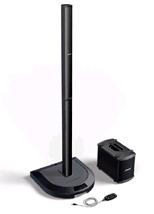 One among our membership had a good deal of disposable income, and was often adding instruments to his collection. He kept up with the latest and greatest technological developments to a much greater extent than did the rest of us, and so it was he who first told us about a new PA system developed by Bose, the high-end audio company based in suburban Boston. Bose was attempting to break into the live sound reinforcement market with something they called the Cylindrical Radiator. To me, the thing looked like a portable basketball hoop with out the net and backboard. The round-ish base was about two feet across, and held most of the electronics. The pole was filled with loads of tiny speakers, a precursor to the sound towers now common in home theater setups.

As it happened, our bandmate decided to take a stab at an endorsement deal: he sent a letter to the Bose people, enclosing a CDR with a few of our performances on it. I seriously doubt he expected any sort of response.

To everyone’s surprise, he got one. The marketing people at Bose HQ liked our covers of tunes like “Sunday Will Never Be the Same” by Spanky and Our Gang, and “Happy Together” by The Turtles. And they made us an offer: (please) come to Boston and play a concert for us at our facility, and we’ll send you home with loads of equipment, yours to keep.

Oh: I left out a little detail. Right around this time, that wife I mentioned earlier informed me that she didn’t want to be married (to me) any longer. (It’s cool: eight years have passed, and we’re friendly now.) But at the time, this – as you might well imagine – put the band’s future in no small peril. As it happened, she and I agreed that we wanted to keep the band together and do this gig. So several weeks later, I, my estranged spouse, and my buddy Mike road-tripped the fourteen-plus hour drive north to Massachusetts. The other members traveled their own ways: some flew, and I believe one tacked Boston onto an already-scheduled vacation. The guitarist – quite understandably – decided the whole venture wasn’t worth the effort, and declined to make the trip.

But we did need a guitarist. My long-time friend Jim lives just outside of Boston; he and I played together in a band back in the 1990s when we both lived in the suburbs of Atlanta. I asked him if he’d like to do a one-off gig at Bose: all he had to do was learn a dozen or so tunes on his own. There would be no practice nor rehearsal. He gamely agreed, and he and his wife even allowed me and a few of my bandmates to crash at his place to save on expenses. 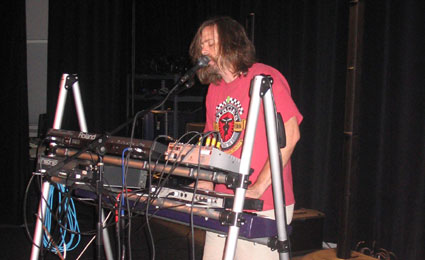 The author onstage for soundcheck at Bose HQ, Boston, June 2006

The day of the gig arrived, and we showed up at Bose. We were quite surprised at the VIP treatment lavished upon us: we were invited to dine in the corporate cafeteria; we were given access to a comfortable and well-appointed “green room” (quite different from the filthy bar bathrooms in which I’d usually dress for a gig), and – best of all – we had plenty of time to set up.

The venue was a “listening room,” full of chairs and a large, well-lit stage. As it was explained to us, Bose had promoted our performance locally ahead of time; tickets were free, but they had to be reserved in advance. The room held about eighty or so people, and it would filled to capacity for our show.

The stage itself was largely unadorned: the back wall, however, had nine of those Bose PA systems lined up and evenly spaced. One for each of our voices and instruments, we were told. The house sound engineer was on hand to guide us through this unconventional setup, and sound check went off without incident. We even had some time to run through two or three of the tunes for the first time with Jim on guitar.

Just prior to showtime, we were asked to wait backstage while the emcee introduced us. This was yet another first for me: I was used to wandering out onstage with the band, announcing our presence, and starting the music. Or this performance, we entered the room single file to the sound of room-filling applause. It didn’t seem real, and my memory of it sometimes feels like I’m remembering someone else’s experience.

The show went smoothly, with some between-song banter that nicely strode the gap between rehearsed and off-the-cuff. The seated audience was enthusiastic and engaged. When we prepared to launch into a cover of The Spiral Starecase‘s “More Today Than Yesterday,” I bought a bit of time by narrating what I was doing: loading a “brass section” sample (on floppy disk) into my Ensoniq Mirage synthesizer, a machine that was vintage equipment even in 2006.

The set ended as it began, with plenty of heartfelt applause. Our new equipment was shipped to us in Asheville not long thereafter. The band folded a few months later, after I organized and executed a final gig at Asheville’s Orange Peel, featuring a reshuffled lineup. As we all went our separate ways, the bounty of Bose equipment was sold off; with my share of the proceeds I bought an old but fully restored analog synthesizer.

The Bose people were kind enough to capture the entire performance in digital audio, one audio file for each of the nine PA towers. Sometime after the band ceased to exist, one member took those files into a local studio and got them mixed down to stereo. I still have a CD somewhere, and as I recall, it sounds pretty good.

Since then, more often than not, it’s been back to the bars for me, though in my most recent musical endeavor, I’ve been playing original music (written by the band’s leader) in some very nice musical venues. But every once in a great while – and I’m not especially nostalgic by nature, especially for the year 2006 – I think back on that experience, and I smile.